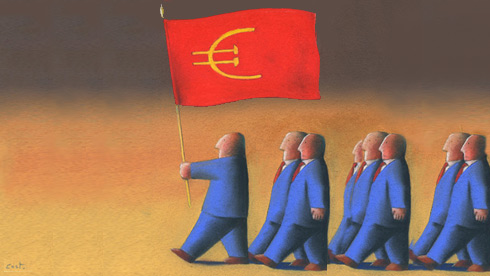 Populism is not the real issue

Referring to all the movements of rebellion that are springing up here and there as populist or reactionary only serves to hide the real roots of the problem. The EU, as we know it, is not threatened by the anger of its citizens, but by the reluctance of governments to delegate their sovereignty.

I hope for the birth of a federal Europe and for the maintenance of the single currency. If this does not happen, instead of the EU we will have a number of small states lacking greatness but not baseness, which are no longer allies of the United States but rather, are, more than ever, vassals of US power. We would be back to square one: vanquished by our nationalisms, as we were during the wars of the 20th century.

Why are a growing number of Europeans so discontented, so disgusted, and willing to join the ranks of the extreme right and the Eurosceptic parties? To call this trend populist or reactionary is just brushing the surface without discovering the root of the behaviour. Answering the question is meaningless if the protests and the proposals – which are all very different – are swept aside like a dust mote hampering some undefined progress.

Sweeping away the problem with disdain and denial is equal to ignoring that Europe, as it is today, oozes certain chronic poisons. It is not enough, as current governments do, to invoke it for it to actually exist. There is no hiding what is nonetheless clear: the summits and the elites of the union are afflicted by the vices of nationalism and conservatism.

Here again, we should examine the words that are used. The word "federalism" is no longer taboo – except in France. Touted by the left and the right, it is, however, not followed by concrete action such as pooling the public debt and spurring growth through eurobonds or by way of far-greater EU financial resources than are currently available. Nor are there measures aimed at giving new powers to the European Parliament based on a new, common Constitution, born of the will of the people. In short, a Europe that would be a refuge in these troubled times rather than a bastion protecting an inbred oligarchy of powerful people all covering-up for one another.

In a democracy, the people are sovereign

Europe as it stands is not threatened by the anger (either from the right or the left) of its citizenry. It is threatened by governments that are reluctant to delegate their national sovereignty which is not only a sham but also usurped since, in a democracy, the people are sovereign. If the 2007-2008 crisis torments Europe beyond measure, it is because of these distortions. Austerity that accentuates poverty and inequality, a Stability Pact discussed by no parliament; that is the Europe that wants to get rid of populism. It is the misery in Greece. It is government corruption that fuels inequality and sham stability.

The case of the radical left in Greece is exemplary. SYRIZA, a coalition of citizen movements and left-leaning groups, was called anti-European and populist during both the 2012 elections in May and in June. European governments were mobilised, describing SYRIZA as the monster to be slaughtered. Berlin even threatened to cut off its aid. But [[neither SYRIZA nor Alexis Tsipras, its leader, are anti-European. They are asking for a different Europe]] – and that is what the establishment dreads.

When Alexis Tsipras presented his programme to the Kreisky Forum in Vienna, he surprised those who had covered him in mud. He said that the framework of the euro and of the bailout plans had destroyed the EU instead of healing its wounds. He recalled that the 1929 crisis was first managed with a free-market approach — as is the case today. "Governments denied that the framework of their projects was absurd, insisting on austerity and calling only for a recovery through exports".

Putting the blame on hardworking citizens

The result was misery and the advent of fascism in southern Europe and of nazism in central and northern Europe," he said. This is the reason for which the Union must be revamped from A to Z. Taking up a proposal made by German trade unions, SYRIZA advocates a Marshall Plan for Europe, a true banking union, a public debt centrally managed by the European Central Bank and a massive EU public investment programme.

But Alexis Tsipras also denounces what no one else dares to point out: the link between the European crisis and the corrupt democracies in Athens and other southern countries. "Our kleptocracy has forged solid alliances with the European ruling elites," he said, and their deal is fuelled by the lies about the faults of the Greeks and the Italians, about wages that are too high and about states that are over-generous. These falsehoods "serve in effect to shift the blame for these national failures from the shoulders of the kleptocrats to those of the hardworking citizen," he added.

[[This alliance of elites meets with no opposition since the classical left also adopted, in the 1990s, the free-market dogma]]. A large part of the population thus finds itself without representation. They are missing, resigned and punished by austerity policies paced like a military exercise. It is this part – a majority, if those that abstain from voting are included – that is protesting against Europe.

Sometimes this group even calls for an unreal return to national currencies and sovereignty; sometimes it calls for another Europe which includes the poor, as was the case after World War II and in the 1970s. That is what Tsipras says. And in Italy, Beppe Grillo, in his somewhat chaotic speeches, says just about the same thing.
If nothing moves, Europe will no longer be a shelter but a building open to the elements. Administered by inbred elites, it resembles more and more the Dead Letter Office guarded by Bartleby, in Herman Melville's short story, Bartleby the Scrivener. After sorting and throwing away thousands upon thousands of letters sent but not delivered Bartleby decides to refuse all orders and requests with a dispassionate "I would prefer not to".