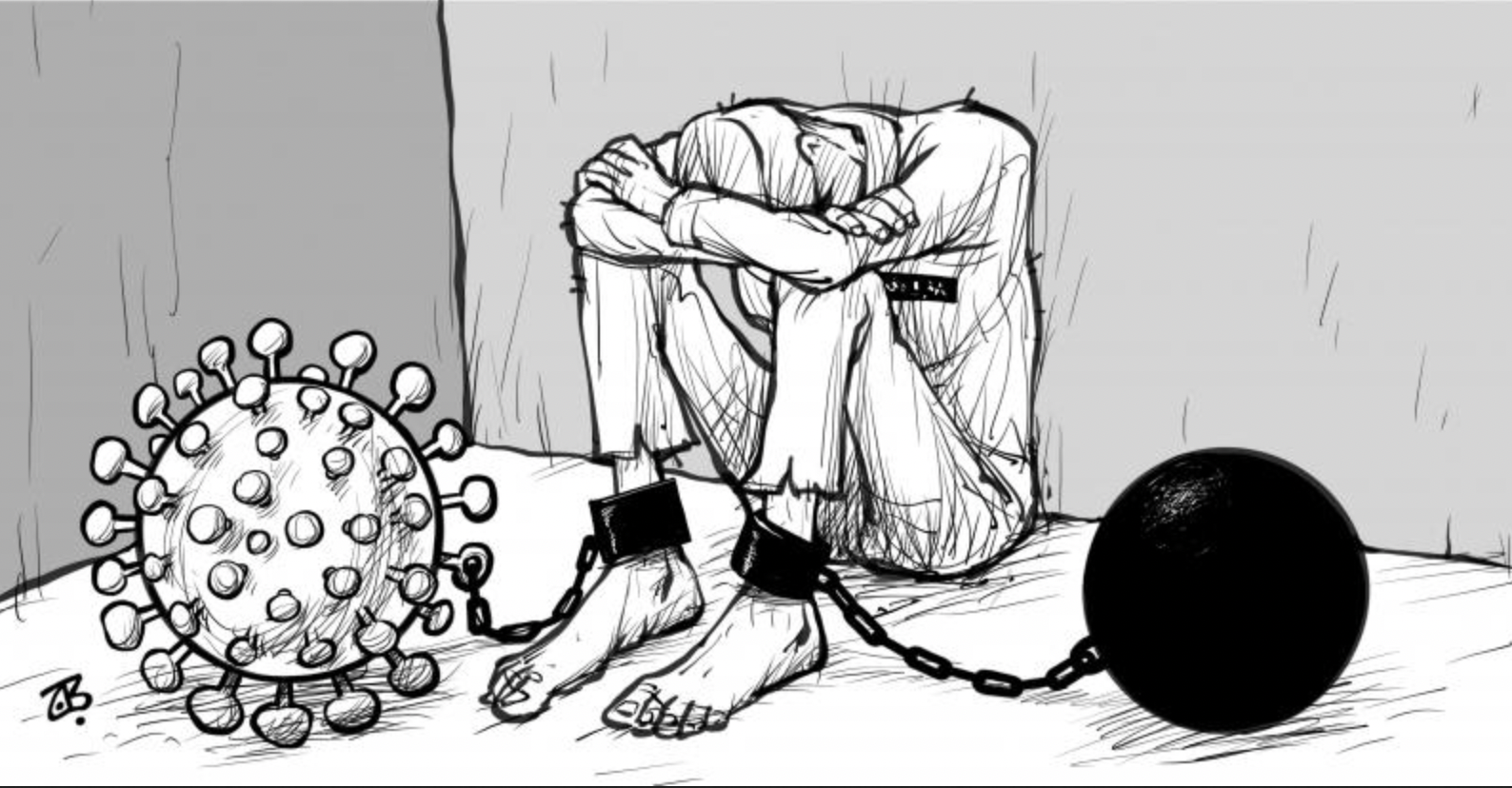 Prisons have managed to contain the pandemic, but at what price?

In many European countries, containing the spread of Covid-19 has come at the price of human rights. European prisoners have had to endure extended isolation, suspended visiting hours, and the cancellation of training and recreational activities. This is the second part of the European Data Journalism Network’s collaborative investigation, led by 12 media outlets, including Voxeurop, in nine different countries.

The Covid-19 pandemic has reminded us of the dangers of prolonged isolation and the spread of disease in closed places. While European prisons have not been entirely absent from the news during the pandemic – there were the March 2020 riots in Italy, for example, or the Belgian inmates who made thousands of masks – the management of the public health crisis within these institutions has rarely been the subject of in-depth analysis.

The pandemic quickly became part of the "everyday crisis" that constitutes life for Europe’s prisoners, and, just as rapidly, questions began to be asked about the anti-Covid measures being enacted within prisons. In order to shed light on the management of the pandemic from a European perspective, the European Data Journalism Network (EDJNet) collected statistical data from more than 30 European countries, for a collaborative survey involving 12 media outlets from 9 different countries.

While Europe’s incarceration rate has been falling for years, in January 2020 there were a total of 1,528,343 prisoners in 51 (out of 52) of the Council of Europe prison administrations. In the European Union, only ten of the 27 Member States had an above-average incarceration rate.

Cases inside increase with the number of cases outside

In the first part of the investigation, we discovered that the number of Covid-19 infections among detainees follows the overall trend in the general population. Some countries, such as Cyprus, France and Hungary, do not follow this rule, which strongly suggests that anti-Covid measures as well as vaccination inside prisons have averted catastrophe. However, most of these measures and their perceived consequences have been controversial: late implementation, limited effectiveness, questionable impact on human rights, among other things.

Despite the increased vulnerability of the prison population, they were not necessarily given privileged access to vaccines, as Dominique Simonnot, France’s Comptroller General of Places of Deprivation of Liberty (CGLPL), points out. "When the vaccination campaign began, we asked that staff and prisoners be vaccinated as a priority," Simonnot explains. The presence of a virus such as Covid-19 in an enclosed place like a prison can quickly deteriorate, "as was the case in Tours last spring," said Simonnot.

On 9 March 2021, an outbreak was detected in the prison in Tours, central France. 65 cases were identified among the detainees, the largest cluster ever recorded in the establishment. Eventually almost half of the prison population contracted Covid-19. Requests for priority vaccination of prisoners were not heeded in France, nor in some of its neighbours.

In 2021, the vaccination of inmates is still not complete, though it is progressing - in Spain, for example, where 86.14 percent of detainees have received their two doses, or Ireland (95 percent, one dose) and Hungary (79.47 percent, two doses). Yet the disparities across Europe are still huge: in Bulgaria, only around 14 percent of prisoners have received one dose of the vaccine.

In order to better control the pandemic and limit the number of cases, numerous restrictive measures have been enacted across Europe: suspension of family visits or activities, prohibition of physical contact, confinement, etc.

In order to compensate for these restrictions, detainees have usually been given some form of compensation: video-conferencing visits, early release or prison leave.

"In Belgium, there was almost no compensation," says Olivia Nederlandt, professor of criminal and prison law and member of the Belgian section of the International Prison Observatory (IPO), according to whom video-conference visits and telephone calls are not enough. "There were so many other options: free telephone usage, free internet - as in other countries. We could have provided canteen credits, doubled the amount of prison leave after the crisis, but almost nothing was done to compensate for restrictions placed on the fundamental rights of detainees for more than a year and a half.”

The successful control of the pandemic should not obscure the consequences of these restrictions, as the Irish Penal Reform Trust states: "Despite a relatively low number of confirmed Covid-19 cases in prison, the impact on day-to-day regimes has been harsh.” In Ireland - as elsewhere in the world - prisoners have suffered reduced family contact, lack of activity, limited access to training, work, sports, as well as long hours spent in cells. "While the measures adopted may have limited the number of infections, we cannot ignore the immense impact they have had on the lives of men and women in prison."

Prison overpopulation amplified by the pandemic

In early 2020, decisive action was necessary to control the spread of Covid-19. While many factors that increase the risk of infection for prisoners and staff have been raised by prison stakeholders, overcrowding comes top of the list. As Adriano Martufi, researcher and assistant professor of criminal law at Leiden University, confirms, "the main recommendation that was given during the pandemic by independent organisations and supranational bodies such as the European Committee for the Prevention of Torture (CPT) was, among others, to reduce the prison population.” For the most part, the various European prison administrations have reduced the population through prison leave, early release, or house arrest. In France, the prison population fell from 70,000 to less than 60,000 between January and June 2020 (thus falling below the overcrowding threshold), before rising again.

While France and most other European countries were initially able to reduce their prison populations, this trend did not continue throughout the pandemic. Some institutions quickly returned to pre-containment levels. In January 2020, 10 of the 38 countries covered by a study by the Council of Europe and the University of Lausanne had more prisoners than available places. These countries included Cyprus, Italy, Belgium, France and Hungary.

“The eternal problem is that the rights of prisoners are not seen as a priority, since there are no votes to be gained by making conditions inside prisons decent and humane.”

It is currently difficult to establish a clear link between overcrowding and the spread of the virus due to a lack of research on the subject. However, by making life more difficult in closed places (difficult or impossible to ensure effective isolation or quarantine, lack of access to care, medical equipment or vaccines), overcrowding clearly complicates any containment of the coronavirus in prison and the proper treatment of patients.

Even under normal circumstances, the living conditions of prisoners should be a cause for concern. In 2019, in some countries, nearly one percent of detainees died while in prison. In the same year, France had a miserable record: of all deaths in prison, 71 percent were suicides.

A lesson to be learned: the need for reform

While the Covid-19 pandemic was not the disaster it might have been in many European prisons, the multiple human rights violations, and the subsequent attention drawn to living conditions within their walls, highlighted for many the need to overhaul the prison system as such.

"One of the main ambitions of the United Nations Office on Drugs and Crime (UNODC) is to create emergency release procedures and promote greater institutionalisation of alternative sentencing," says Philipp Meissner, inter-regional adviser and focal point at UNODC. "Rather than returning to business as usual, we should take the health crisis as an opportunity to focus our attention on the immense potential of community-based measures for certain categories of offenders.” While - sometimes controversial - alternatives to incarceration exist the prison sentence is still the benchmark today.

"I think the eternal problem is that prisoners' rights are not seen as a priority, since there are no votes to be gained by making conditions inside prisons decent and humane, or by moving towards a more proportionate use of incarceration," says Catherine Heard, director of the World Prison Research Programme. "It's never a public priority. But I think we've learned with the pandemic that health in prisons impacts health on the outside."

In its worst moments, the pandemic has proved that the prison situation considered “normal” is in fact an incredibly delicate structure, vulnerable to the slightest gust of wind - a microcosm where any turbulence impacts the whole of society. If this situation fails to draw much sympathy today, it is highly likely to force itself into political and public consciousness in the future. In this regard, Covid-19 represents an ideal opportunity to urgently address a painful problem. 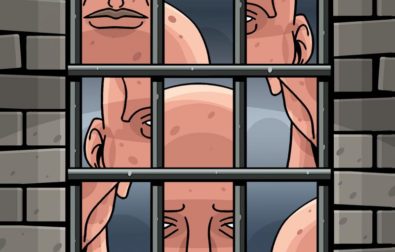 Convicted twice over: Europe’s prisons and the pandemic