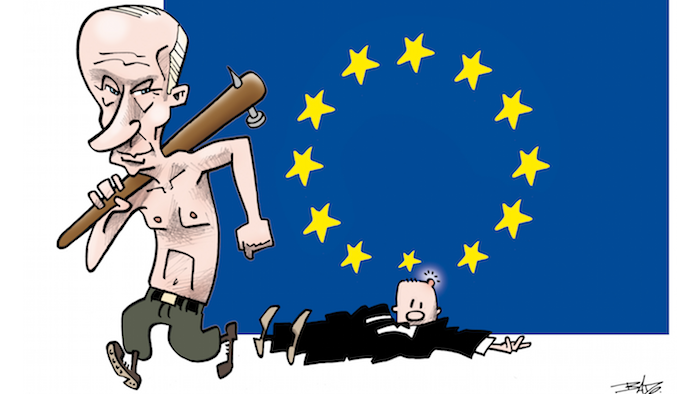 The refugee crisis has given the Kremlin an opportunity to implement a policy of confronting Europe, taking advantage of its current weaknesses and divisions, says a German columnist.

Richard Herzinger, a columnist at German daily Die Welt, argues that Vladimir Putin is making tentative steps to extend Russian power into Europe. The fall of Angela Merkel is at the top of the Russian president’s wish-list.

The Kremlin’s willingness to meddle in foreign affairs has only grown since the Ukraine crisis. Herzinger claims that a similar “infiltration strategy” is at work in Germany, where Russia now claims to be protecting German citizens of Russian origin. A fabricated story about a Russian-German girl raped by a gang of refugees was widely propagated by the Russian national media. Sergey Lavrov, Russia’s Foreign Minister, stepped in on behalf of the victim to criticise how the German justice system had handled the case. Herzinger argues these actions are part of Russia’s broader strategy to destabilise the European Union: “Moscow is constantly testing how far it can go without encountering significant opposition in the west.” Merkel’s rebuke to the intervention has had few repercussions. Nor has the decision of a British court to implicate Putin in the assassination of Alexander Litvinenko, a Russian dissident poisoned in London.

But what is driving Russia’s strategic interventions in Europe? Herzinger reckons that Putin aims to drive apart the EU’s member states and ultimately fragment the Union itself —

The top man in the Kremlin dreams of isolated European nation states, outside the sheltered realm of the EU, which can no longer make any fundamental geopolitical decisions without seeking the approval of Moscow, the new dominant power. For this to happen, the transatlantic axis must be broken and America must be driven off the continent. Putin’s ambition for a Russian dominated Europe is grounded on a neo-imperial mindset which lumps together the Tsarist idea of Russian superiority with a revived pride in the legacy of the Soviet Union’s military dominance.

Herzinger regards as naive analysts who are counting on economic sanctions to soften Russia’s stance and normalise its relationship with Europe. Russian society, he argues, has been primed to consider itself as playing a special role in world history. In this vision, Russia has the duty to save its western neighbours from the “liberal decadence” emanating from the United States. Putin plays a central role as the rescuer and renewer of “Russianness”. This carefully crafted position grants him a good deal of protection from economic shocks.

And Putin’s geopolitical adventures do not stop at Europe. Syria has provided a perfect example of how a well-planned Russian intervention has confounded and outmanoeuvred the west. While diplomats try to paper over their differences by pointing to ISIS as their common enemy, Putin continues to support Assad’s onslaught on his own people. Terrorism serves as a convenient excuse for inaction in Europe’s eastern frontier as well —

The western fiction that the Kremlin is an unavoidable partner in the war against terror has justified further appeasing Russian aggression in Ukraine, putting the country under pressure. Western governments have not labelled Russia’s actions in Ukraine as aggressive, despite its open infringement of the Minsk agreement and its continued hybrid war in eastern Ukraine. Instead, the US is now directly negotiating with Moscow to come to a modus vivendi regarding the issue. But even if the enormous costs of Putin’s war on two fronts – in Syria and Ukraine – meant he was prepared to make concessions, it would be foolish in the extreme to believe he would give up his claims on neighbouring countries. There are certainly no fundamental obstacles preventing an agreement with the Kremlin. But it must be based on the west’s common desire to set clear limits on Putin’s hegemonic ambitions. But the west’s faltering democracies seem further away from this than ever.