Opinion Debates Digital | Russia
Pictures of Covid-19 victims on a fence in front of the Department of health in Saint-Petersburg, May 2020. 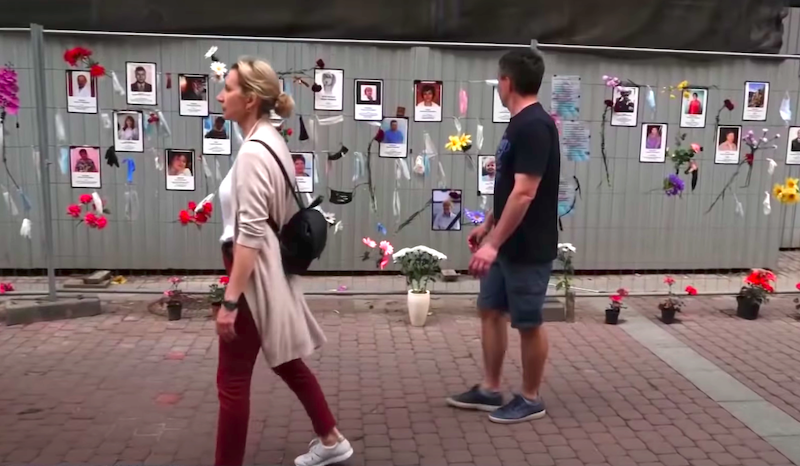 Russians have been living in a regimen of political self-isolation for a long time, writes Sergei Lebedev. He sees how the coronavirus connects today's fundamental lack of trust with the crimes of the Soviet past. But will the Covid-19 crisis really have an impact on Putin's rating and image?

Sky News  | Pictures of Covid-19 victims on a fence in front of the Department of health in Saint-Petersburg, May 2020.

When the first Covid-19 patients appeared in Russia and the virus began to spread, I was working in the Central Archive of the Federal Security Service (FSB). It holds documents of people repressed, arrested, and executed in the Stalin period.

Every morning I came to the inconspicuous building not far from Lubyanka, on Kuznetsky Most street, and was handed crumbling cardboard folders: the archive case files of my relatives and family friends.

I existed in two different times.

In one, the real time, there were world news about quarantines, closing borders, the new body etiquette: a ban on gatherings, masks, social distancing; in other words, the cessation or extreme reduction of contacts.

In the other time, the past, as I read the pages in the files, I saw something strangely and terribly similar.

I saw how a person called an enemy of the people instantly became contagious. His family, friends, and co-workers instantly ended up in the risk group. I observed through the interrogations transcripts and arrest warrants how this stigma, this deadly label passed from brother to brother, from father to children, among members of a philately club, among priests in a single town.

The virus, or more precisely the state of infection, was a physiological metaphor for political repression and its effects passed down generations: the withering and impoverishment of life, the destruction of public and human solidarity, the origin of the habit of viewing any contact as dangerous and any person as potentially contagious.

You cannot hide from history

I think that this phenomenon had (and still has) an opposite, paradoxical side in Russia: an unspoken fatalistic consensus that life is not an unconditional value, that you cannot hide from history and the state and you cannot resist them, they have to be accepted as a natural catastrophe that has become part of daily life, like the epidemic.

With this anamnesis, Russian society met the new coronavirus.

The actions of the state were and still are predictable.

A "national vote" was set for April 22 on amendments to the Constitution that would allow Vladimir Putin to be elected president two more times (according to the present Constitution, this is Putin's last term) and represent yet another authoritarian and conservative turn in Russian politics: for example, one amendment says that a marriage is exclusively defined as "the union of a man and a woman."

As long as there was the probability that the election and the Victory Day parade on May 9 could take place, the authorities diligently pretended that the coronavirus would not reach Russia, that it wasn't so dangerous – one of the versions offered was that people born in the USSR and given the mandatory BCG vaccination against tuberculosis as children would not get Covid-19, that is, the Soviet past protects the Russian present.

But as soon as the data on infections reached threatening levels (even given that medical statistics, like all others, are obviously manipulated in Russia), the approach switched to the very opposite: severe quarantine, digital passes, apps in smartphones that tracked movement. These measures may be reasonable or partially reasonable, but when they are used by an authoritarian state in which citizens are not potential patients but potential suspects, when the top priority is discipline and not health, the effect is overwhelming. I think little did more to spread the virus in Moscow than the huge lines at metro entrances on the first day of electronic passes: the police were ordered to check every pass.

It is noteworthy that the public's behavior in this situation revealed several critical deficits interrelated in a complicated way, which are acutely contradictory and which essentially make Vladimir Putin's regime possible.

The first is the trust deficit; yes, toward the authorities, too, but primarily toward other citizens: here everyone saves himself or herself alone.

There is also a deficit of recognizing the other, of recognizing boundaries; a deficit of the respect that comes with understanding the value of other people's lives: it is no surprise that the quarantine is perceived in Russia primarily not as a coordinated action of responsible citizens but as an imposed state measure that must be obeyed.

At the intersection of these two deficits exists a third: the deficit of civic responsibility.

The quarantine and social distancing merely show that we have been living in a regimen of political self-isolation for a long time; this is our reality, and it's only now that it has become both metaphorically and physically visible.

Empty streets and alienation from politics – we lived this way long before Covid-19.

Many people in Russia are saying that the Covid-19 pandemic will have a serious impact on Putin's rating and image. But it is important to remember that Putin knows how to gain strategic benefits from tactically terrible and hopeless situations. The hostage taking of a school in Beslan in 2004, which led to storming of the school and the death of hundreds of children, should have been the end of his career. Instead, using the excuse of fighting terrorism to strengthen power, Russia no longer has gubernatorial elections. I believe that we will soon see how the epidemic and its destructive consequences on national health and the economy will be used to justify yet another reduction of civil rights.

This article is part of the Debates Digital project, a series of digitally published content including texts and live discussions by some of the outstanding writers, scholars and public intellectuals who are part of the Debates on Europe network. An online discussion with the authors will take place on 23 June at 7 PM CEST, and will be streamed on YouTube.