Ideas Climate change and the media 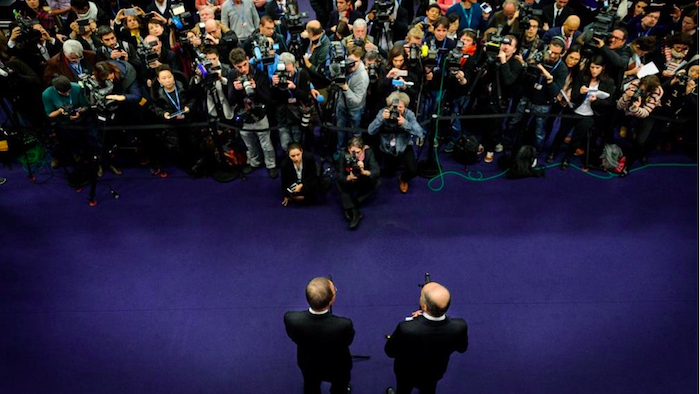 Ideas Climate change and the media

Read all about it!

A year after the signature of the Paris' climate agreement, and with implementation discussions currently underway in Marrakech, the media coverage of climate change issues is not up to scratch, says one of the actors of COP21.

If we want to truly understand the stakes COP22, we have to start with Decision 17 of the Paris Agreement, which was unanimously adopted on 12 December 2015 by 195 countries. It shows us the scale of the effort states will have to undertake in order to meet their national contributions to tackling climate change. The text says that their different contributions are currently not “compatible with the scenarios [...] that predict a temperature rise of two degrees.” We now face a colossal task. If all states make good on all their climate pledges between 2020 (when the agreement enters into action) and 2030, we will be emitting 55 gigatonnes of greenhouse gases (GHGs) in 2030.

But by this date, emission levels should be around 40 gigatonnes if we are to keep temperature rises beneath two degrees – an overshoot of 15 billion tonnes of GHGs. And this assumes all states fully respect their Paris commitments. To put it bluntly, COP21 has relaunched international action and is a huge step forward after Kyoto’s failings and the weak results from Copenhagen. But the hard work has only just begun. How should we report it?

I’ve only very rarely seen Decision 17 mentioned in the media, even though hundreds of articles discuss climate change. To cite just three recent examples, we’ve had The New York Times writing last year on California’s drought. This summer Le Monde published a worrying report on droughts and desertification in Iran. And third, Elizabeth Kolbert’s ever captivating reportage in The New Yorker on the acceleration of glacier melt in Greenland.

These regional illustrations are vital, but we have to consider climate change at a planetary level. If not, we would miss its essential feature, which is in the way different factors interact. During COP21, we organised a hangout between Valérie Masson-Delmotte, now Co-president of Group I of the IPCC, and assembled environment editors from the international media.

After the discussion, Valérie told me about the scientific data that feature in the IPCC’s Fifth Report (2013, Group I) concerning the life-span of CO2 in the atmosphere. “It is not 100 years, as is often repeated, but 1000 years”, she told me. I thought I must have misheard her! But that is indeed what this infographic published on the site Only Zero Carbon shows. 20% of CO2 emitted into the atmosphere will still be there in 1000 years! We are now causing irreparable damage. We have all the tools we need, but to speed up our awareness raising efforts, we must repeat them again and again.

While climate change is the mother of all problems, its treatment by the press is nevertheless pretty typical. A study carried out by Media Matters, published in March 2016, examines the big US news networks: “How Broadcast Networks Covered Climate Change in 2015”. It presents the general themes covered by the media: extreme weather, plant and animal life, the economy, public health, national security, and other events.

All the subjects that received a good amount of coverage were related to institutions: COP21, Pope Francis’ Encyclical Laudato si’, the Obama administration’s plans to reduce GHGs, his veto on the Keystone oil pipeline… The media massively follows a subject when leaders get involved or when a report is published. NGOs have understood this well, multiplying their reports on climate change, fossil fuels, animal extinctions etc. And they are often behind those subjects that receive coverage.

Some weeks ago, WWF’s Living Planet Report on vertebrate populations – fish, birds, mammals and reptiles – which have fallen by 58% between 1970 and 2012, was picked up by media outlets around the world, from the USA to India.

Paradoxically, while the big political moments are covered, it is much rarer to see work done on the documents published by public administrations. The media has largely neglected the inventory on the online platform NAZCA uploaded by the UN, which details the 11,000 commitments made until now by over 2,300 towns, 2,290 business and 448 investors to combat climate change. And yet this was a new innovation coming out of Paris.

More essential yet is that the Paris Agreement relies on freely volunteered efforts by states to reduce their GHG emissions, through the famous Nationally Determined Contributions, or NDCs. It represents the “potluck” of climate negotiation strategies: each party contributes according to its disposition and its means, without any obligation. Organisers hope the shame for parties coming empty-handed will motivate everyone to bring along enough. Their commitments, varying widely by country, are presented as national strategies with numerical targets. News articles detailing each contribution very rarely refer to their original documents.

But they are easy enough to find on a site the UNFCCC created for the occasion. We ought to study them and question environment ministers on how their climate policies are progressing. Following up on these national contributions is extremely important because they sketch out the energy policies of every country, with implicit economic questions. But who is making the effort to do so?

Future COPs, including the current in Marrakech, must work out how to harmonise the presentations of the NDCs, how to improve their transparency and ratchet up their ambition. What makes this exercise difficult is again the issue’s planetary dimension. It is far simpler to cover the adoption of a law or a UN General Assembly that to simultaneously follow 195 national policies on climate change. No media outlet or group seems prepared for this titanic, yet vital, undertaking.

At a minimum, it would be possible to focus our efforts on the most strategic countries. Five actors represent more than 60% of global emissions: China (24%), the US (15.5), the EU (11%), India (6.5%), Russia (5%). Countries like Indonesia or Brazil, which hold some of the world’s largest forests, are also important to follow. And it is also up to national outlets to compare themselves to other countries to see whether their ambition is high enough.

A country’s international image on its climate change policies will become one of the essential tools for international action: is anyone prepared to accept causing a climate disaster for not committing enough to tackle climate change? That will weigh on how the country is perceived and above all on its economic interests.

The IPCC is another expert public space worth paying close attention to. The media generally tends to cover its usual reports, but it is now preparing a special report for publication. Decision 21 of the Paris Agreement states that the IPCC “will present a special report in 2018 on the consequences of global warming 1.5ºC above pre-industrial levels.” This point is very important. Because in 2018, the next big climate meeting, it is highly likely that the IPCC will affirm it is practically impossible to limit climate change below 1.5ºC until 2100, which would signal the disappearance of archipelagoes like Kiribati,

Tuvalu and even the Marshall Islands. The Paris Agreement kept in its hotly contested Article 2 the aim of “limiting temperature rise to 1.5ºC.” But if in 2018 the IPCC announces that this aim is unfeasible, everything will change. For the first time, we know for certain that parts of the earth are doomed to disappear in the short term because of man-made interference on the climate.

The IPCC would start a debate on a topic that has so far been held internally: the question of geo-engineering. We could try chemically altering the climate to limit the warming of the atmosphere. In comparison, debates on GM crops would look paltry.

But beyond the need to follow the details of how big public actors and organisation behave, we must ask a more fundamental question regarding climate change. In the conversations with journalists I had during COP21, I understood just to what extent we haven’t mastered the basics: just what is climate change? What is the problem? How can we reduce our carbon footprint both as countries and as individuals? I became aware of the phenomenon through books like Storms of my Grandchildren by James Hansen (2009), Requiem for a species by Clive Hamilton (2010) and the graphic novel Saison Brune by Philippe Squazoni (2012). All are works allowing for a global approach to climate change.

On screen, Al Gore’s An Inconvenient Truth (2006) has become an accessible, international and educational account of climate change. Recently in France, it is the film Demain (2015) by Cyril Dion and Mélanie Laurent which saw a million cinema viewers by appealing to a journalism examining solutions. And more recently yet, one of the most interesting moments of Leonardo DiCaprio’s documentary Before the flood, aired on National Geographic (10 million YouTube hits in one week), is the passage on agriculture where he explains how much space animal rearing takes up. If 47% of the US is given over to food production, 70% of that is used to feed cows, when only 1% is used for fruit and vegetables for human consumption!

Traditional media has yet to square up to the question of covering climate change. How can short accounts tell the story of changes stretching over whole epochs? It leads me to think the media must perhaps invent a new way of addressing a problem, which we know will still be around in 10 years in more or less the same terms.

For COP21, The Guardian and the Global Editors Network created the Climate Publishers Network, whose aim was to share documents [which VoxEurop translated], videos and infographics made accessible for all. Creating a basis of shared content for a number of outlets is indispensable given the planetary nature of the subject. But it is beyond the reach of any single media organisation. This basic collection of content should allow people to access essential data, referencing investigations on key subjects like agriculture, the transition to a low carbon economy, the global battle for battery technology… Let’s take an example: Turkey wants to open 80 new coal-fired power stations in the coming years. Covering a subject like this could be shared between a number of outlets, as it was with the Panama Papers. When will we have the Climate Change Papers?

Another option is to go down the route of The Guardian: openly take sides in a campaign – in this case “Keep it in the ground”. With this campaign, The Guardian behaved more like an NGO. Another notable action by the British newspaper was through its editorial engagement in Australia, which without a doubt contributed to the surprise election of the Labour Party in Queensland in February 2015. This was the party which opposed the development of coal mines, heavily defended by the then Liberal Prime Minister Campbell Newman. While a coalition of NGOs (WWF, Greenpeace, 305.org…) had also taken up the fight, the radical choice made by Guardian Australia was more unexpected and proved its effectiveness.

All of our actions today will shape the climate of tomorrow. Climate change is radically questioning how the media should cover the unprecedented event known as the anthropocene.

To conclude, here are my six pieces of advice for the international media: