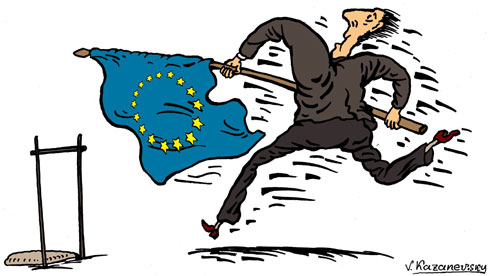 Rebirth of Europe is possible

In setting aside what was best about Europe, its humanism and extraordinary altruism, Europeans have forsaken the defining qualities of their continent. If Europe is not to vanish from the world stage, a French economist argues that a return to these values is a necessity.

A smaller Europe in a global world is a self-evident historical fact. Yes, Europe along with the West has grown smaller in a more global world. But it still remains immense. If we are willing to acknowledge that the following figures are not propaganda statistics, in 2013, Europe is: a population of 500 million, 4.5 million square kilometres, a GDP of $18trn (€13trn), which is greater than the GDP of the United States and three times the GDP of China. And this is backed by financial savings of €12trn that are available for the Eurozone.

Could it be that Europe, like Gulliver, is simply tied down by the mediocre Lilliputians which are its selfish member states and the competition of national interests that prevent the emergence of a united Europe? Is it being manipulated by the sum of individual financial and industrial interests that have trapped it in a complex web of well-organised lobbies?

The list of Lilliputians that have trapped the Gulliver of Europe is a long one. And it is one to which we should also add the “scapegoats” that Europe throughout its history has always conjured up to absolve itself from its own failures and weaknesses. And what if this stunted, powerless and failing Europe was the victim of a grand plot?

“We are all responsible for to all, and myself more than all the others,” said Ivan Karamazov. In arguing that the European hell created by the Lilliputians that have trapped the Gulliver of Europe is the responsibility of others, [[we have found an excellent way of exonerating the citizens, the opinions and the peoples of Europe from any share in the blame]] for its malformation.

I support a radically different idea. If Europe, in spite — or because — of its immense financial wealth and its abundance of material and immaterial goods, is disappearing from the world stage, it is the responsibility of Europeans themselves, and in particular the generations of today who are in power: the spoiled children of the post-war period, who have never known anything other than peace, prosperity and the selfish pursuit of their individual happiness.

Without devoting the bare minimum to ensure their integrity and sovereignty in strategically important fields, they prefer to finance their petit-bourgeois comfort and reject the defining qualities of the European spirit and what was best about Europe: its authentic humanism, and extraordinary altruism.

We could simply come to halt with this conclusion: with a Europe that has no plans or identity, which is simply fulfilling expectations of others for a market, a space that is to be peopled, and a horn of plenty and well-being that can be visited and also pillaged.

It is a point of view that I do not share. First and foremost, because [[history has shown that in times of regression Europe represents a fatal threat both to itself and to others]].

Next, for those who believe that “economic growth can atone for every sin,” it is difficult to see how, for example, China could do well if the European Union disappeared or slid back into recession. Finally, how can we imagine that the gigantic destruction of human capital represented by the inactivity of one in every three young people in Europe could fail to result in conflict and violence?

Put another way: the rebirth of Europe is not a pleasant option, but a necessity for Europeans themselves and for the rest of the world. And the rebirth of Europe is not only a necessity, but it is also a possibility. It will be the work of at least a generation, but, just as old nations never die, it is not reasonable to expect Europe to disappear. “It is a miracle to be alive in a world of the dead.”

How should we identify the possible avenues for such a rebirth? Will a major Franco-German initiative be required? A new “ECSC”, or a large scale project, in the field of the environment, for example, which can be shared by a number of generations in different European countries?

Or will a more radical course of action be necessary, a “European revolution” on the lines of the American revolution, preceded by the affirmation, “We the People”?