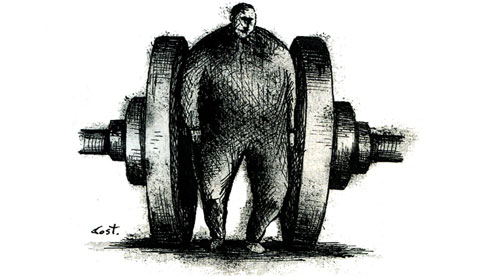 Reducing wages is not a panacea

In order to kickstart growth, Madrid has only to do what Ireland and Latvia have done: cut wages. The suggestion has caused an uproar in Spain. And, where the idea has been put into practise, it has left negative results to go with the positive ones.

There is hope. That’s the idea that the European Commissioner for Economic Affairs wanted to launch last Tuesday. Olli Rehn chose an unusual medium, his blog, to spread a message of high political tension: Spain has no reason to resign itself to abysmal rates of unemployment and anemic growth. If it wants to climb out of the hole, though, it must make mighty efforts – as mighty, for example, as having workers accept a general cut in wages of 10 per cent. To make his case, Rehn showcases for Spain what he calls “two success stories”, Ireland and Latvia.

As the focus broadens out from these two countries, however, the “success” Rehn is talking about does not appear so clear. [[The tough medicine swallowed in both countries has left their populations on the brink of poverty]]. In Latvia, it’s at 40 per cent, the second highest percentage in the EU. Domestic demand has collapsed, as well. In return, the small Baltic Republic has one of Europe’s fastest-growing economies. Ireland, on the other hand, following a tough recession and a slight recovery, remains mired in recession.

“If three consecutive quarters of declines in GDP are a success, what would a failure be by Rehn’s standards?”, asks Kevin O’Rourke, Professor of Economic History at the University of Oxford. Furthermore, O’Rourke denies Rehn’s main claim: in Ireland, there have been significant falls neither in wages nor in austerity prescriptions. Data from the official statistics agency give him the reason: the average cost per hour has remained stable since the beginning of the crisis. “The only country in the eurozone that has suffered a sharp fall in nominal wages is Greece. If it were to confirm the effects on its economy and social fabric, it would have to start thinking about another strategy.”

Dublin has become the good pupil of Brussels – unlike the rebel Athens – since it managed to tame its public accounts after 2010, when the massive injection of public money into banks shot the deficit above 30 per cent.

The European Commission is also pleased that unemployment, which rose in 2012, has started to fall steadily. Despite these improvements, and after several years of hewing to the recommendations of the IMF, the Commission and the German government, Ireland remains in recession. And, as Séan Healy, director of the Social Justice think tank claimed this week in the Irish Examiner, the austerity policy “has produced the single biggest transfer of resources from low and middle-income people to the rich and powerful in history. [[The main beneficiaries of this transfer have been parts of the corporate sector (mostly multinationals) and wealthy individuals]].”

The other model proposed by Rehn did indeed manage to find a way out of the extremely deep recession that hit in 2009. Latvia was the EU country whose economy grew most strongly last year, and it is expected to repeat the record in 2013.

The unemployment rate remains high (nearly 15 per cent in 2012), but the official forecasts say it will begin to go down. The success of its model has allowed the Baltic country to join the euro club next 1 January, despite the opposition from most of its population, who are fearful that giving up the country’s currency, the lats, will trigger price increases.

Here’s where the good news ends. The official doctrine, it turns out, prefers to tiptoe past the high price that the Latvians have paid. The Riga government sacked a third of its civil servants, and those who stayed had to accept salary slashes of up to 40 per cent. Social benefits were cut, and taxes went up. The loss of purchasing power of all the citizens, not just public servants, became evident as domestic demand plunged more than 27 per cent in 2009.

The modest dip in unemployment is also explained by the throngs of Latvians who have left the country in recent years. From 2000 to 2011, the population fell by 13 per cent, and Latvia now has little more than two million citizens, the same figure as in the 1950s. Surprisingly, the Latvians have reacted not with strikes and street protests in the Greek style, but with resignation. They even re-elected the government that swung the axe.

“The reforms have come at a high cost,” sums up Martins Kazaks, chief economist of Swedbank. “[[They have increased inequalities between regions and between social classes]].”

Aside from the success or failure of the prescriptions applied in Riga or Dublin, Commissioner Rehn’s comments have also raised doubts about the ability to export the model from a country of two million people like Latvia to Spain, with its 46 million people and fourth largest economy in the eurozone. Sources inside the community explain that Rehn wanted only to encourage debate on the situation in Spain, so “dramatic for millions of unemployed Spaniards”, and that in no case did he intend to transfer policies automatically from one country to another.

These explanations, though, have not stemmed the outrage that Rehn’s words have stoked among trade unionists, political parties, and countless citizens. Emilio Ontiveros, president of Analistas Financieros, points out several factors that prevent Brussels’ measures from being applied to Spain: the level of private debt, the drop in disposable family income that has taken place.

Rehn wrote in his blog that those who automatically reject his proposals “are taking onto their shoulders an enormous responsibility for the social and human costs” of having six million unemployed. If he is correct, the blame will be spread very widely indeed.