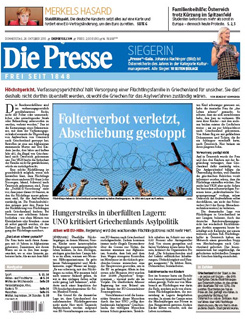 “Breach of torture ban stops deportation,” headlines Die Presse, in the wake of a decision by the Austrian Constitutional Court, which rules that a family of Afghan refugees should not be returned to Greece. The crux of the matter is the collapse of Greece’s system for processing asylum seekers, which now means that it can no longer be considered “a safe country.” Der Standard remarks that this is the first ruling of its kind in Austria, but similar decisions have already been endorsed by courts in other European countries.

“The United Kingdom does it. So does the Netherlands, and so too do Belgium, Norway and Denmark. Following a decision by the European Court of Human Rights, all five of these European Council countries are refusing to comply with the Dublin II regulation, which stipulates that asylum seekers have to wait for their asylum applications to be processed in the country where they enter the EU,” notes the Viennese daily.

According to a UN human rights expert, the asylum system in Greece has been overwhelmed to the point where refugees of all ages are likely to spend six months behind bars. Conditions in the detention camps are degrading and represent a potentially fatal risk to health, and the backlog of cases in the judicial system has meant that asylum seekers must wait for months to have their claims heard.

“The asylum crisis in Greece has become a painful problem for the EU,” points out Der Standard, because the EU27 will now have to find a solution to “humanise” the Dublin II system. On 28 October, the German Constitutional Court is to begin deliberations on the issue of whether Berlin has the right to automatically expel refugees to other EU countries without allowing them a hearing. Since 2009, the Karlsruhe court has ruled against 13 deportations to Greece, and the country’s appeal courts have also found in favour of refugees in more than 300 other cases. The Constitutional Court’s decision is expected in 2011.