Ideas Eric Jozsef on Europe in 2020 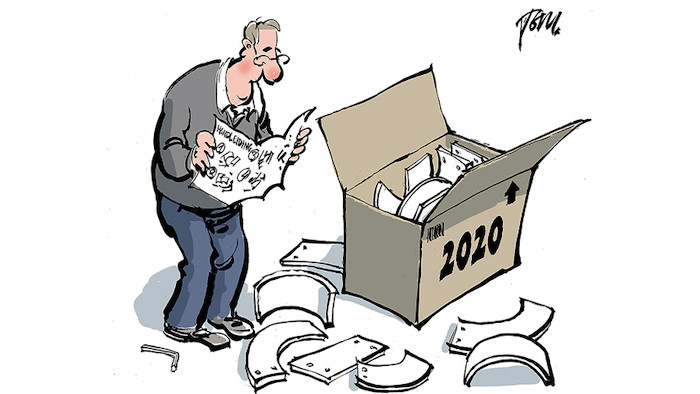 Ideas Eric Jozsef on Europe in 2020

For the co-founder of EuropaNow! and member of VoxEurop's supervisory board, the Conference on the Future of Europe taking place this year may be the last chance for the European Union to make the leap towards a fully democratic European federation.

“Will Europe hold out, and avoid disintegrating?” It was with this question, asked by a Palestinian friend from Gaza visiting Rome, that the new year began. Without a doubt, EU citizens have failed to take stock of the radical change that Brexit signals for the destiny of the continent and its standing in the eyes of the world. For the first time, Europe has made it clear that integration can be reversed. For all intents and purposes, the EU will begin 2020 with 27 members, thanks in no small part to Europeans failing to answer the call of history and demonstrate that a European people actually exists, that Brexit is not Britain’s problem, but an issue for the entire European community.

There was no show of solidarity, no joint mobilisation with British Remainers (now the majority, especially among young Britons) to express their commitment to defending, preserving and also advancing the European project. For my friend, a Palestinian intellectual, in Gaza “Europe represents life, democracy, culture”: in short, a model, an anchor point for the hopes of millions around the world.

As deadly shadows darken the middle-east, and climate change wreaks havoc in Australia, as Asia falls prey, with rare exceptions, to nationalist or totalitarian regimes, 2020 opens with a stinging defeat for Europe, with governments hastily consoling themselves that Brexit hadn’t caused an immediate cascade of further departures — or that, months earlier, extremist parties hadn’t emerged victorious from the elections.

There’s no doubt that the future will play out in Washington this year. The reelection of Donald Trump who — along with Vladimir Putin and Xi Jinping — works tirelessly for the breakup of the EU, could revitalise Europe’s nationalist parties, and fuel centrifugal tendencies across the continent. The kinds of compromises which have characterised the EU since 1957 are at risk of being made impossible. As Jacques Delors used to say, “Europe is like a bicycle, if it doesn’t move forward it falls”. Such progress has become more difficult, because now it involves radical choices that can be classified as existential.

The last decade’s economic and sovereign debt crisis has led to the creation of new EU instruments. However, as it stands, these are still too fragile to withstand a new financial crisis. Neither US disengagement (even before Trump had risen to power), nor Russian provocation, nor even Brexit, have produced the necessary jolt to make Europe adapt itself to the new planetary situation, and protect itself from current geopolitical, economic, migratory and climatic challenges.

In this context, the Conference on the Future of Europe, which is set to begin this year and last for two years, is both essential and laughable. Essential, because an absence of all effort to restore momentum would be suicidal. Laughable, because what the EU is lacking are not the kinds of orientations and recommendations that might emerge from such a conference, but rather the political courage, on the part of national leaders, to promote what many of them now know to be the only solution: a genuine European federation which could find its institutional form in the constitution of a European Federal Republic.

For the time being, the German and French governments have limited discussion of the conference to the question of appointing leaders. The most optimistic pro-Europeans are hoping that the assembly will at least lead to allowing the rule of simple majority for decisions made by the EU Council. This would be an undeniably major step forward, but it would also present a serious danger: with the Council’s perceived lack of democratic legitimacy, populations unhappy with decisions imposed by majority may end up harbouring bitter resentment towards “Brussels”.

There will be no future in Europe without a federal government and parliament given full legitimacy through the democratic vote of European citizens. More than ever, it is up to European civil society to make its voice heard in public spaces and by political representatives, so that we don’t have to settle for unsatisfactory and ineffective cut-rate compromises.

The future of Europe will be decided by how the event which marks Europe’s entrance into the 2020s is understood. Brexit arose from a simple proposition, crudely echoed by Boris Johnson’s “Take Back Control”. By cutting ties with Brussels at any cost, the British prime minister has managed to sell the illusion that European nation states, in a globalised world, still possess the instruments of power and the capacity for action. Only by empowering the European public can the EU avoid casting citizens into despair, from Paris to Rome, from Berlin to Bucharest, and even as far as Gaza.