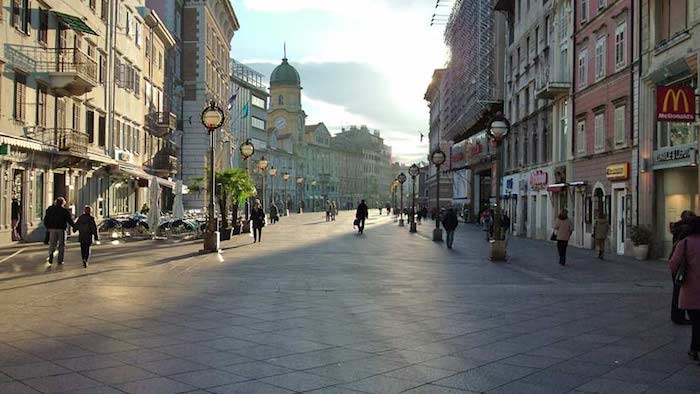 Rijeka and the two languages of Fiume

With the approach of 2020, when the main seaport of the Kvarner gulf becomes the “European capital of culture”, the question of bilingualism has reemerged.

65 years after its sudden abolition in 1953, bilingualism could make a new appearance in Rijeka, or Fiume, as it is called by Italian speakers. The municipality of Rijeka is currently considering the reintroduction of Italian on public signage, in preparation, above all, for 2020, when the city becomes the “European capital of culture”. The initiative, proposed by the party List for Rijeka (Lista za Rijeku), has yet to convince all of the local political forces, and also seems to be dividing the Italian community, who are undecided on what kind of bilingual signage should be introduced. For the mayor, Vojko Obersnel, the issue “is not a necessity for the city”, but the municipality has nevertheless declared itself ready to table negotiations for finding “a cultural solution to the question of the historic names of Rijeka’s streets and public squares”. What compromise, then, would ensure that the new signs represent the cultural wealth of the city rather than a reminder of old grievances?

“It’s about righting a wrong which has been done to the city”, explains Laura Marchig of List for Rijeka, originator of the initiative. “We need to remember that the city was called Fiume for centuries, and that in the 1700s Italian replaced Latin as the official language. I say this to counter the idea that the italianness of the city only corresponds to the fascist period, when, on the contrary, it’s a much longer and deeply rooted history”. The wrong that Marchig refers to happened in 1953, when “in one night all the bilingual signs were removed in Fiume, Cherso, Lussino, etc.” This event, occurring at the end of negotiations between Italy and Yugoslavia concerning territorial boundaries, put an end to visible bilingualism in the city, and may finally - according to the List for Rijeka representative - find at least partial redress.

Various solutions are under consideration in response to the autonomist party’s request. One option is formal bilingualism, or the provision of Italian translations on all signs in the city. This would include the use of “via” and “piazza” alongside “ulica” and “trg”, and the use of “Fiume” alongside “Rijeka”. This option would also necessitate the modification of official documents at every level whenever the city is mentioned (as currently happens for Pula/Pola, Rovinj/Rovigno and other cities on the Istria). A second possibility, advanced by the mayor, Obersnel, is “a cultural approach” to the question. The council would link each contemporary toponym with that of the past, illustrating how often the name has changed over the course of history. “Instead of writing ‘piazza Ivan Kober’ under ‘trg Ivan Kober’, it’s more interesting to write ‘formerly piazza delle erbe’”, Obersnel argues.

“But one option doesn’t exclude the other!”, insists Laura Marchig, when asked which option would be preferable. “I’ve requested that members of the Italian community avoid obstructing progress, otherwise nothing will ever change”, she adds. “The mayor only insists on place-names, while we support actual bilingualism, not least because at the moment the city is in violation of the law, since the Italo-Croatian treaty of 1996 stipulates that bilingualism be introduced in every locality with a native Italian minority”. In a more conciliating tone, Furio Radin (member of the Croatian parliament representing the Italian minority) argues that “we shouldn’t split hairs. It’s true that the treaty of 1996 - article 3 - stipulates a gradual extension of rights and bilingualism, and the council of Fiume, in view of 2020, would do well to apply the treaty, but I think it would be advisable to depoliticise the matter”. Nonetheless, Radin claims to have “high hopes” with regard to the mayor.

For Radin, if it is true that “bilingualism can only be a good thing for a city”, it is also true that “if political will is lacking, we can still approach the question from a cultural point of view”. Similar to the mayor’s view, then, Furio Radin thinks that “if they can put German signage in Zagreb, they can put Italian signage in Rijeka’s old city”.

While waiting for the municipality to settle the issue, the Italian community has established a committee charged with studying the case and submitting a proposal which is as scientific as possible. The historian Ivan Jeličić is one of the members who will be officially nominated at the end of February. For Jeličić, Rejika’s appointment in 2020 is, in effect, “one of the last opportunities to do something about bilingualism, and thus to provide the municipality with a viable project”. Nevertheless, Jeličić understands the difficulties which are making progress so slow.

“It’s the whole question of Rijeka’s identity”, explains Jeličić. “What does this city represent? Until the fall of Yugoslavia, Rijeka was one of the defining locations of Yugoslavismo, built on the fight against fascism. But with the fall of socialist ideology, there’s a search for a different definition. Reintroducing the old names, from the Austro-Hungarian period for example - in reality, even that identity is complex”, says Jeličić. “Think for example of the Sussak (Sušak) neighbourhood, which until the end of the second world war was the ‘Croatian part’ of the city, and was administered by Croatia-Slavonia, as opposed to the autonomous municipality of Fiume, administered by Hungary. Rijeka and Sussak are now one city, but they have separate histories (they were even separated by a border, between the first and second world wars), and the double-headed eagle, recently relocated to the town hall, certainly doesn’t represent both areas, at least not from a strictly historical viewpoint”, concludes Jeličić.

From Rijeka to Strasbourg

All of these issues will be discussed in the coming months, as 2020 draws closer. The main hurdle will be the vote in the city council, where Obersnel – in office for a quarter-century – currently holds a narrow majority. “I’ve been following local politics in Rijeka since the 90s, and I expected that, like we’ve done in Istria, Rijeka would also find a way to introduce visible bilingualism”, says MEP Ivan Jakovčić, originally from Poreč. Jakovčić, elected from the ranks of the Istrian Democratic Assembly (IDS), explains that “in Istria we have various models for highlighting bilingualism. The most pronounced, let’s call it total, can be seen in Buje, Umag, Novigrad, Brtonigla, Grožnjan and Rovinj. But this model is not necessarily viable for Rijeka”. For the main seaport of the Kvarner gulf, Jakovčić suggests “a visible bilingualism in the old city”, and dialogue between the various areas of Rijeka. “As a person who fights passionately for subsidiarity, I’m convinced that each part of the city should come up with its own solution”. Could this be the beginning of a debate on Rijeka’s identity?

The European parliament adopted a resolution on regional and lesser-used European languages in 2001, which called on the Commission to present a report on the results of the European Year of Languages 2001, with a special focus on Regional and Minority Languages (RML). In 2003 another resolution was adopted, with particular attention paid to new member states, making the respect of regional and minority languages a criteria for EU accession. Instruments were proposed for the mobilisation and training of teachers of RML. Cross-border cooperation between regional and minority communities and civil society was encouraged. In 2013 another resolution was adopted on European languages at risk of extinction, and linguistic diversity in the EU. The EP has its own intergroup for Traditional Minorities and National Communities and Languages. In 2016 two political groupings in the EP, together with the European Language Equality Network, organised a hearing, where it was concluded that the Commission should view linguistic discrimination as a form of racism.