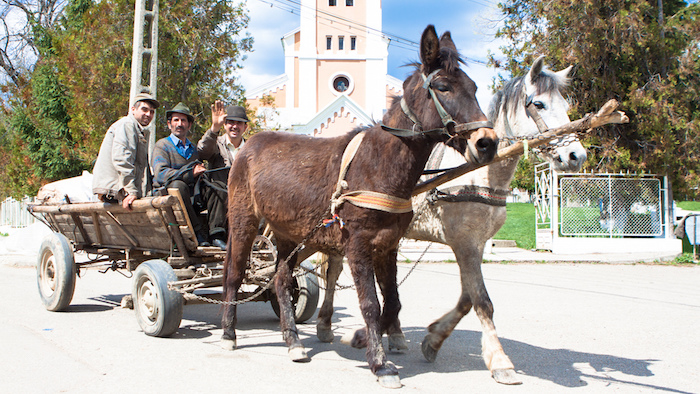 Dilema Veche magazine is holding its annual festival in Alba Iulia (Romania) on 21-23 August. On this occasion VoxEurop and other partner media journalists wrote a text on their relationship with Romania and their Romanian experience.

I cannot hide the fact that I find it amusing how, at a debate on a “New Narrative for Europe” dedicated to “cosmopolitanism,” the question that apparently many would like answered is: “What do you think about our country?”! Of course, it is good to see what others think of us. An accurate self-image can only come from the comparison and contrast of different subjectivities, one’s own, and that of others, and this is one of the great arguments in favor of cultural exchange.

I have to admit I am no expert on Romania, although I have my impressions, and I hope people will not be offended if I am frank.

A first impression of Romania is that of a France of the East (and, as a French citizen, you can be sure this is the highest compliment one can give): A nation born not of a founding race, but by the sword and law of Roman soldiers, a daughter of one of the world’s great empire. Like France, Romania is a fusion of various peoples through a language, a church, later a state. The experience in bourgeois nation-building, from the 1860s onwards, appears to me to have been on a good trajectory and left much beauty. Romania, resister against the Ottoman and Soviet empires, appears as an advanced bulwark of European civilization.

Against this aesthetically pleasing vision, there is less glorious reality: A country which according to most indicators is far below the European average, with high poverty, economic wealth on the level of Turkey, low social trust, and high corruption. Romanians are leaving the country en masse and joining Western Europe. Indeed Romanians are the fastest-growing group in my home city of Brussels today, mainly coming for work, but indeed a huge proportion of beggars are Roma, mostly from Romania. The country then, despite progress, remains a European “laggard.” No doubt, the Ottoman and Communist periods have given Romanian society reason to distrust others and even a kind of national despair.

This despair is visible in Romania’s two most famous expatriate writers: Mircea Eliade and Emil Cioran. Both, in the 1930s, were supporters of the Iron Guard, one of the most passionate and uncompromising nationalist organizations in the world. In short: They believed in their Nation, even reaching toward certain extremes. Yet, Romania was swept away by the War, the Guard destroyed and the Communists triumphant. Eliade and Cioran’s tender dreams for Romania were irrevocably shattered, leaving only a godless and debilitating dictatorship. Eliade sought to escape his Romanian and Western particularism in Eastern mysticism. Cioran turned to nihilism. This was Romanian despair. But how can a society survive and prosper without self-confidence and belief in an ideal?

Romania’s intellectual and social development was gravely stunted and deformed by communism. When freedom of thought is abrogated and the past is politicized, self-knowledge is impossible. Why were so many Romanians nationalists? Why were so many others communist collaborators? These questions must be asked without hatred, without the spirit of a witch-hunt, but examined serenely. Only if one understands one’s past can one approach the future with confidence.

I have often been struck at how many Romanian expatriates I have met had little positive to say about Romanian culture. Religiosity, social conservatism, chauvinism, and even obscurantism are strongly resented. Instead, West-European and especially Anglo-American culture and values are embraced. Great hopes were placed in Monica Macovei, as someone who would “finally” bring European good government and enlightened values to the country. This seems to reflect deep-seated cultural and generational clashes within Romanian society (old vs. young, urban vs. rural).

I am not Romanian so I cannot speak to the weaknesses of the country. But I will say that the West as a whole is deeply sick and the “European Dream” is faltering, having not held all its promises. And many Central European leaders today seem to see no other destiny for their nation other than to be a minor auxiliary to American foreign policy, and a small market and source of labor for the emerging Sino-Euro-American world economic system. Is that enough? Rather then merely seeking to emulate “Europe,” should we not also ask: What could Romanians, looking to what is unique in their heritage, teach “Europe”?

But then these are only the impressions of an ill-informed foreigner who will soon spend two weeks in your country to visit its ancient heritage and beautiful scenery (Bran Castle and the Danube Delta are on the list). So it will be interesting to compare my prejudices with my experiences.

In Partnership with Libris bookshop, in Brașov.