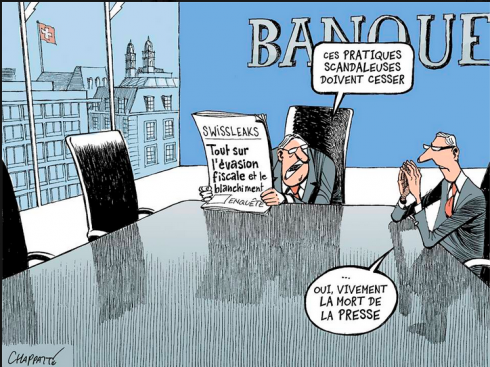 On Newspaper: Swiss Leaks: Read all about tax evasion and money laundering

"These scandalous practices must end"

"… Yes, bring on the death of the press"

Swiss private bank HSBC has been helping clients evade taxes to the tune of around €180bn, it was revealed this week by Le Monde and a group of more than 50 media outlets co-ordinated by the International Consortium for Investigative Journalism. The investigation, known as "Swiss Leaks", is based on documents leaked in 2007 by former HSBC employee Hervé Falciani and reveals the extent to which the bank's Swiss subsidiary colluded with tax evaders, allowing the withdrawal of money in bricks of foreign currency, and creating undeclared "black" accounts for some clients.

HSBC claims that its operations are much stricter now than in 2007, but still faces the prospect of criminal prosecution in the US, with separate investigations launched in Switzerland, France and Denmark.