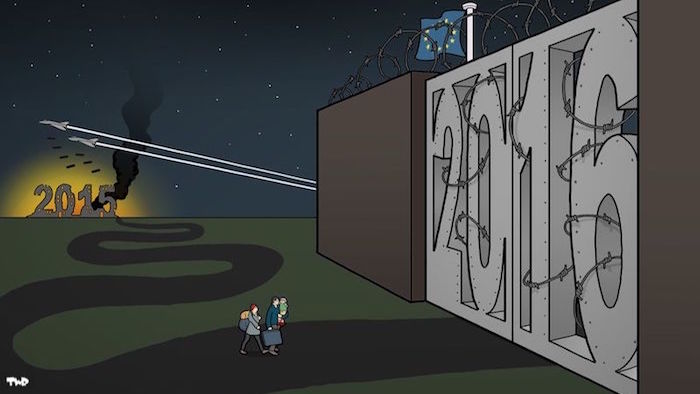 Six questions lying ahead for Europe

Most of the unsolved issues of 2015 – be it the migrants’ crisis, the high unemployment or terrorism – will still be running in the coming year. But the British referendum over EU membership, probably due in June, will outweigh them all, says the co-founder of Wake Up Europe!

The childish cry of “it’s all about me” has often been the subtext of British Eurosceptics’ campaigns against the European Union as well as the Europe-bashing seen in the British press.
It still won’t quite be true during 2016, but there is no doubt that the British referendum on membership will be the single most important event of the year for the EU – at least among the events we know about. Whether that epoch-making vote takes place in June (as most pundits currently expect) or the autumn, it will be affected by other European happenings, as well as in turn affecting them.

Here are the six questions that will really matter next year for the future of the European Union, all of which will affect, and be affected by, the British vote:

1) Can hope be restored for the 22.5 million unemployed in the EU, of which 17.2 million are in the 19-country Eurozone?
While jobless totals have been falling fast in America and Britain during 2015, they have fallen only slowly in the Eurozone. If you seek one main explanation for the votes for extremist, anti-EU political parties such as the Front National in France or the Northern League in Italy, this is it. Economic recovery has been under way, but it has been modest in most of the Eurozone, despite great help from the collapse in energy prices. If it could only be sped up, creating more jobs and leading to rising living standards once more, confidence both in the EU and in globalisation as a whole would begin to be rebuilt.

2) Can European countries prove they can work together to restore order and dignity to the management of immigration?
Nothing, during 2015, did more to discredit Europe than the hapless behaviour of both national governments and the EU as a body in the face of the massive flows of refugees from Syria and other war zones. The EU looked as competent as the Keystone Kops, and national governments looked as collaborative as Kevin Pietersen (clue to the non-English: that’s a cricket joke, as Pietersen was notorious in the England cricket team for being utterly selfish – which led to his being sacked). If they can’t do better during 2016 – building a common border force, setting up efficient processing centres, stopping squabbling about refugee quotas and registration – then the chances of a new crisis and nationalistic break-up will increase.

3) Can European military forces and intelligence services collaborate effectively in policing the Mediterranean and in fighting Islamic State?
Following the many tragic deaths of refugees crossing the Mediterranean in unsafe craft supplied by people smugglers, and following the terrorist atrocities in Paris on November 13th, European navies and intelligence services have been trying to raise their games, which above all means collaborating more. Under way in the Med is an unprecedented effort by several EU navies, led by Italy’s but also including Britain’s, to find a way to deter people smuggling and make the Mediterranean safer. And the Paris attacks exposed claims of efficient information-sharing under the Schengen borderless travel agreement to have been hollow. Next year will provide a stiff test of whether those forms of collaboration can be improved, as well as the more headline-grabbing sort in the military action in Syria and Iraq themselves.

4) Can Europe show enough positivity and flexibility to keep Britain in?
The answers to those first three questions will be an important contributor to the British referendum decision: an EU that offers economic hope and can collaborate more effectively will be an easier sell to voters. British voters don’t expect the EU to be flawless, but they do expect it to show the ability to learn from its mistakes and improve itself. The most devastating line of those seeking to leave will be the claim that the EU is unreformable, unable to improve itself, so the best way to keep Britain in will be to prove that this is nonsense. That won’t be easy in the few months available, which is why some show of flexibility in the face of Britain’s unreasonable and impatient demands will be needed. That doesn’t mean throwing away core values such as freedom of movement, but it must mean some gestures towards progress and reform. For if Britain votes to leave, it will have a dramatic effect on all forms of EU collaboration, and will be a great boost for France’s Front National.

5) Can Europe stick to its principles over Ukraine and Russia?
Pressure from the fight against Islamic State and from European businesses keen on Russian contracts is bound to mount next year, tempting some countries and political leaders to soften the EU’s position over Ukraine. Accept reality, the argument will go: Crimea is now part of Russia, and Eastern Ukraine is hopelessly unstable anyway, so why not let Russia re-draw the borders? The European Union really must not let such siren calls draw it into temptation. If the EU is not about principles such as the inviolability of sovereign borders and the rejection of attempts to change them by force, what is it about? If the rule of law is simply up for negotiation, then it is no rule at all. It used to be said that the EU was all about soft power: if it betrays Ukraine, then the EU will really be all about being soft in the face of power.

6) Can Angela Merkel be brave during her final years in office?
We all know that Germany’s Chancellor is Europe’s decider, its most important leader. But she has been a timid leader, showing her steel only over sanctions on Russia and over the migrant crisis. Both of those moves have cost her political support in Germany. As she inevitably nears the end of her era as Chancellor, however, it is surely time for her to turn her boldness over migrants from being an exception to being the new rule. If anyone is going to rebuild the EU and all it stands for, it is her. The time for her to take risks in doing so is now.