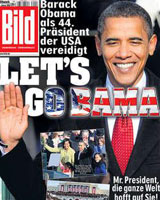 Popular and populist, and often compared to the British Sun, Bild is noted for its huge circulation rather than the quality of its content. With an editorial line that is politically close to the Christian democrats, it is read by the country's politcal leaders who are wary of its extensive influence on public opinion. But Bild is mainly noted for its role as Germany's "confessional," and its focus on gossip, scandal and the public washing of dirty linen.

The Bild website is characterized by the same populist and sensationalist style, and the enormous typefaces used in the paper edition. It covers the front page stories, and like the paper edition tends to disregard hard news to report on cars, football, scantily clad women and the private lives of celebrities. It also features a number of practical sections, which include weather, my money, and lottery results pages. There is also a link to the paper's online dating club.