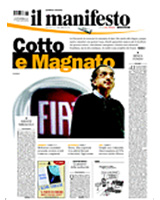 Founded in 1969 by communist intellectuals seeking an outlet for expression outside of their party’s official channels, Il Manifesto is today independent, though remains firmly rooted in the left. An Italian institution, it is often threatened with bankruptcy due to serious financial problems, and owes its continued survival to a general mobilisation of funds from Italian left-wing circles. Il Manifesto was the first Italian daily to have launched in 1995 its own website.