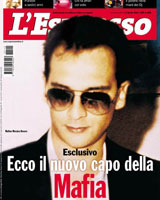 Founded in 1955, by Eugenio Scalfari (who later went on to create La Repubblica) L’Espresso fast established itself as Italy’s foremost centre-left weekly. Like La Repubblica, L’Espresso is owned by Piedmontese industrialist Carlo De Benedetti, unrelentingly hostile to the politics of Silvio Berlusconi.

The site features web-only articles on current affairs as well as previews of items to be published in the end of week print edition, which then become available online.