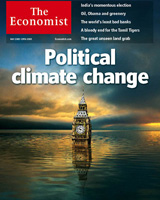 The London weekly, which has acquired a reputation as a world-news Bible, was founded in 1843 by a Scottish milliner. Owned 50% by the Financial Times, it is noted for its support of liberalism — not just economic liberalism, but also with regard to social questions such as the campaign to outlaw the death penalty, gay marriage, and the legalization of drugs.

Printed in six countries, 85% of The Economist's sales come from outside the UK. The various international versions of the magazine — for the UK, Europe, North America and Asia — are distinguished by different content and covers, but they all feature the same editorials. Since its launch, the articles in The Economist have never been signed.

Like the magazine, the economist.com website features its sober presentation. As well as content from the paper edition, it also provides access to feature reports from the Economist Intelligence Unit and blogs written by the editorial team.