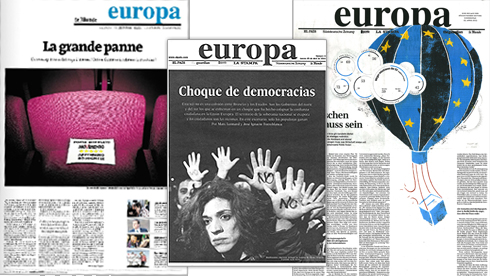 Stalled and in crisis

The fourth issue of Europa, the supplement jointly produced by Gazeta Wyborcza, The Guardian, Le Monde, El País, La Stampa and Süddeutsche Zeitung, focuses on the dwindling public confidence in the European Union, which, as the latest Eurobarometer has revealed, is now at a record low. Euroscepticism, writes Parisian daily Le Monde —

in its multiple forms of populism, nationalism, distrust, resentment and revolt has spread across Europe. For many years, it was a British speciality. However, it has now emerged as the source of the Greek revolt, Italian political chaos, French disappointment, and German frustration at being the focus of so much hostility.

… we are at a standstill, without a strong idea capable of restoring hope, and even more divided than ever. […] The crisis in the construction of Europe and our increasingly insular focus on our own societies and our social models has revived the selfishness and the enmities of the past. The doctrine of austerity may have failed to win hearts and minds, but it has brought with it a coldness that has added to the distance between peoples.

to the Fiscal Compact and far reaching national reforms demanded by the European Central Bank, which have led eurocrats to cross the line on national sovereignty and — going well beyond their brief for food safety — to extend their influence to pensions, income taxes, wages, the labour market and civil service jobs. All of these fields touch at the heart of the welfare state and national identities. […] In this new scenario, governments come and go, but policies, which remain fundamentally the same, are not called into question.

Will this trend result in the end of the Union? “Everyone is hoping that with a return to growth, Euroscepticism will finally abate,” write Leonard and Torreblanca. However, they also warn —

that enthusiasm [for Europe] will not be reborn without a radical overhaul of its behaviour towards member states and citizens.

This "shock of democracies" and this north-south opposition are the de-facto embodiement of the two-speed Europe that used to be mentioned in connection with defence, external affairs and free movement policies, notes the Spanish daily’s deputy editor, Berna González-Harbour. She continues —

… the tragedy is that we are no longer able to keep Europe moving peacefully along two parallel tracks, which, even if they never join, do not cut across each other. Today the two tracks are clearly divergent and inevitably oriented towards disagreement.

In the meantime, the six press titles in the Europa partnership have come up with an number of ideas to break the deadlock in the EU, which are summarised by The Guardian. They range from the abolition of the Strasbourg shuttle between the two seats of the European Parliament, to the creation of a European army, or the development of a “Eur-app” to broadcast the case for Europe on tablet computers and smartphones: “a leading idea that could provide Europeans with symbols and aims evoking emotions, attachment and solidarity.”