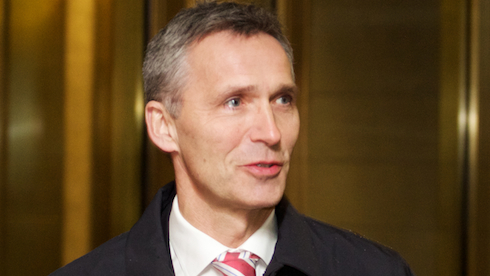 Stoltenberg look to the East

Former Norwegian prime minister Jens Stoltenberg, who became general secretary of the North Atlantic Treaty Organization (Nato) on 2 October, has set a new course for the military alliance from the outset, writes Le Figaro. The French daily reports that Stoltenberg —

offers the Kremlin the possibility of a “constructive relationship” with the West, without changing any conditions: Russia must “clearly” show it intends to respect international law in Ukraine, and, in the meantime, the Atlantic alliance will strengthen its military presence in Eastern Europe.

There is “no contradiction” in this approach, writes the daily, noting Stoltenberg envisages to organise a Nato-Russia council. However, Le Figaro adds, he is aware certain Nato members feel threatened, not just by Russia but also by the Islamic State —

The leader of the Alliance will thus follow the line set by his predecessor [former Danish prime minister Anders Fogh Rasmussen]. His first visits will take him to the two capitals that feel most threatened, […] Warsaw and Ankara. He will promise them Nato’s support in case of an attack. And in February 2015, the 28 defence ministers [of the alliance’s member states] will decide on the military strategy Nato will put on the frontline, notably in Poland and the Baltic states, in the name of collective security.

Last month’s Nato summit in Wales promised to reverse the trend of decreasing defence spending in Europe. And it’s on this front that the mission of Jens Stoltenberg could be the most difficult, at a moment when [Russian president] Vladimir Putin is testing the credibility and means of the Alliance.

Nato’s new general secretary believes these financial questions are crucial if the alliance is to succeed, and promises not budge on this point. But for Le Figaro, the budgetary crises risks to complicate the deal.