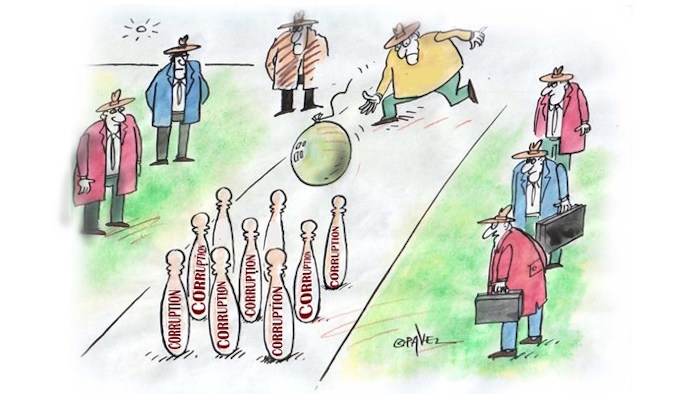 Good governance is also a matter of collective action: the more citizens are connected and the stronger the rule of law, the less society is prone to corruption, explains researcher Alina Mungiu-Pippidi in her latest book.

Why have corruption scandals become so salient in the news? In countries like Brazil, India, Ukraine or the Balkans, many rounds of elections in the past decades have sometimes changed rulers, but never an entrenched system of spoiling public resources that new office winners inherit in full. The Arab spring’s hopes of clearing away corrupt dictators seem to be on the wane – in Iraq, after many years of American administration, corruption remains the number one problem.

Corruption has been made worse in Afghanistan by the influx of foreign aid, which flowed like a new and vigorous river into the exhausted local pool of spoils for the armed and the powerful. International organizations like the UN or FIFA seem to have systemic problems, barely managing to control their public image. International trade, once presumed to be the instrument for increasing competition, also seems to breed corruption, with scandals such as Siemens and Volkswagen showing that nobody is beyond suspicion.

And nobody should be beyond suspicion, as the world is mostly corrupt, and few governments and societies are constrained by their societies to stay clean and fair, argues Alina Mungiu-Pippidi, a Berlin based academic, in a brand new book recently released by Cambridge University Press, The Quest for Good Governance. How Societies Build Control of Corruption. Rather than the usual moralising normative approach, her book oscillates from history to social psychology to argue that governance, which she defines as the rules of the game determining who gets what from public resources in a given society, is far more difficult to change than political regimes as it results from a balance of power between a society and its rulers.

All over the world, she argues, very few countries have changed since we have some measures of governance in the past thirty years, and only a handful have made it to the threshold of good governance, most of them small island states. Her champions are Estonia, Uruguay, Taiwan, South Korea and Chile — with allowance made also for Costa Rica, Botswana, Slovenia and Georgia, who are nearly there.

By and large, she argues that control of corruption in a democracy is a major collective action problem that few countries have managed to solve. If a country has free elections before it manages to construct a sound, autonomous and powerful bureaucracy (the historical examples she looks to is Denmark, allegedly the best governed country in the world) what ensues is a system of political parties politicizing the public sector and spoiling all public resources in their turn. It is possible — the US has done it. But either benevolent monarchs, such as the Danish king, or critical masses in democracies seem difficult to find these days.

The major policy lesson this book, based on one of largest EU social science grants, the framework project ANTICORRP, as well as several other grants won by the author, is that a sound anticorruption strategy needs to build this balance in full, and that one or another of the silver bullets promoted by the international community do not work in isolation or not at all. She presents daunting statistical evidence that anticorruption agencies make no difference where the rule of law does not precede them: worse still, their exceptional powers will be used by the powerful against the weak in politics.

Neither Ombudsmen, nor Freedom of Information Acts make a difference in themselves, and the most corrupt countries following international advocacy have currently the most number of anticorruption laws which change nothing. Estonia has managed the cleanest post-communist transition by reducing opportunities for corruption through its economic liberalisation and administrative simplicity, so curtailing the government’s power of discretion.

But its society was also strong and demanding, the other important element of the balance, with a free press and its e-citizens empowered by electronic tools. The more a country has Internet household connections or people on Facebook, the better governed it is, as this shows the capacity for collective action of its citizens. Mungiu-Pippidi presents evidence of the effectiveness of combinations of factors, rather than factors in themselves — fiscal transparency and an active civil society society, for instance, or freedom of the press and transparent disclosures of politicians’ wealth.

Humans have always had problems keeping and managing joint resources from being spoiled or spent on the basis of favoritism, Mungiu-Pippidi says. Favoritism is rampant, with surveys even in the European Union showing people complaining that political connections are the way to success in life. Bribing is frequently a way to buy access. Collective action problems are hard to solve, the book concedes, for two main reasons.

One is the problem of boundaries: well bounded and limited communities, such as Siena, an Italian city state in the 12th century, had refined prevention systems where members supervised one another as part of their civic duty. The presumption was distrust: and everyone was conscripted to defend the resources of the community, needed for essential expenses like defense. Whenever boundaries are too large, not clear and constituents vague, as in the case of international organizations or global trading, the hard gained local balances do not matter anymore. Companies from best governed countries play by local rules of the game when investing in corrupt countries.

The second, equally pressing problem, is finding some champions. The question of “who” has to be answered before the question of “what” to do, the book argues. Who loses because of corruption and how can they get together their act in some meaningful collective action? Anticorruption is not a win-win game, it’s a game played by societies against their spoilers, and quite a sustained effort is needed to prevent the winners from turning into the new spoilers. Finding champions and endorsing them to build some critical mass of people who believe they can make a life out of decent competition, and not favoritism, is the name of the game if we want to change things.