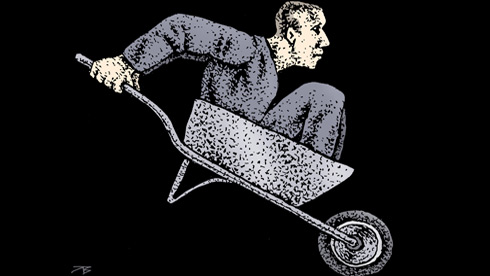 EU labour ministers are meeting today to agree on amendments to the 1996 Posted Workers Directive, but the changes demanded by some member states to fight social dumping from countries including Poland will hamstring the free flow of workers and benefit middlemen.

Poland is up against the wall on the issue of the Enforcement Directive on posted workers. A strong coalition led by France and Belgium and backed by Germany is pressing for changes, which will see Polish workers posted to work abroad hardest hit. Poland is a European leader in the posting of workers overseas, sending some 250,000 of them abroad every year.

The drastic tightening of regulations on worker posting has one goal: to reduce the inflow of workers from Poland and the other eastern European member states to the wealthy countries of western Europe.

The proposed Enforcement Directive comes as yet another in a series of measures aimed at shutting Europe’s doors against the paupers from the East, such as the crackdown on "benefit tourism" in the UK and Germany or French deportations of the Roma. Another example is the criticism of Polish workers in the Netherlands, where they are accused not only of taking jobs away from Dutch people but also of being unable to behave properly in public places.

All these are much more than just controversial ideas floated by second-rate politicians trying to exploit national animosities for electoral gain. During the negotiations of the Enforcement Directive, Belgium directly accused Poland of social dumping, [ie flooding the market with cheap labour] as if forgetting that few Flemish and Walloon workers are willing to perform the kind of jobs entrusted to workers from Poland.

And that they won’t change their mind once the door for Polish posted workers is shut. The Poles and other eastern Europeans will keep coming to perform the heavy, low-paid jobs that French or German workers won’t take. Only this time it will be black-market work, without tax – so perhaps the hourly rates will actually fall further.

The only ones to benefit from the solutions that are to be discussed in Brussels today will be dishonest middlemen. Eastern European workers will be negatively affected, and will have to join the grey economy, and the national budgets, deprived of the taxes now paid by legally posted workers will also suffer. But the biggest loser will be Europe. In the name of populist slogans, it is about to take a huge step back on one of its major achievements: the free flow of people and services.

A symbol is turned into a foil

Because the noble principle of the free movement of people constitutes a building block of the European construction. Because, by shamelessly hijacking it in order to transform it into a tool for social dumping, some unscrupulous businesses contribute to the transformation of Europe into disarray. Because this issue is the very symbol of an incomplete European project, in which laisser-faire attitudes in the name of competition, have opened the door to too much excess.

It is more than high time to seriously open the chapter of a social Europe by building bridges with the aim of harmonising practices to higher standards. This is a way of refuting the impression that is gaining ground among a growing number of citizens that they are an adjustable variable rather than the true beneficiaries of this much touted great internal market. If they deny what is evident, the 28 are paving the road for the Eurosceptics in the next ballot. This does not bode well for more solidarity in Europe or for a more prosperous future.