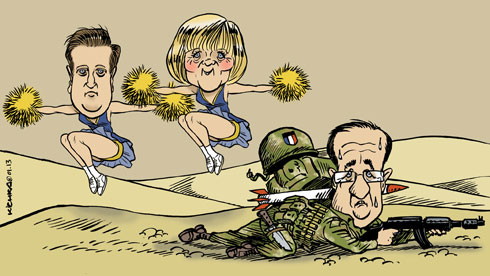 Stupidity and stinginess in Mali

Despite what its European partners say in public, France is alone in fighting the armed Islamists and helping rebuild the Malian state. The EU's inability to agree on major global issues will cost it dearly one day, argues Le Monde.

The meeting of the EU Foreign Ministers, held on March 11 in Brussels, has once again left the impression of an EU unable to agree on major international issues. This short-sighted attitude could have serious consequences.

More disenchantment with Europe is not what we want. With a great funk of depression hanging over the continent, we are reluctant to expose yet again the vacuity that distinguishes the European idea these days. In short, we still hesitate to play the pessimist by drawing attention to the discouraging absence of Europe in matters of defence and foreign affairs.

This is not a failure. A failure would imply that we gave it our best shot. No: it’s a debacle, a sad farce, and Mali has demonstrated that masterfully. This held especially true for the meeting of the foreign ministers of the 27 member states in Brussels on March 11. France has felt more isolated than ever since the start of the military operations in the Sahel.

With the courteous, somewhat aloof firmness that is his trademark, French Minister of Foreign Affairs Laurent Fabius was reduced to begging for 30 soldiers from Belgium and Spain to be sent to Mali. Not 300. Only 30. Why? Because another 90 are still needed to protect the 500 instructors the EU has sent to Bamako to train the Malian army.

These 90 soldiers must be “prised” one by one away from the grip of the 27 countries of wealthy Europe, which prides itself on ranking amongst the greatest economic powers in the world. Let’s just call it as it is: the reluctance shown by the Belgians and the Spaniards is not political, or even financial. It’s much simpler than that: Brussels and Madrid could not care less about what may happen in the sands of the Sahel.

Hypocrisy has triumphed. On paper, the bloc are all in agreement. The stability of Africa depends heavily on extinguishing the jihadist fire spreading across the Sahel, say the Europeans; so too does the security of Europe, so close and so vulnerable to Islamist terrorism.

But these are just words. When it comes to acting jointly, no one, or almost no one, shows up. For sure, Paris was wrong at the start to send in its troops without consulting with its partners. But a true European solidarity would have been necessary then, a show of a common interest, a common defence – in short, the sharing of a burden that will have to be carried in the future.

The EU should have shown a strong presence in this part of the world, without leaving it to China, the United States or others to become the privileged partners of the Africans in the 21st century.

Unfortunately, Europe has displayed only pathological disunity and blind stinginess. Only five out of the 27 member states are really involved in the mission to train the Malian army. Beyond sententious declarations on the need for a “plan for the political and economic stabilisation of the Sahel”, the thinly veiled response of most of the 27 member states to events in Mali can be summed up in one sentence: “Let France handle it." So much for the contradiction between suspecting the French of postcolonial tendencies and letting them man the front line in Francophone Africa...

Europe is fleeing from history. It will pay for it one day.