Croatia, Kosovo, Montenegro: in the space of a fortnight, the leaders or ex-leaders of all three countries have been arrested or accused of wrongdoing. Meanwhile, reports a Montenegro weekly, the EU is paving the way for the accession of all three Balkan countries.

Milo Djukanović on the day of his resignation, 21 December 2010 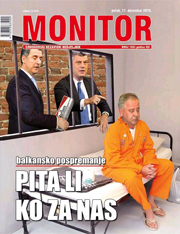 Like something out of a political thriller, former Croatian prime minister Ivo Sanader was arrested in Austria [on 10 December] undera warrant issued by his own country. He is now waiting for extradition in a Salzburg jail and says he’s prepared to answer corruption charges. A day or two prior to his arrest, right before parliament lifted his immunity, he fled Croatia and was planning to “attend” his trial from the United States. But his plan fell through when the Americans cancelled his visa and his Austrian “friends” put him in lockup. Yet only a year ago, Washington and Vienna were praising him to the skies.

The winner of the recent elections in Kosovo, prime minister Hashim Thaçi, didn’t even have time to celebrate. The day after Thaçi’s victory, Dick Marty, the Council of Europe rapporteur renowned for sleuthing out the CIA’s secret prisons on European soil, published a report describing Thaçi as the head of an organisation that bears a striking resemblance to a mafia: it traffics in arms, drugs and, as in a horror movie, even organs.

Marty’s accusations follow up on revelations by Carla Del Ponte, former chief prosecutor for the International Criminal Tribunal for ex-Yugoslavia, in her book The Hunt: Me and the War Criminals. In the 1990s, in his capacity as “boss” of the Drenica group [“a small but inestimably powerful group of KLA (Kosovo Liberation Army) personalities” according to the Marty report], Thaçi is said to have arranged kidnappings and had the prisoners sent to Albania, where their organs were removed.

Life in the Balkans is grislier than fiction. As if the wars and atrocities of the 1990s hadn’t been enough, most of the countries in the region have now fallen prey to firmly entrenched systems based on kleptocracy, organised crime and sham patriotism. Out of the ruins of a one-time single state, strange elites have emerged, elites that should have been jailed or exiled.

The unbounded power of these elites rests on tremendous wealth. The leaders of the region, from Zagreb to Pristina, have siphoned off national funds into their pockets and those of their cronies. Their colossal clout has been shored up by an army of propagandists, who are forever doing their bidding in the media or in university history and political science departments. They describe their national leaders as messiahs, and their opponents and those who testify against them as criminals. The impoverished masses, when called to the polls, have merely endorsed the lie that the liberators have come to power and are the guarantors of states that are exposed to endless threats.

Admittedly, the international community is largely to blame for the shambles in the Balkans. “I reread the secret documents on Thaçi drafted by Western analysts, with a feeling of horror and moral shame,” writes Marty. They knew everything, but were betting on Thaçi. Marty’s report reveals what Western diplomats admitted off the record: in Kosovo, the West favoured stability to the detriment of justice, writes the Reuters agency in one analysis. As if stability could be established without justice!

The diplomats in Podgorica who publicly praise Milo Djukanovic [the prime minister and ex-president of Montenegro resigned on 21 December] allow in private that, in terms of its political system, Montenegro is closer to Kosovo than to Croatia. Djukanovic would be elated if the main problem facing his government were its illicit ties to a close friend’s advertising agency or some loans granted to his friends by Hypo Alpe Adria [Austrian bank implicated in various graft scandals]. Those happen to be the main charges against Croatia’s prime minister Sanader.

Let’s get back to the analogy with Thaçi. Fortunately, here in Montenegro we did not indulge in organ trafficking, but we did excel in other rackets. We had our own dealings with the devil. After cigarette trafficking, Montenegro became the hub of cocaine and heroin trafficking. In 20 years of practically unshared power, our prime minister, along with his partners and family, has cornered the country’s economic resources and launched into some highly dubious enterprises, including the privatisation of the Aluminium Combine in Podgorica and of the steelworks, or the Prva Banka [owned by Aco Djukanovic, the prime minister’s brother], to name just a few. In any normal country, the Prva Banka affair alone, which brought the whole financial system down in Montenegro, would have been enough to put the prime minister, his brothers and his godfathers behind bars. But the West watched it all benignly and sang Djukanovic’s praises for a long time.…

Are we now finally coming round to the realisation that the greatest menace to stability in the Balkans is not ethnic conflict but organised crime? The West finally seems committed to fundamental changes that have been put off for too long. Witness the Sanader case in Croatia, the Council of Europe report on Kosovo, and the demand for top-level anti-corruption measures – the EU’s precondition for commencing accession talks with Montenegro [the country obtained accession candidate status on 17 December].

The big cleanup that has begun in Zagreb is bound to hit Montenegro, where the supremo and his business cronies are likely to be put on trial for pillaging the state. And for starters, the boss has got to go.

Europe has to get involved

In southwest Europe, the EU has two options: either integrate all the countries in the western Balkans at one fell swoop, or brace itself for new unknowns. Those who believe the countries in the region are capable of coping with the challenges of the transition on their own are deluding themselves. Europe needs to understand that stability in the Balkans can’t be the only objective. The demoralisation of Balkan societies has a dynamic of its own that is going to push people in search of a better life abroad. Stability without development in merely proof of political and economic stagnation.

That’s why Europe has got to act. Right away. As it did in the Sanader case. The big crackdown on corruption began in Romania and Bulgaria. It is ongoing in Croatia, and will doubtless make its way over to Serbia and the other accession hopefuls. Everyone, bar none, has got to go through purgatory first.