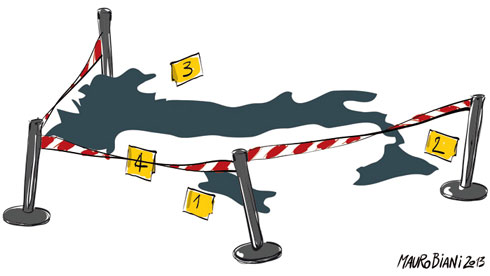 The burdensome legacy of Il Cavaliere

Silvio Berlusconi has been expelled by his peers from the Senate and stripped of his immunity in a long-awaited vote on November 27. Despite no longer being in Parliament, Il Cavaliere has indelibly left his mark on this era and society, writes Barbara Spinelli.

Following the vote to expel Berlusconi from the Senate there is a great temptation to consign to history the 20 years that Berlusconi, four times president of the Council since 1994, has been in power. It’s a temptation we know well: once the anomaly has been neutralised, one gets back to normality. As if the anomaly – a momentary digression – had never really existed.

In 1944, it was not an Italian but an American journalist, Herbert Matthews, who declared in the columns of the literary magazine Mercurio of Alba de Céspedes: ”You have not killed it! Far from being dead, fascism continues to live on in the minds of Italians. Of course, not in the same terms as yesterday, but in the way of thinking, of acting.”

The infection, our “disease of the century”, has lasted a long time. This also applies to the alleged fall of Berlusconi. It is a relief to know that he will no longer be a critical factor for the parliament and the government. But Berlusconism is still here. And it will be not easy to wean ourselves off this drug that has fascinated not only politicians and parties, but the entire society.

I say “the alleged fall” because even after his removal, Berlusconism will continue. This means the battle will also go on for those who aspire to rebuild democracy and not just to stabilise it. The two decades of Berlusconi should finally be assessed: how was Berlusconism born? How could it have taken root?

[[Once stripped of his office, sentenced to community service, the leader of Forza Italia will still have two formidable weapons]]: an intact media apparatus and “monstruous” financial resources – even more monstrous in lean times. Barred from the Senate, he will communicate with the Italians by interposed video messages.

More fundamentally, though, it is his cultural and political heritage – his ways of thinking, acting, the "disease of the century" – that will persist. Without a profound look deep into our conscience, this legacy will continue to intoxicate Italy. To start with, the conflict of interest, then the incestuous relationship between politics and racketeering: the two endure as the modus vivendi of politics. Berlusconi’s expulsion absolutely does not delegitimise them.

Another legacy is the total separation of politics from morality, or even opposition to the latter. It has become a habit, a creed that has turned into a plague. [The poet] Giacomo Leopardi has already called Italians cynics, because they are more cunning, more careless and less romantic than the peoples of the North. Nothing has changed. One still clings to Machiavelli, who distinguished politics from morality and is used to argue that the end justifies the means. But this outrageousness embodies our deepest vices: the means become the end (power for the sake of power) and change that end.

The myth of a civil society is another legacy of the last two decades: the notion that the people is better than its leader, that its verdicts overrule those of the courts. Made sovereign by democracy, civil society embodies the general will, which never errs. What’s more, wrote Salvatore Settis, an art historian and Italian intellectual, civil society is ”often regarded not only as distinct from the State, but as its adversary, almost as if the State (embodied by temporary governments) was by its nature destined to be the enemy of the common good”.

This formula, so disfigured, has its emulators. The oligarchic cannibalisation of civil society (or of the “technocrats”) is increasingly discrediting politics and bringing the culture of amorality and illegality more and more to the fore. [[Bad education is becoming a characteristic of the elite, which seeks to use politics as leverage, even against the rules]]. And this elite eventually creates permanent exceptions, perfect congruences between necessity, the lack of an alternative, and stability.

The same goes for secular society. Over these past 20 years, it was not only held at a distance; it has been held in horror. The pontificate of Pope Francis has changed nothing there, since the Church will benefit more broadly than ever from a positive bias, even on issues such as the reform of the Church promised by the new Pope. The secular battles will find it hard to find room in an Italian political scene that welcomes its dependence on the Vatican.

And then there is Europe. In the reconstruction of the story of his fall in 2011 Berlusconi blamed a string of cunning tricks played on him by the European Union, Germany, and France. Yet again, with the prowess of a demagogue, he put his finger on the biggest shortcoming of Italy: the ”Italy enslaved” unmasked by Dante [Purgatory, Song VI].

No, we have not wiped out Berlusconism, because the society has been corrupted. We will emerge from these 20 years of amorality, immorality and illegality only if, looking at ourselves in the mirror, we recognise our own image behind the monster. The civil strife and the policy of emergency directed by Berlusconi has blocked the civil and economic growth of our country. An entire generation has been sacrificed on the altar of imaginary stabilities.

“His faithful followers will not leave him all alone”

Silvio Berlusconi's media allies greeted the news that he was expelled from the parliament with a certain scepticism regarding whether this would mean his disappearance from the political scene. "The current situation in Italy is paradoxical," says conservative daily Il Foglio, adding "indeed, three of the main political leaders (or potentially so) – Beppe Grillo leader of the [Five Star Movement], Matteo Renzi of the Democrat Party] and now Silvio Berlusconi – are not in parliament". For the paper, the three men are the most popular with the voters especially because they reject the austerity imposed by the European Union, to which the government of Enrico Letta is, for its part, very attached.

This view is shared by Il Giornale, a daily owned by the Berlusconi family, which runs a headline warning of nothing less than a "Coup d'Etat" and claims, that "they are chasing away Berlusconi and will raise taxes immediately afterward." The paper also warns opponents of the former prime minister that –

No one should have the illusion that the revocation will impede Silvio Berlusconi from being the political leader of millions of Italians who still hope for a free and liberal country. [...] Let no one think of busting our chops with stories of stability. There is no stability without fiscal efficiency, without freedom and without justice. [...] Berlusconi must not think this will be a walk in the park. It will be tough, but his faithful followers will not leave him all alone. That is a certainty.