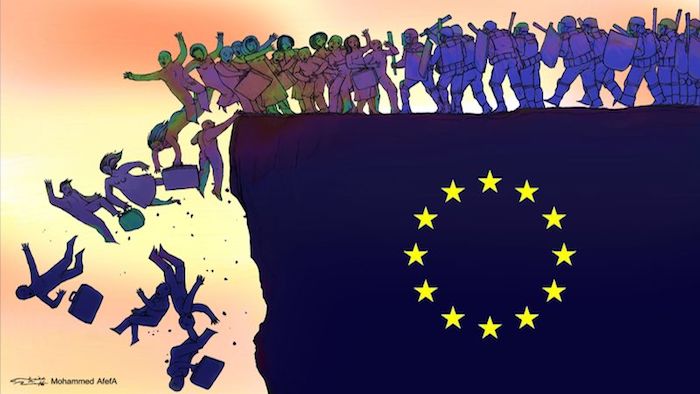 ‘The counter-revolution has begun’

Meeting for the first time since 1973 without a British Prime Minister in Slovakia’s capital, the EU’s heads of state and government had to agree on a common position over Brexit and to set the Union’s priorities for the months to come.

Divided as never before over the direction of travel, they were only able to come to a minimal agreement, Europe’s editorialists lamented.

For anyone expecting a new beginning or a new lease of life for the EU, the Bratislava Summit was a disappointment, Hendrick Kafsack argues in the Frankfurter Allgemeine Zeitung. The editorialist compares the meeting of the 27 to a –

family therapy session: heads of state and government from the 27 have understood that they cannot brush aside the importance of Brexit by saying it was simply a blip caused by misinformed voters. There have never been so many doubts about the EU from its citizens, whichever state they belong to. [...] The aim of Bratislava’s therapy was therefore to convince citizens of the EU’s value through concrete measures. [But] in reality, the EU’s members cannot agree on how to find solutions to its numerous problems. The EU cannot function without the support of member states: this was Bratislava’s slogan. And the Commission [...] must also play the game. Under Juncker the Commission] has distanced itself from a policy of imposing over-detailed regulations that disrupt the daily life of EU citizens. But it is missing a central element required by any good therapist: consistency. Neither its stop-start strategy at the onset of the refugee crisis, nor its economic policies, nor the non-application of the stability pact has allowed it to restore confidence to EU citizens.

The editor of the Opinion Page at El País, José Ignacio Torreblanca, argues that after the Bratislava Summit and –

faced with anti-european populists, a generation has discovered it was preferable to remain in the EU and to transform it into a closed body rather than leave it. [...] A great vacuum, a nothingness, seems to have overcome this politically inept European Union. But politics abhors a vacuum. [...] And this is what is happening in the EU. While the pro-Europeans are still wrapped up in their usual scholastic debates about a multi-speed Europe, intergovernmental federalism, the virtues of the ‘method of the Union’ against the ‘Monnet method’ or the need to create a banking union, a group of leaders, all from central and eastern Europe, has begun to surreptitiously take the reins at the EU. With the dysfunctional Franco-German axis now caught in a xenophobic and populist panic in a year of national elections, Hungarian leader Viktor Orbán (ideological champion of non-liberal democracy), Slovakian Robert Fico (another pronounced enemy of refugees and non-Christian refugees) and the Polish Beata Szydlo (a hardline chauvinist) have succeeded in marking the Bratislava Summit with a sovereigntist and identity-driven mood when it comes to the asylum and refugee policies in the EU. In view of this push driven by another Pole, European Council President Donald Tusk, and the silence of other member states, the Commission and the European Parliament are preparing to withdraw their commitment to put in place an asylum and refugee policy based on our core principles. [...] The counter-revolution has begun.

Although the European summit was held in their country, the Slovak media did not hesitate in writing it off as a failure. For the Bratislava daily SME, even though “this summit should not ever have been considered a turning-point, we expected it to be the first step in the path to a better European Union, more open and more efficient. The meeting of the 27 in Bratislava had in fact only one objective: to show unity. But it would seem that not even this has been achieved.” The newspaper highlights that “before the summit, all the leaders behaved as if they had received specific instructions on what they ought to say to journalists. They all talked about unity, diagnosing the EU’s problems, its vision,” but “less than 24 hours later, Italian President Matteo Renzi surprised everyone by criticising the outcomes of the summit.” He expressed his disappointment over the lack of a coherent policy on the question of migration. Hungarian Prime Minister Viktor Orbán presented a diametrically opposite point of view, arguing that the EU should not impose a common migration policy on member states:

He said Brussels has a naive self-destructing migration policy. [...] His speech was above all addressed to his own voters – knowing that Hungary is holding a referendum on the refugee quotas in two weeks’ time. [Slovak] Prime Minister Robert Fico was the summit’s host, European Council President Donald Tusk was the moderator and it was European Commission President Jean-Claude Juncker who set the agenda. But, analysts have pointed out that Chancellor Merkel was ‘directing’ the summit. Everything ran according to her script.

“The European triumvirat, which had seemed to achieve a new importance at the Ventotene summit” in the beginning of September, “appears to have shattered by the end of the Bratislava Summit last Friday,” writes Eugenio Scalfari. The true doyen of the Italian press, at 92 years old, argues in La Repubblica that “Hollande and Merkel have agreed on a very different arrangement than that of reinforcing European unity. That of limiting immigration through a policy of African support and finance by the EU and possibly the US [...]”. The next elections for the three leaders –

certainly had an influence on what happened in Bratislava, but that was no simple mise-en-scène. Europe lies in pieces. Countries in the east, most prominently Poland and Hungary, are acting as if the EU no longer existed; the Balkans are a weak link. Austria, Denmark, Sweden and Switzerland prefer nationalism to europeanism. That is to say nothing of France, of its sovereignty and its weakness.