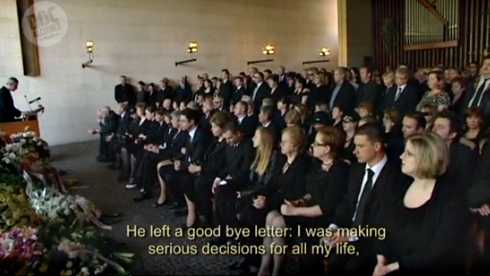 The crooked judges of Slovakia

Almost a year after the so-called “Gorilla” file lifted the lid on corruption in Slovakia, a new documentary reveals a Slovak judiciary controlled by a clique of unscrupulous judges ready to thwart those who resist them. Its director, Zuzana Piussi now faces up to two years in prison.

The funeral of Juraj Majchrák, the vice-chair of the Slovak Supreme Court. A still from "Disease of the Third Power".

A delicate blonde woman with the squeaky voice of a child has proved capable of enraging people high up in the Slovak judiciary. Her documentary on the diseased Slovak justice system, called “Disease of the Third Power”, has become a symbol of rebellion against the closed circle of judges who mock justice itself.

Zuzana Piussi has already felt the power of this clique for herself: one of the judges the film portrays has filed a criminal complaint. And the young investigator questioning her at the police station said apologetically: “You know, there are pressures around here.” If convicted, she faces up to two years in prison.

The Slovak judiciary is run by a group of judges who treat the justice system as a milk cow and rule favourably for “mafia groups”. Some 70 percent no longer trust it. Even the current Minister of Justice Tomáš Borec says that confidence in the system “could not be worse.” The assessment of the World Economic Forum, which puts Slovak law enforcement at 140th place among 144 countries, is also crushing.

How could something like this happen in a country that otherwise belongs among those that managed the transition from communism to democracy successfully?

The man who has left the deepest mark in the modern history of Slovak justice is Stefan Harabin (55). A former communist judge and a good friend of former Prime Minister Vladimir Meciar, he has been the head of the Supreme Court for years and was also a Minister of Justice. Harabin’s greatest impact, though, has been as the long-time head of the main lever of power within the judiciary – the Judicial Council.

To some he comes across as a dance-floor charmer, to others as a vulgar tyrant with a thirst for power and revenge against his critics. Thanks to servile judges around him, Harabin has already sued Slovak media for many tens of thousands of euros for “damage to his reputation”.

Harabin has taught members of his clique other tricks, too. In October he even won a lawsuit against the Slovak state. The judge awarded him 150,000 euros in damages from the General Prosecutor’s Office for having damaged Harabin’s reputation a few years earlier by publicly confirming the authenticity of a private phone call between Harabin and the Albanian drug baron Baki Sadiki, which was published in the media. Sadiki escaped, and was later sentenced in absentia to 22 years in prison in Slovakia.

In 2003 the Judicial Council became the symbol of independence and the highest body in the system of judicial self-regulation. However, the Council came under the control of persons with bad reputations and began crushing its critics.

The originator of the idea, the prominent vice-chair of the Supreme Court, Juraj Majchrák, was the first casualty. When in 2009, as head of the Supreme Court, Harabin instituted a series of disciplinary proceedings against him for alleged dilatoriness and demanded the strictest punishment – removal of a judge from office. Majchrák fell seriously depressed. In April 2011 he hanged himself in the garage of his home.

At the funeral, which despite the solemnity turned into something of a demonstration against Harabin, one of the judges said openly that “bullying” had played a part in Majchrák’s death.

The story of Judge Marta Lauková is also a sad one. In spring 2009 she received a note from her superior pressing her to release from detention a man suspected of belonging to an international gang of human traffickers – it was a “request from the ministry” (then controlled by Harabin), she said. Lauková refused and filed a police complaint alleging an attempt to influence her verdict.

She soon began to be bullied from higher up, was transferred to civil law, had her attendance checked, and was humiliated. She collapsed and fell ill. The Judicial Council denied her sickness benefits, alleging that she was faking her illness. Shortly afterwards, she fell into a coma and died of heart failure.

Her senior colleague, who was taking revenge on her and forcing the stopping of her sickness benefits, was Helena Kožíková. This is the judge who has now filed a criminal complaint against director Zuzana Piussi for capturing on film the dramatic moment when the daughter of the dead judge blamed Kožíková to her face for having played a part in her mother's death. In addition to imprisonment, Kožíková wants to sue the Slovak television director for 40 000 euros in damages in a civil trial.

Change is on the way

The deaths of two judges were perhaps the proverbial droplets that woke the silent majority from their sleep. “It must not be wasted,” rang out at a public meeting of the new judges’ initiative ‘For an Open Judiciary’. “There are about 50 of us,” says association President Judge Javorčíková. “Thanks to the media, more and more people are hearing about us, so today they won’t dare bully us as they did a few years ago. And the public is starting to be more sensitive.” The Slovak Republic has some 1,400 judges, of whom a relatively small part (some tens) created the clique that controls the tip of the hierarchy.

And there is already something happening. While Harabin still controls the Judicial Council, he no longer has a majority. The disciplinary proceedings against recalcitrant judges, which resemble criminal tribunals under the communist regime (the wrongdoers, after all, “are damaging the reputation of the justice system”), are attended by colleagues come to show solidarity and by the media and European ambassadors as well.

The case against Zuzana Piussi is being followed too. A petition has begun to make the rounds, in the style of petitions under the Communist regime. The signatories approve of the alleged offence of Piussi – a shot of Judge Kožíková included in the film without her consent – and demand the same punishment for themselves. Hundreds of well-known names have signed the petition.

The film ‘Disease of the Third Power’ has been posted for free on the Internet, where tens of thousands of people have already watched it.

“What has it come to that people sign a petition to defend others, as used to happen under communism?” Zuzana Piussi asks. “Without that support, though, I would probably go to jail.”