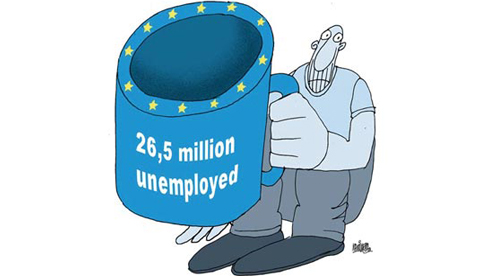 The dawn of an age without jobs

The leaders of European Union member states meet in Brussels on June 27-28 in hopes of boosting employment, especially for young people. But in Portugal, as in a large part of Europe, unemployment has become a structural reality, where temporary fixes cannot claim to be long-term solutions.

According to Eurostat figures, 26.5m people were without jobs in the European Union in May 2013.

The encounter took place in Portas de Santo Antão Street [in downtown Lisbon]. A man came towards me and asked if I knew where he could find work. He told me he came from Arouca [a town east of Porto], where he’d been a gardener. He seemed desperate. All I could do was suggest he go to construction sites to see if they could find him a spot. I could not help but think he had a better chance around Arouca than here in Lisbon. In my grandmother’s day, immigrating to the capital was a chance to escape a destiny of eternal poverty. Taking the same path today is above all an act of desperation – as I guessed it was for this man.

Unemployment statistics are terrible. One way or another, with more or less conviction, politicians think they can do something about unemployment. They even think they can bring it down rapidly. They are in error and they lead us in error. As moving as the stories of these men and women from Arouca and elsewhere are, the truth is that high unemployment is here to stay – and not only in Portugal. Two years ago, no one predicted such high unemployment levels for Portugal, and no one could imagine a level close to 18 per cent without accompanying social unrest. Leafing through the newspapers of 2009, 2010 and 2011, it is easy to find the dire forecasts of the unrest that would erupt if unemployment rose to 10, 12 or 15 per cent. These figures were surpassed, but nothing happened as expected. Why is that?

First of all, unemployment rose beyond expectations, because it did not unfold as forecast by the multiplier effect of macroeconomists. The recession destroyed more jobs than predicted, because more jobs were in danger than thought. This is especially true in the retail and foodservice industries, keeping in mind that these types of firms were the sorts of businesses we preferred to create. Portugal managed to have four times more restaurants and cafés per thousand inhabitants than the European average. And the Portuguese spent twice as much as the Germans, in percentage of revenue, on dining out. Slight alterations to consumer habits, such as those observed during the crisis, turned out to be fatal for the nation’s economic fabric.

The same phenomenon occurred in other highly labour-intensive sectors, such as construction. The problem is that when the rebound comes, if it comes, it is not expected or even desirable that the miracle of the multiplication of small cafés or a boost in construction will re-occur – on the contrary – which means that the current level of unemployment will be difficult to absorb.

Last April, GALP [a Portuguese energy conglomerate] inaugurated a renovated refinery in Sines. At €1.4bn, it is the biggest industrial investment in the history of Portugal. It will have a huge impact on our balance of payments, because we will export diesel fuel. All of this is excellent, except when it comes to the impact in terms of jobs. Only a hundred people will benefit. That is next to nothing, and it is an example reveals the dilemma of modern economies. Huge investments, including investments in heavy industry, are capable of having a significant impact on competitivity and on the trade balance, but they create very few jobs. Sometimes they even reduce the number of employees. What is true of GALP is also true for most of the industrial sectors in Portugal, as well as for the rest of Europe.

This is why we must look askance at the promises of “reindustrialisation”, which are among the speaking points of most of our governments and of their European counterparts: it may be good for GDP, but has a tiny effect on employment, one of Europe’s major problems. We would do well to remember six million jobs have been destroyed over the past four years, according to the International Labour Organization (ILO) . But the problems are not limited to industry and the increased use of robotics. There are other sectors, such as services, in which innovation has led to greater efficiency, which nearly always results in doing the same thing, or more, with fewer people. The most innovative economic sectors, such as those linked to new technologies and biosciences, can also be highly profitable and produce high volumes of business, but they create fewer jobs than the equivalent investment in more traditional sectors – those that are already saturated.

In Europe, there are other factors that complicate job creation. The first is the lack of innovation, a field in which we are far behind the United States. The second factor is the relatively high cost of labour and the rigid labour market. To make the same product, a US factory has more workers, while a European one has more robots. It seems more modern, but it must manage the employment problems that we are facing. The third factor is an unfavourable demographic dynamic, which is creating major financial pressure by putting a high cost on social protection and which, at the same time, means that there is less new blood or experienced people or innovators entering the labour market. It will not be easy to turn this situation around.

It is common knowledge that without annual growth above 2 per cent, there is no net job creation. Yet, this level of growth is becoming more and more utopic in Portugal, Spain, France and maybe even Germany. This means that we will have great difficulties in reducing unemployment. It is most probable that we are entering a period of chronic unemployment, unless we change many things in our social contract.

Consider the following dilemma: just about everywhere in Europe, the rise in life expectancy and the unviable nature of pension schemes has pushed governments to push back the legal retirement age. There seems no other option in the face of the traditional gaps separating childhood from youth and working age from old age. Yet, by staying longer in a stagnant job market, the older workers are not freeing up jobs for youth, which leads to record youth unemployment rates. But, because our economies are not able to pay for a large population of pensioners, the gridlock seems total, unless we come up with some innovative solutions, such as a transition period between working age and old age, characterised by part-time employment at lower wages. We must thus find new ways to distribute a good that is less abundant than we thought – paid employment – and seek free-time and leisure activities, as well as lifestyles, that are less determined by unlimited access to consumer goods.