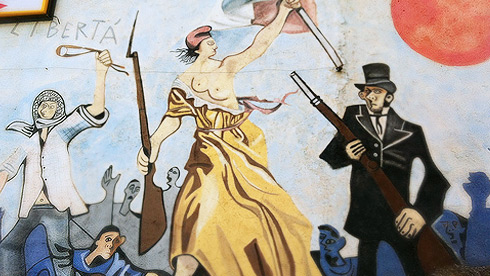 The day the middle class will rise up

When the middle classes revolt, our political leaders will realise that they have been sitting on a powder keg, warns Polish philosopher Marcin Król. In the absence of any prospect of social advancement, they may choose revolution as a last resort to make themselves heard.

Luigi_Passeto  | Fresco inspired by Eugene Delacroix's "Liberty Leading the People" in the village of Orgosolo, in Sardinia

Notwithstanding received ideas to the contrary, the poor and downtrodden have never been the driving force behind western revolutions. They have always been instigated by the middle class. This has been the case with every uprising since the French revolution, with the exception of the October Revolution, which was a coup d'état perpetrated in a context of extreme political disorder.

But when does the middle class decide to instigate a revolution? First and foremost, we are not talking about the entirety of the middle class, organised groups, or a particular community, but about middle-class leaders — the ones who currently win elections throughout Europe, who are dubbed irresponsible because they do not belong to the geriatric traditional political class — who not only can prove to be extremely popular but also astonishingly efficient.

In the classic case of the French Revolution, the revolutionary vanguard was composed of lawyers, entrepreneurs, civil servants of the time and sympathetic army officers. The economic factor was important, but not primary. Revolutionary movements are first and foremost triggered by an absence of openings in public life, and the impossibility of social advancement.

When the French aristocracy demonstrated that it would go to any lengths to limit the influence of lawyers and businessmen, it launched a revolution that inspired members of the new middle class and other disenfranchised citizens in countries all across Europe, with the exception of "commonsensical" England.

The telling example of Cyprus

But how does this compare with discrimination today? In a nutshell, it is the same only different. The aristocracy no longer decides everything, but bankers, stock-market speculators and executives who earn hundreds of millions of euros, have cleverly excluded the middle classes from decision making, leaving them to suffer the consequences. Cyprus is the latest example of this state of affairs, and a very telling one.

And there are many others. Take for example the situation of academics, who, not only in Poland, but throughout Europe, are trembling for their jobs, especially if they have the misfortune to teach subjects that are deemed to be of little utility by the European Union, member states and the multinationals that dictate the labour market.

In Slovakia, for example, the humanities have been all but wiped out, to a point where the material well-being of specialists in history, grammar, ethnography and logic is a matter of serious concern. In the near future, they will be followed by other socio-professional categories, particularly civil servants, who were recruited in such huge numbers in the past. But can they be held to blame for this? Of course not. And what can civil servants, who have always had the benefit of job security, do when they are laid off after 15 years of steady employment? In all likelihood, not very much. And the same applies to young graduates who have been marginalised by the labour market, as well as artists, journalists and the members of other professions that have been undermined by information technology.

Revolutions emerge when there is a democratic deficit and exclusion from professions and decision making. They are also prompted by intergenerational barriers, and the need to counter the domination of old men.

It is no coincidence that the leaders of the French Revolution were in their thirties, while the decision-makers who attended the 1815 Congress of Vienna, which restored conservative order in Europe, were on average over 60. Today’s European leaders are mostly in their fifties, but in view of the progress of medical science, the overwhelming likelihood is that in 20 years time, Ms Merkel and Messrs Cameron, Tusk, and Hollande will still be in business. Unless they are swept away by a revolution.

For the members of today’s mainly young middle class, all the avenues for advancement have been blocked by billionaires, old men, or people whom they assume should belong in one of these two categories. This is an explosive situation. It would be wrong to believe that young people who are angry with the establishment, but not practised in the usual language of political parties and structured political movements, will never mount an organised revolt. Having said that, revolutions are never undertaken in the name of a particular measure, for example, for stricter banking supervision, but rather because it is no longer possible to live in a particular way. A revolution that is in total opposition to the methods of political parties does not make use of political language. A revolution is a bellowing chorus of rage, the sound of a revolution is disorderly, but on occasion, very audible.

So do we want a revolution or not? As I see it, probably not, because a revolution means total destruction, followed by the construction of a new order. Having said that, our political leaders are still unaware that they are sitting on a powder keg. They do not understand, because they are caught in the thrall of one idea which has become an obsession: to return to the state of stability that prevailed 10 or 30 years ago. What they do not realise is that there is no going back in history, and that their intentions are very much in tune with Karl Marx’s observation that history repeats itself as farce.