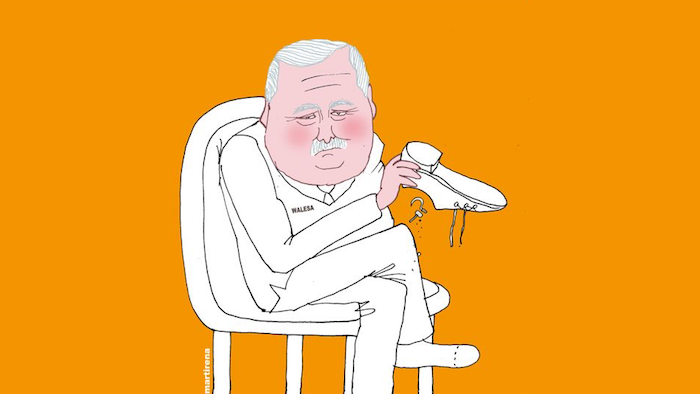 The end of a legend?

Recently found documents suggest the former Solidarity leader had been cooperating with the Communist secret police in the 1970s. Although Wałęsa says they are fakes, the ruling right-wing party has seized the opportunity to trash the former president’s legacy.

Poland is associated with two great figures worldwide: Pope John Paul II and Lech Wałęsa. It so happens that both hit the headlines in recent weeks, albeit for different reasons. First, the BBC aired a documentary analysing the “very close relationship” between Cardinal Karol Wojtyła (later Pope John Paul II) and his long-time friend, philosopher Anna Teresa Tymieniecka. Extremely personal letters seen by the BBC seem to suggest that they could have shared feelings deeper than friendship.

But this sensation was shrugged off in Poland, in the belief that no one except the Poles themselves have the right to dig into the past of the holy man, to say nothing about making such absurd insinuations. Then, a little while later a real bomb exploded after the disclosure of a file containing documents confirming the alleged cooperation of former Solidarity leader Lech Wałęsa with the communist secret police in the 1970s, and this forced all other issues into the background.

The secrets of Bolek’s file

Officers of the Institute of National Remembrance (IPN) confiscated valuable documents from the home of recently deceased General Czesław Kiszczak – the last communist prime minister and former interior minister who introduced martial law in Poland in 1981. His widow had wanted to sell the papers to the IPN, but according to law they should have been transferred to the archives a long time ago. Assisted by a prosecutor, the IPN seized them. And then, without waiting for verification by handwriting experts, it released part of them to the historians and journalists who had been waiting in front of the Institute’s Warsaw office since the early morning hours.

‘Bolek’s’ file (Bolek was the pseudonym allegedly chosen by Wałęsa himself) consists of more than 700 pages of documents, including a declaration of cooperation with the secret police from 1971, signed “Bolek. Lech Wałęsa”, as well as a memo confirming the agreement’s termination in 1976. There are also receipts for money taken for information sold to the secret police. According to eminent historian and member of the IPN professor Andrzej Friszke, “There is no doubt that these documents are authentic. This is evidenced by, for example, their volume and level of detail. It is not possible to reproduce such a comprehensive description of the situation in the shipyard [where Wałęsa used to work] after so many years just to discredit him as Solidarity leader. Nobody would be able to do that.”

This does not mean, however – at least until an expert graphologist’s opinion is published – that the signatures on the documents were actually made by Wałęsa. The former president and leader of Solidarity has strongly denied that he ever snitched on his colleagues, and claims that the disclosed documents are fake. However, most historians seem convinced that agent ‘Bolek’ was indeed Wałęsa. The issue of the alleged collaboration of Solidarity’s leader with the communist secret police has already been debated, at the beginning of the 1990s, and historians have already written several books on the subject. What’s more, Wałęsa himself has admitted the fact to his closest associates.

After the disclosure of the file by the IPN, a storm broke. The ruling Law and Justice (PiS) and its supporters were quick to pass judgement against the former president, hailing him as a traitor and a snitch. “There will be no legend of Lech Wałęsa. It will be a thing of the past, as deserved,” said Defense Minister Antoni Macierewicz. He was seconded by Foreign Affairs Minister Witold Waszczykowski, who insinuated that Wałęsa could have been a mere “puppet” controlled by hostile forces.

These words reflect the opinions promoted by Law and Justice chairman Jarosław Kaczynski for a long time now, wherein the Polish transformation was a conspiracy between Solidarity’s élites and the Communist authorities, and essentially a big scam. Wałęsa and the liberal intellectuals from Solidarity’s leadership had, according to PiS, betrayed the democratic transformation in exchange for lucrative jobs. But if that was the case, why did the Kaczynski brothers support Lech Wałęsa as president in 1990, and continue to do so when he won the elections? At any rate, Wałęsa and the Kaczyński brothers quickly came into conflict, parted ways with a bang, and have been sworn enemies ever since.

The line taken by those who defend Wałęsa, including many former Solidarity activists, is equally expressive. They claim that even if Wałęsa collaborated with the secret police in the 1970s, it doesn’t in any way write off his 1980s legacy as a key player in the creation of the first independent trade union in this part of Europe, when he refused to cooperate with the communist authorities after martial law was imposed (1981-3), and when he was instrumental in the peaceful overthrow of communism and the establishment of a free Poland. “He went through a brief period of falling and rising up again on his own. He was not crystal, but he was heroic,” say his friends. Still, some are also calling on him to openly admit to his 1970s collaboration, confess his sins and apologize to his colleagues, “once again proving his greatness.”

They also emphasize the need to put his alleged collaboration in historical context. Wałęsa supposedly signed shortly after the brutal pacification of the Gdańsk shipyard workers’ protests by the communist authorities in December 1970, when 41 people were killed in clashes with the police and army. He was a young, inexperienced worker who had no idea about the methods used by the communist secret police, and had every right to be afraid.

“Nobody knows whether by signing this or some other document, Wałęsa did not simply save his life. And if he did save his life, and we know his life very well today, we should know that it was worth saving and that he hasn’t wasted it,” argued Paweł Kasprzak, former dissident and Solidarity activist in Gazeta Wyborcza.

How easy it is to judge the behaviour of people involved in a totalitarian system from today's perspective. But the point is not to justify, but to try to understand, which requires effort and knowledge. Flawless heroes can usually only be seen in the cinema. In real life, everybody has moments of weakness. Lech Wałęsa is not entirely free of fault – he could be criticized for his unsuccessful presidency, megalomania, and arrogance – but no one can deprive him of his place in Polish history. And all the more so, as rightly pointed out by Boguslaw Chrabota, Editor-in-Chief of conservative daily Rzeczpospolita, as “No one – no commie – was roasted in Poland as much as Lech Wałęsa.”