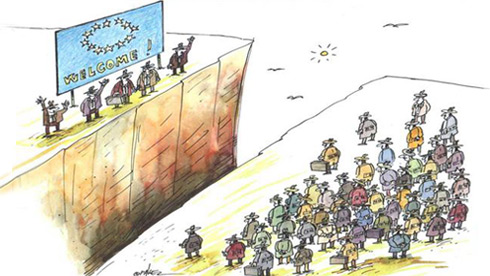 The EU must stop stepping on our toes

Germany has announced that it will veto the entry of Romania and Bulgaria into the Schengen Area. Perhaps it is time for Romanians to stop being the victims of their partners' political games, writes a Romanian journalist in a leader article.

In the midst of an election year, Germany is playing a card already put on the table by Italy, the Netherlands, France, and the United Kingdom showing that remnants of superior and contemptuous behaviour towards the East are still alive and well.

Thus, the official announcement by the German Interior Minister, Hans-Peter Friedrich, warning that Romania and Bulgaria will be greeted by a "veto" at the meeting of the Justice and Internal Affairs council scheduled for March 7, is a confirmation of the obsessions and internal political games of the countries of the EU – a far cry from the principal of equality of treatment for members of the Union.

Romania is once again left on the doorstep of the Schengen Area, and, once again, for reasons that have nothing to do with the requirements for joining. Undoubtedly, Friedrich (CSU – Christian Social Union), a coalition partner of [German Chancellor] Angela Merkel and her Christian Democratic Union, reflects the point of view of the coalition in power in Germany (CDU/CSU) and highlights the electoral stress under which the coalition must operate.

Germany's legendary rectitude has evaporated when one of the leaders of the EU "engine" confuses domestic politics for European politics. Referring to an internal electoral issue, the allocation of social benefits, the German minister speaks about the corruption of the visa system in Romania and Bulgaria. "Those who come only to collect social benefits, and who thus abuse the right of freedom of movement, must be stopped," such is the comment of a minister in power.

The Schengen problem was already treated in the same manner by former Italian Prime Minister Silvio Berlusconi and former French President Nicolas Sarkozy. This diversion tactic, used by the old Europeans to distract public opinion from sensitive domestic issues, is part of a set of tools that renders the EU less and less credible because it is less and less capable of solving its problems.

Recently, the attitude of the United Kingdom, which openly says it will refuse to respect European accords on providing access to the labour market to Bulgarians and Romanians, as of January 1, 2014, also confirms a dispiriting trend within the Union. Using incendiary language, Prime Minister David Cameron brandishes the idea of an invasion of workers coming from the two countries that would have a negative impact on the jobs of Britons. He too is using the foreigner card to re-gild his image back home.

None of this would have been possible if, in Bucharest, the government behaved in a correct and constant manner regarding domestic policies and towards the people. None of Romania's foreign affairs or interior ministers has paid or will pay for the governments' failures and even less for the insulting treatment inflicted by the EU countries on European citizens of Romanian origin.

According to the Romanian Foreign Affairs Minister Titus Corlăţean, "Romania has, de facto, ensured the external borders of the EU since it joined in January 2007. [...] Technical evaluation missions show that all of the Schengen provisions have been implemented in a uniform and correct manner". As a consequence, it is normal to wonder why the European Union is picking on Romania. How much longer will technical issues continue to be used as political and economic blackmail?

The reaction of the foreign affairs minister [saying that Bucharest "would not be interested" in case of another veto,] which was approved by Prime Minister Victor Ponta and rejected by President Traian Băsescu, clearly expresses a social reality, one at least as true as that expressed by Hans-Peter Friedrich: Romanians, who understand the stakes, are tired of Europe's politics of blackmail.

In February, alarmed by the position of Turkey – a important partner at the crossroads between East and West and a member of NATO – Angela Merkel went to Ankara to talk to the Turkish prime minister who is looking more closely at Asia and China now that talks to join the EU are stalled indefinitely.

It is thus possible for the leaders of the EU countries to act according to pressure coming not only from West to East but in the opposite direction as well. For at a time when the United Kingdom is calling for a referendum to exit the Union, perhaps should Romania stop unconditionally accepting to be a market for the products of the blackmail of the larger EU countries.

In the wake of Interior Minister Hans-Peter Friedrich's remarks on immigrants from the rest of Europe, the German press has come out to criticise the prejudices against the Romanians, Bulgarians, and particularly the Roma of these two countries.

In a list of the “Six truths about Roma in Germany" the tabloid Bild says that while "many immigrants are poor and some heavily indebted municipalities must spend millions of euros to come to their rescue,” there is "no mass immigration" of Roma into Germany.

Bild says that "80 per cent of immigrants from Bulgaria and Romania have found a regular job,” and that there are no statistics on the proportion of Roma among Bulgarian and Romanian criminals.

Die Tageszeitung, in turn, notes that

Romanians and Bulgarians with training come here to work. [...]. The fact is, though, that not all of them do find a job. To refer to a 'Roma Express' [...] is a vicious innuendo that is far from accidental. [...] The readiness to see one's own wellbeing under constant threat is a typical German sensitivity. [...] Sometimes it's threatened by the Greeks, sometimes by asylum seekers - but no one fits the bill as well as the Roma. No other group raises as many negative associations, and the Union [of Christian Democrats] has done everything to keep it that way.