Ideas After the Dutch referendum 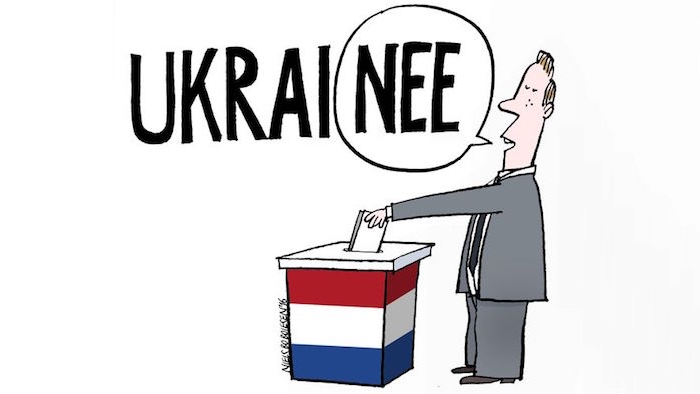 Ideas After the Dutch referendum

The EU suffers another blow

On 6 April Dutch voters roundly rejected the government’s ratification of an association treaty between the EU and Ukraine. It is another blow for the EU, one hardly made better by the low voter turnout (of less than a third of eligible voters), argues Bernard Guetta.

It could have been much worse. It is even somewhat reassuring, since this popular initiative for a referendum to ratify an association treaty between the EU and Ukraine was largely ignored by Dutch voters.

Less than 33% came out to vote on Wednesday – not even a third of all voters – a particularly low number for a country that also rejected the constitutional treaty in 2005 with a referendum. It goes to show that Dutch voters mistrusted a popular initiative whose promoters had lumped together all kinds of narratives: from a pure rejection of the EU to the fear of in influx of Ukrainian refugees to the contestation of Europe’s current political and economic situation. It was also a refusal to expand the EU anew, which is, moreover, not what the agreement is about; the desire to snub the coalition government in The Hague; and the fear of seeing the Netherlands dragged into a military confrontation between the EU and Russia.

The clearer the ‘yes’ vote was – yes to economic association with Ukraine – the more ambiguous clear the ‘no’ vote had to become, since no one knew any more what exactly was being rejected. Abstention has ultimately rewarded the demagogy of willful confusion, but we should not forget that a crushing majority of voters – more than 61% of them – effectively chose ‘no’, a choice that will lead the Netherlands to ask for modifications on the association agreement, with multiple implications.

First, in the Netherlands, like all across Europe, a party of fear is solidifying its position – fear of a new era, immigration, the retreat of national political borders, and the economic and political emergence of new powers taking whole swathes of Europe’s jobs and rebalancing the role of the West.

The second is that these fears may spark a rejection of the EU and the very idea of Europe’s unity, which have come to symbolise the scale of the shifts underway.

The third is the constant erosion of the major parties on the right and left, now existing in a coalition in the Netherlands, and which a whole chunk of Europe’s electorate blames – not unjustly – with not knowing how to respond to its fears.

The fourth is that this evolution in the political chessboard has not only given rise to the extreme right, but has also created convergences and sometimes alliances between them and part of the extreme left. In the Netherlands, like across Europe, national and social question are beginning to merge into a discourse resembling ever more that of the early days of Italian Fascism.

The fifth implication of the Dutch ‘no’ is clearly to mark the retreat of the idea of European unity, and it will continue to retreat as long as its ambition has not been clearly redefined for a century very different from the last.