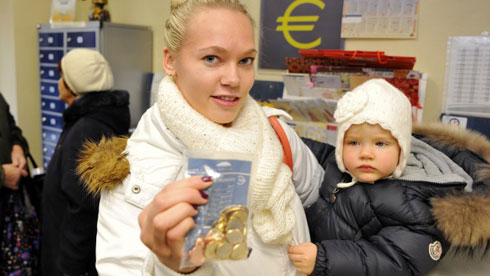 The euro steams in against nostalgic backdrop

On January 1, the Latvians will shift to the single currency. Latvians have been able to buy their new coins since December 10, amid an atmosphere of excitement tinged with concern.

Distribution of euro kits at Marupe post office, near Riga, on December 10, 2013

Security guards dressed in black surround a bank at Brīvības iela, the main street of Riga. The national hero, Lāčplēsis, nicknamed “the Bear Killer”, standing at the base of the statue of liberty nearby, its bas-relief engraved with the Latvians’ war cry of “For the fatherland and freedom!” (Tevzemei a Brivibai), observes with stoic calm everything that passes.

However, only one in five Latvians are convinced that the era to be ushered in on January 1, with the adoption of the euro, will actually be good for the fatherland and freedom. Most fear, rather, the opposite. The men dressed in black are carrying kits of euros into the bank.

Since the morning of December 10, 302 salespoints have been opened where these 800,000 kits are being sold for 10 lats [14.23 euros] each. Buyers turn their new euro coins over in their hands, gazing down at the stamped image of a pretty woman in traditional costume. Should the mood be happy or unhappy? No one knows. Every citizen has the right to buy five of the kits.

A month earlier, in early November, the people lining up to buy the last 500,000 one-lat coins were gripped by melancholy. On one side of these coins is stamped “1 lat”, and the other, “1.42 euro” – the official exchange rate. “[[There is nothing more to do with these images of Latvia than throw them in the trash”, says a tearful Marta, a souvenir seller]].

Zinaida and Aida, vendors in the Salacgrīva boutique, are pleased with the look of the euros that Estonian journalists show them. Although all the product prices in their store are also displayed in euros, the women are confused. How will it be possible to calculate in both lats and euros at the same time, come January 1? How will all that money go into the drawers of the same till?

What Zinaida and Aida fear most is the rise in prices. According to them, and despite the promise of “Honest Euro Changeover” displayed outside the doors of thousands of shops around the country, price hikes will be inevitable.

The classic example is the price of coffee, which is sold in newsstands today for 1 lat. There is no need to be particularly clever to guess that this cup of coffee will soon be rounded up to 1.50 euro for the paying comfort of customers. In a survey of 7,599 price conversions, Latvia’s consumer protection office has already discovered 3,000 errors.

Against the background of confusion and general misunderstanding, Arina Andreičika, head of the Ministry of Finance office in charge of the changeover to the euro, seems unperturbed by the low percentage of Latvians who support the euro. The Ministry, it turns out, has another survey, which shows that [[half of the population backs the single currency and that this proportion is rising steadily]].

According to Andreičika, what has happened has been a great thing indeed, and this is also thanks to the help of Estonia [which adopted the euro in 2011]. To prove the love that both Estonia and Latvia share for the euro, the presidents of the two countries will meet on January 2, 2014 in the small town of Rūjiena (3,000 inhabitants). Together, they will withdraw the new money at an ATM.

Niina and Ella are two friends who meet up every two days in a kiosk that sells chebureki. One is the seller, the other her customer. What brings together them is their enthusiasm for the euro. “Let the euro come!”, they say with a single voice. “But when it comes, let there also come the same wages and prices as in normal countries like Germany, for example.”