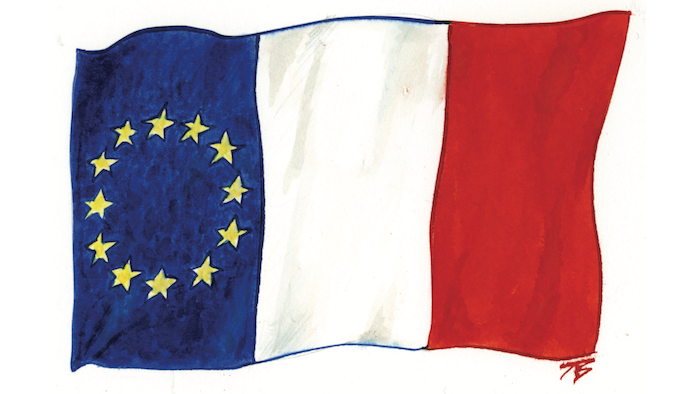 The European single market, a scapegoat for the candidates

Three out of the 11 candidates for the highest office have pledged to withdraw France from the European Union. Not to be outdone, most of the others have spoken out against the restraints imposed by the European treaties and "Brussels bureaucrats". France’s politicians are pretending to have forgotten the benefits of integration.

One of the highlights of the only debate featuring all eleven candidates in these elections was the discussion about the posted workers directive. Most of the contenders – from the far left (Jean Luc Mélenchon) to the far right (Marine Le Pen) – have been viciously criticising this widely unpopular legislation. Even the centre right candidate François Fillon, who is meant to be pro-free trade and free market, has promised to "completely revise this directive" in his program.

Another issue raised during this presidential race is the relocation of home appliance giant Whirlpool’s factory from Amiens (Northern France) to Poland. Far from being the only one virulently criticising the move, the socialist candidate Benoît Hamon has declared that the corporation should “immediately and entirely reimburse all public grants unduly received” through the CICE (Tax credit for employment and competitiveness). While this may sound like a good idea, it is in practice impossible since the stated objective of creating jobs is in no way mandatory for businesses, and pertains more to the government’s utopian wish list.

These tirades, which characterise the opposition to the free movement of workers and capital, challenge the very idea of a European single market. Let us not forget that it was Jacques Delors, a French socialist, far from being the most fervent partisan of unbridled and immoderate capitalism, who gave the impetus to this European single market through the Single European Act. He simply remarked on how establishing a genuine domestic market would benefit Europe as a whole.

Incidentally he was right, given that the single market allowed for the creation of almost 3 million jobs, and raised the EU’s GDP by more than 2 points between 1992 and 2008. He lay the foundations for the “four freedoms” that are nevertheless yet to be fully guaranteed, and may never be. The creation of a single market is more of a continuous process rather than a stage reached at a given moment, and the directive on posted workers contributes to this process.

The document is certainly imperfect since it does not include standardisation of social welfare contributions. However, the presidential candidates’ vehement and hardly constructive opposition to it reveals a more general distrust of everything that comes from Brussels, particularly concerning economic matters. Despite this, it should be noted that thanks to the EU:

• French exports to the EU amount to €271 billion
• Many French people — 650,000, according to the register of French citizens established outside of France, which reflects only part of the reality — live in another EU member state and benefit from the same social and labour rights as nationals.
• French consumers have the right to buy goods from all around Europe without having to pay customs duties, and are guaranteed that these goods meet French standards.
The list of advantages to integration is longer still. French companies massively invested in Central and Eastern Europe after the 2004 expansion, revitalising them and contributing to the development of the French economy.

However if there’s one distinctively French characteristic, it’s wanting to have one’s cake and eat it too. The European provisions that candidates have recently been denouncing contribute to a whole that largely benefits French citizens. If each national government began putting spokes in the wheels of the European project by vetoing texts that require sacrifices from certain groups of population, the EU wouldn’t get very far. European solidarity entails making concessions in certain areas in order to gain in others.

Just four days before the first round of voting, the gaps between each candidate are so narrow that the media are talking about a “four way battle”. Among them, Marine le Pen is advocating for a complete exit from the EU, and Jean-Luc Mélenchon wants to impose his vision of the Old Continent on the other 26 European partners. If this condition is not met, he has threatened to take France out of the EU — a far cry from the EU’s culture of consensus.

Should we be worried about a "Frexit"? We certainly cannot exclude this possibility, but France is a nation capable of measuring the scope of its decisions. And it certainly wouldn’t want to draw a line under the numerous advances brought forward by the EU — not only the single market, but the euro, the Erasmus program, the European research programs, and the guarantee of living on a continent of peace.

Translated from the French by Felix Constant-Hynes