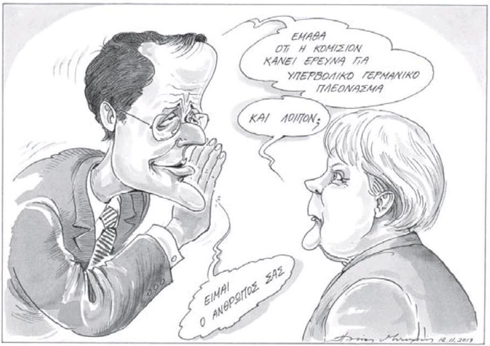 I heard that the Commission will investigate the huge surplus of Germany
German Chancellor Angela Merkel:
So?
Samaras:
I'm the man for you

While Brussels opened a "thorough investigation" of the German trade surplus, which has been accused of threatening the competitiveness of other Eurozone countries, the Eurogroup called on Greece to accelerate structural reforms and to continue the policy of privatisation and fiscal consolidation in order to obtain the release of a new tranche of financial aid. Meanwhile, Samaras has been summoned to Berlin on November 22 for a "working lunch."

You can unsubscribe anytime *
Categories
GreeceGreece