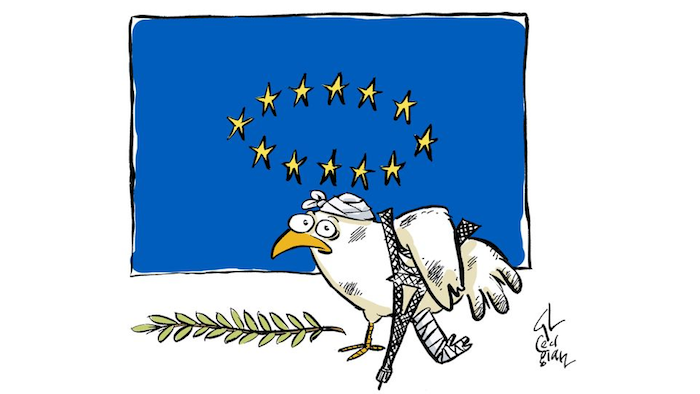 The first sketch of political union?

After the attacks of 13 November, a European country – France – has for the first time requested the assistance of its partners in responding to an act of armed aggression. The unanimous response of the other member states marks a turning point in the Union's foreign and defence policy, argues Bernard Guetta.

After the Paris attacks, everything is shifting, and quickly. We felt it on 14 November at the Vienna talks on Syria, which were concluded well before expected with a consensus on a settlement through direct discussions between the regime and the insurrection that Russian no longer broadly considers to be a "terrorist" organisation.

We felt it a the G20 summit where Barack Obama and Vladimir Putin publicly prioritised coming to a compromise on Syria. In Vienna, like at the G20, we felt that Russia's objective was very much no longer to try and restore Bachar al-Assad the totality of his lost powers, but to stand alongside other world leaders.

A window of opportunity presents itself for the grand coalition against Daesh that François Hollande called for on 16 November and that he will present to Washington and Moscow next week. But it was the day after when everything everywhere picked up pace, particularly in Europe.

On 17 November Europe's defence ministers met in Brussels, a routine meeting during which France was determined to ask its partners to apply article 42.7 of the Lisbon Treaty, which requires that "if a member state is the victim of armed aggression" the other member states are obliged to offer "support and assistance".

This article had never before been invoked, let alone applied. The countries with stronger atlanticist leanings might have preferred to apply the similar clause in the NATO treaty, but the Union accepted the French demand with one voice. This means that for the first time in its history, the Union has unanimously accepted a single defence strategy outside of the NATO framework; this moment is all the more significant since it is not simply a question of symbolic gestures.

From 17 November, a number of European countries offered France material and even troop support. The French government is now preparing to ask its partners for support on its African fronts so that it can concentrate its resources on the fight against Daesh. It is equally likely that Europe's capitals might soon be helping arm the Syrian rebels to attack Daesh in collaboration with the French air force. It is a turning point. It is nothing less than historic: if other member states will have less prominent roles, they are certainly not negligible.

Still on 17 November, Vladimir Putin ordered his armed forces to coordinate with the Charles de Gaulle, a French aircraft carrier sailing towards the Syrian coast, to put together a plan for joint operations. Russia has now well and truly turned its sights on Daesh, rather than bombing the insurrection that it now wants to see negotiate with the Syrian regime.

The policies of the major powers have moved closer together, not in words but on the ground. All our European partners have admitted that the French budget should be enlarged to finance the fight against terrorism. It is not yet political union, but does look more like it than ever before.