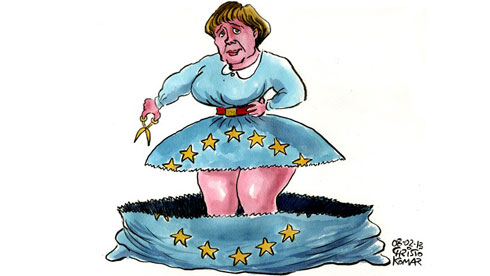 Although German Chancellor Angela Merkel seems assured of victory, the German elections will be revelatory. The results should bring answers to a number of open questions concerning the future of the economy and of European institutions.

Since the beginning of the Eurozone crisis, no other event has been as anticipated as the German legislative elections – with the possible exception of the June 2012 European Council meeting. The September 22 German ballot could signal a turning point in the euro crisis. The European Commission says it is untroubled. Investment banks are counting on Angela Merkel’s victory but remain cautious. This is because the outcome of four variables remains uncertain: the banking union; growth within the Eurozone; the future of Greece; as well as that of the single currency. All of which must go through Berlin.

Angela Merkel is the frontrunner. According to the most recent opinion polls, taken by Emnid, Forschungsgruppe Wahlen and Infratest dimap, Merkel’s party, the Christian Democratic Union (CDU) is credited with 40 per cent of the vote, while the opposition Social Democratic Party (SPD) led by Peer Steinbrück, should garner 25 per cent. This gives the chancellor a comfortable safety margin. According to Deutsche Bank, “Merkel’s victory is a given”.

This view is now shared by Morgan Stanley, but until May, the bank believed that there would be a massive sell-off in the Eurozone after the German elections. If it now believes otherwise, despite the weak fundamentals in the area, it is because liquidities continue to flow on international financial markets thanks to the Federal Reserve, the Bank of Japan and the Bank of England. The new financial order – composed of quantitative expansion, low interest rates and extraordinary measures – could thus also be profitable to Germany and consequently to the Eurozone. Furthermore, investors will not necessarily engage in a massive sell-off after September 22.

[[In the hallways of European institutions, tranquillity reigns]]. “All this excitement around the German elections exists only for journalists. The path taken by the EU to exit the crisis is set and clearly defined,” a Commission official told Linkiesta: In other words, even in the event of a Steinbrück victory, little would change because “the long-term goal remains that of a more-solid-than-ever Europe and Eurozone,” he says. The official admits that “various mistakes were made when the Eurozone was devised,” but believes that if the EU remains on the path to which it committed itself in 2011 with the creation of the European Financial Stability Facility (EFSF), it will be able “to improve the system as a whole by the end of the decade”. Will this actually come to pass?

A turn for the worse?

The new European structure seems to be missing something. The current paralysis of the financial markets is due to transactions conducted over the past year by the European Central Bank (ECB), notably the Outright Monetary Transactions (OMT) programme by which treasury bonds are acquired in secondary, sovereign bond markets to boost countries under pressure. Two hedge funds, however, Brevan Howard in London and Bridgewater in the United States, believe that the German elections will become a turning point in the crisis – for the worse. For Brevan Howard, a Merkel victory may slow down the reform process in the Eurozone. This is an understandable fear given the snail’s pace at which reforms were carried out in the past two years. The blame lies with the Bundesrat or Federal Council, which must approve each of Germany’s administrative expenses, including each contribution to the bailout funds for member states, to the European Financial Stability Facility and to the European Stability Mechanism (ESM).

[[Many issues remain unresolved. The first is the banking union]]. Or better yet, a system that would put EU banks under the supervision of the ECB. The aim is to avoid jolts linked to opaque positions, partially protected by national financial authorities. As indispensable as it is slow to implement, a banking union must overcome two hurdles: the reluctance of German banks to submit to the control of the ECB and Berlin’s multiple doubts regarding the European deposit insurance fund. These are precisely the two points that could soon become major differences between Germany and the other members of the Eurozone.

The second main difficulty concerns recalibrating the relationship between the core of the Eurozone and its margins. […] It will also be up to Berlin to find a new development model for the Eurozone, in particular to battle what economists consider a true plague – unemployment.

And then there is Greece. The viability of its sovereign debt remains a mirage, and a growing number of voices say that so is another restructuring package. This time the “haircut” – the devaluation of the market value of bonds – would affect public creditors. […] The haircut would involve 70 per cent of Greek bonds, which corresponds to the portion held by public institutions from the ECB to the International Monetary Fund (IMF).

Finally, the last major issue: how to redesign the Eurozone? If, on the one hand, a banking union can be a major step towards future financial stability, on the other hand, the priority is to redesign the structure and perhaps the composition of the Eurozone. That would also imply a wide-reaching revision of European institutions and an eventual transfer of sovereignty away from the member states. The problem, in that case, would be to convince German taxpayers.

This will be a difficult task following the bailouts of Greece, of Ireland, of Portugal, of Cyprus and of the Spanish banks. Having said that, in recent months, Angela Merkel has enjoyed a greater aura than in the past. Will this be sufficient to allow investors to rest easy? Probably not. Not unless Berlin actually does decide, through clear and determined action, to take the head of a disoriented Eurozone.