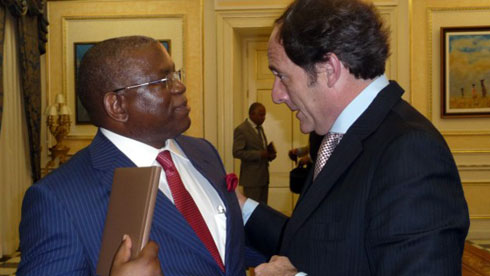 The kindly assistance of the ‘Angola Lobby’

In the second part of its investigation into Angolan acquisitions in the Portuguese capital, French news website Mediapart explores how close ties between Portuguese politicians and the former colony are responsible for "self-censorship" by the Portuguese media, EU and justice system over the issue of the origin of dubious Angolan capital.

Along with Isabel Dos Santos, [the eldest daughter of Angolan President José Dos Santos], other Angolan "entrepreneurs" do their shopping in Portugal. These include General "Kopelipa," an influential minister from Luanda, who has put money into the wines and banks of Angola's former colonial ruler. The principle is always the same. These men and women, benefiting from a privileged relationship with President Dos Santos, made their fortunes under suspicious circumstances in Angola and, now that the crisis is intensifying in Lisbon, are grabbing major Portuguese assets.

"Portugal plays a strategic role for the Angolan government: it allows the business and financial elite to develop an exit strategy in case of regime change by stocking part of their wealth in Portugal. But they also use the country to 'launder' dubious Angolan capital," sums up Jorge Costa, of the opposition Left Bloc, whose book about "the Angolan owners of Portugal" will be published early next year.

A report, published in 2011 by the NGO Global Witness, reviews the particularly opaque accounting practiced by the Angolan oil industry. It shows that, for 2008, there is a discrepancy of 87m barrels between the oil production figures quoted by the oil ministry and those of the finance ministry. This is only one example among many of institutional failures that can only favour the embezzlement of public funds.

Despite the magnitude of these operations, the issue has caused few waves in Portugal. The "diplomatic excuses" of [Portuguese Foreign Minister] Rui Machete [promising to end legal probes into Angolan business deals in Portugal] caused only a ripple of dissent and the interested party was not forced to resign. "All Portuguese political leaders, in power or in the opposition, have fostered ties with forces in Angola, whether on one side of the conflict [in Angola's post-colonial civil war (1975-2002)] or the other," explains former journalist Pedro Rosa Mendes.

Originally a Marxist-Leninist organisation, the ruling Popular Movement for the Liberation of Angola (MPLA) joined the Socialist International group in 2003. It therefore has close ties with Communists and Socialists but also with the Portuguese conservative Social Democrats in power today. "[[The MPLA has always known, with each up-coming generation, how to adapt to the context and it changes allies according to evolving geo-political conditions]]," he adds.

By Jorge Costa's count, since Portugal became a democracy in 1974, after holding office in Portugal, 26 Portuguese ministers and junior ministers have held or still hold jobs in Angolan firms. The current Portuguese prime minister, Pedro Passos Coelho, spent part of his childhood in Angola. The Portuguese press also speculates about the existence of an "Angola lobby" within the government, composed of several ministers who lived in Luanda as children.

Another explanation for the low profile of this almost taboo subject is that Angolan investors have bought up the Portuguese press, which now tends to avoid the issue. Such is the case of Alvaro Sobrinho, a business executive from Luanda who is very prominent in Lisbon. Through his holding company Newshold, he acquired prestigious assets in the crisis-ridden newspaper sector. He thus acquired 100 per cent of the weekly Sol and the daily i, while squirrelling away shares in companies that publish other titles such as the weeklies Visão and Expresso.

"Self-censorship," to use [Human Rights Watch researcher] Lisa Rimli's expression, also plays a role for part of the business sector, especially small- and medium-sized Portuguese firms. They worry that they will lose export markets if the debate surrounding the origins of Angolan funds becomes too intense. In short, the seriousness of the crisis provides an ideal excuse for not looking too closely at the colour of Angolan money.

[[Those who, nonetheless, do dare to publicly criticise this onslaught of investment risk are branded "racists" or "neo-colonialists" by Luanda]]. "I am an anti-colonialist by conviction," notes Daniel Oliveira, a journalist with Expresso, at the beginning of an article in which he denounces the silence surrounding Angolan investment in the country.

If there is unease in Lisbon, other institutions are also conspicuously absent. On this subject, Europe is mute. Marcolino Moco, a former Angolan prime minister (1992-1996) and now one of Dos Santos's most ferocious adversaries, recently wondered about the European Union's silence. "In order to maintain its economic interests with Angola, Europe closes its eyes to the misappropriation," he says.

MEP Ana Gomes goes even further. Europe is an accomplice in this operation, she argues. "Austerity and the privatisation programmes required from Lisbon by Europe have had the effect of increasing Portugal's dependence on Angola. Not only did Europe not say anything, it is pushing even harder for this outcome," she explains.

It is no use expecting the European Commission to take a stand before the EU parliamentary elections scheduled for next year. At the head of the Commission since 2004, José Manuel Barroso, when he was Portugal’s prime minister, was very close to the Dos Santos regime. In 2003, he visited Luanda with 10 of his ministers. As head of the Commission he went on a two-day trip to Angola in 2012 with the aim of reinforcing EU cooperation with Luanda.

Barroso was also an honoured guest at the 2003 wedding of Tchizé Dos Santos, another of the Angolan President's daughters. While more discrete than her older sister, Isabel, Tchizé has just acquired 30 per cent of a Portuguese fruit-packing firm.