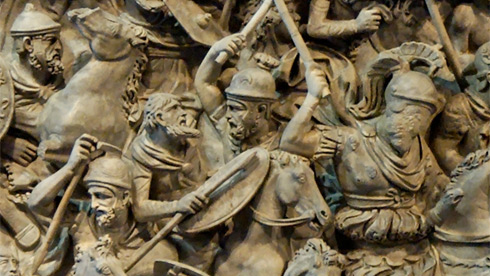 The “Latin Empire” should strike back

Italian philosopher Giorgio Agamben has revived the idea of a union of Southern European countries, a proposal first launched by another philosopher, Alexandre Kojève, just after World War II. This "Latin Empire" could act as a counter weight to the dominant role played by Germany in the European Union.

Detail from the 2nd century Portonaccio sarcophagus, representing a battle between Romans and Germans.

In 1945, Alexandre Kojève, a philosopher who was also a high-level French civil servant, wrote an essay called The Latin Empire: Outline of a doctrine for French policy. This essay [in fact a memo to the head of the Provisional Government, General Charles de Gaulle] is so topical that it is still of great interest today.

Showing amazing foresight, Kojève maintained that Germany would soon become Europe's main economic powerhouse and that France would be reduced to a secondary power within Western Europe. He also lucidly predicted the end of nation states that had, until then, determined European history. As the modern state had emerged with the decline of feudal political formations and the emergence of nation states, so the nation state would inevitably cede the way to political formations, which he called "empires", that would transcend national borders.

These empires could not be based, Kojève argued, on abstract units that were indifferent to genuine cultural, lifestyle and religious ties. Empires – like the "Anglo-Saxon Empire" (United States and United Kingdom) and the Soviet Empire which he could see for himself at the time — had to be "transnational political units but that were formed by kindred nations".

This is why Kojève proposed that France should play a leading role in a "Latin Empire" that would economically and politically united, with the consent of the Catholic Church whose traditions it would inherit, the three major nations whose languages are derived from Latin (France, Spain and Italy), while at the same time opening up to the Mediterranean nations. According to Kojève, Protestant Germany, which would soon become the richest and most powerful European nation (which it did, in fact, become) would inevitably be swayed by its extra-European tendencies and turn towards the Anglo-Saxon Empire — a configuration in which France and the Latin nations would remain a more or less foreign body, obviously reduced to the peripheral role of a satellite.

Today, now that the European Union has been formed by ignoring the concrete cultural links that exist between nations, it might be useful – and urgent – to revive Kojève's proposal. What he forecast has turned out to be true. This Europe that strives to exist on a strictly economic basis, abandoning all true affinities between lifestyles, culture and religion, has repeatedly shown its weaknesses, especially at the economic level.

A Greek is not a German

The EU's so-called unity is beginning to crack and one can see to what it has been reduced: the imposition on the poorest majority of the interests of the richest minority. And most of the time, these interests coincide with those of a single nation, which nothing in recent history should encourage us to see as exemplary. Not only is there no sense in asking a Greek or an Italian to live like a German but even if this were possible, it would lead to the destruction of a cultural heritage that exists as a way of life. A political unit that prefers to ignore lifestyles is not only condemned not to last, but, as Europe has eloquently shown, it cannot even establish itself as such.

If we do not want Europe to inevitably disintegrate as many signs seem to indicate it is, it would be appropriate to ask ourselves, without delay, how the European Constitution (which is not a constitution under public law, but rather an agreement between states, either not submitted to a popular vote or – as in France – flatly rejected [by 54.67 per cent of French voters]) can be reconfigured anew.

We could, thus, attempt to turn political reality into something similar to what Kojève called a "Latin Empire".