Report Humanitarian aid
After the deluge in Nowshera, in North-West Frontier Province

The problem with Pakistan

Three weeks after the Pakistan floods claimed their first victims, Europe is finally reacting. Is this a case of complacency or prejudice, or is there a deeper malaise?

After the deluge in Nowshera, in North-West Frontier Province

Europe’s citizens and governments have been very slow to respond to three weeks of disastrous flooding in Pakistan. Prejudice, complacency, insufficient reporting: there are many reasons for the slow pace of the reaction, but as the European press points out, whatever the excuses, they cannot be justified.

Just ten days after the earthquake in Haiti, a billion dollars in aid had already been pledged. In the wake of the 2005 earthquake in Pakistan, close to 300 millions dollars was collected in only a few days. And this figure pales in comparison to the record-breaking response to the 2004 Indian Ocean tsunami. But as this diagram from The Guardian shows, the 20 million victims of the flooding in Pakistan appear to have left European governments and citizens unmoved — at least to the extent that they are still unwilling to put their hands in their pockets. 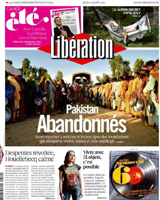 Nearly three weeks have gone by since the beginning of this tragedy and "finally the UN and some international donors are taking note of the massive scale of the disaster," reports the Pakistani daily, The Nation, which notes that "while some states like the US are going on a publicity binge to show off their efforts, other old and steady allies of Pakistan like Saudi Arabia, Iran and China are quietly giving all the assistance they can. But the EU remains niggardly."

"Many Pakistanis are struggling to understand why the response in the West has been so inadequate," writes Pakistani historian Tariq Ali in the columns of Süddeutsche Zeitung. "Some among them," he explains, “argue that Europe and the United States are reluctant to release funds because their country is now viewed as refuge for terrorists. In fact the issue is more complex, but it is clear that the problem has not been solely caused by Pakistan. The reality is that the main factor limiting international aid is the flagrant Islamaphobia that has that has emerged in Europe and North America since 9/11. In a recent poll, more than 50% of respondents associated the word “Islam” with terrorism. "Of course," Tariq Ali remarks, "all of the people interviewed were in the UK, but the British, the French, the Germans, the Dutch and the Danes all think alike. Pakistan is under water and the rest of the world remains indifferent.” And he bitterly insists, “Yes, latent prejudice against Muslim countries is one of the reasons for the lack of international aid. But the problem has also been compounded by another factor which is a specifically local: many Pakistanis themselves are reluctant to hand over money because they fear it will end up lining the pockets of the country’s corrupt politicians." In response, the implacable Jyllands Posten points out that "for years Pakistan has contributed to its terrible international reputation". The country "is now viewed as one of the most dangerous places in the world: a nuclear power with an army that is unwilling or unable to stand up to the Taliban and Al-Qaeda, and a secret service that supports the Taliban." Having said that, even if "it does not benefit from much sympathy, Pakistan still needs massive humanitarian aid," points out the Danish daily.

"Has religious discrimination put a brake on humanitarian efforts?" wonders Libération, which reports that Muslim organsations are contributing more aid than other NGOs. Not at all, responds De Volkskrant, which quotes two NGO representatives who explain that in the event of a disaster like the situation in Pakistan, aid organisations respond immediately and finance operations from their own emergency funds.” 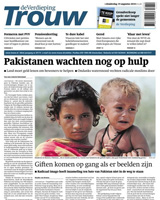 Contrary to what has been said by a large number of commentators in recent days, “the political situation has not exerted a determining influence on the collection of funds,” explains a professor of philanthropic studies at VU University Amsterdam in the columns of Trouw. He further explains that “the level of donations depends on the broadcast footage, which must be moving and regularly updated. At the same time, news of the disaster has to be given priority by the media.”

It is on this basis that Libération calls on other news outlets to make more "noise" about the disaster. "The chronic shortage of footage, and the absence of hard-hitting and moving feature reports have allowed public generosity to run dry," explains the daily, which further reminds its readers of the "elementary rule of aid: our sense of justice responds to reason, but the impulse to give to charity is prompted by emotion. If our feelings have not been stirred, there will be no effort, no initiative, and no solidarity."

Having been conspicuously absent, European aid is now on the way. While France argued for the creation of a rapid reaction force, the Commissioner for Humanitarian Aid Kristallina Georgieva announced that she will “shortly” table proposals for a new EU policy that will be better able to deal with all types of emergencies, reports EUobserver. With pressure building on all sides, the EU increased its aid to 115 million euros (still far from the 460 million total demanded by the UN) and plans to organise an international donors conference in October, reports Süddeutsche Zeitung. "The Europeans have finally had the courage to put the unimaginable suffering of the victims before the negative image of Pakistan in the West," writes the Munich daily. And in so doing, they are taking on a significant challenge: "Those who provide financial resources for the long-term reconstruction of the country will not only alleviate the suffering of the flooding victims, but will also contribute to the cause of peace in the region." However, this will require more financial resources: "Western countries which spent hundreds of millions saving their banks will now have to dig deep to preserve stability in Pakistan."