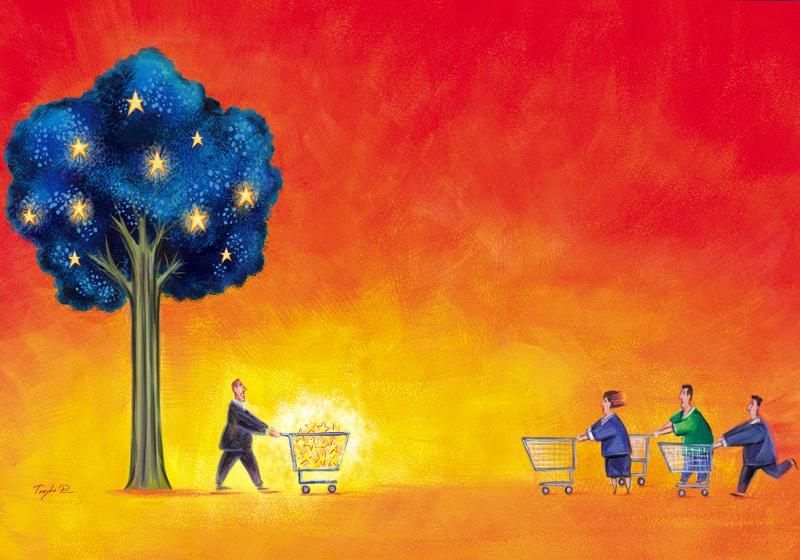 The recipe for a successful conversation about the future of Europe

Just like the Edinburgh Fringe brings informal events and initiatives parallel to the Edinburgh International Festival, the Europe Future Fringe which has just been launched seeks to harness the imagination and expertise of citizens for the democratic renewal of Europe and can help make the Future of Europe Conference a success, says New Europeans’ Roger Casale.

The last thing European leaders seem to want to focus on right now is the proposed Conference on the Future of Europe. It’s overtaken Brexit as the issue that gets “most eyes rolling to the back of heads”.

And yet, as Ursula von der Leyen will remind us in her first State of the Union address, the future of Europe really is at stake.

Europeans need to talk more about the future. What can we do to safeguard the EU project? How do we take Europe to the next level?

Conversation, like cooking, is more of an art than a science. In the end success is all about what we make of the finished product.

As Shirin Ebadi, the Iranian lawyer and Nobel Peace Prize laureate said: “It’s not just about hope and ideas. It’s also about action.”

To start a conversation about the future of Europe we don’t need to wait for a press communiqué from the Commission. The best ingredients will be the day-to-day experiences of people’s lives.

Inspired by the world-famous Edinburgh Fringe, Europe Future Fringe seeks to harness the imagination and expertise of citizens for the democratic renewal of Europe. Over a hundred organisations have already signed up to share their ideas about what needs to happen next in Europe.

Rather than wait for the official Conference to start, the fringe has been busy promoting a wide range of events about Europe’s future.

Energy in the room

Democracy is an abstract idea but as Abraham Lincoln saw, in practice it is all about people. “Of the people, by the people, for the people.”  That’s where the debate about Europe’s future should be heading. We are citizens, not just consumers. We have a voice and a vote. Let’s not forget that sometimes we need to use them.

As Maria Karra, co-founder of the Emfasis Foundation in Greece, reminded us: “Online or offline, there is no substitute for human presence and cooperation. Let’s work on a participatory framework with all the stakeholders onboard; let’s learn from our successes and challenges.” Energising the conversation about the future of Europe, means bringing people together in a safe and relaxed setting where they feel they can speak openly and freely about what matters to them.

At the Odder Tennis Club in Denmark, the conversation is about how to stay fit and healthy during the pandemic. Povl Henningsen, Founder and President of the Club said: “Let’s never forget that the EU’s purpose is to make life better for citizens. If that doesn’t stir interest at all levels of European society, we need to find new ways to start the conversation.”

In a letter to the European Federalist Movement in July, European Parliament President David Sassoli MEP said: “We should make the Conference a real success, leading to concrete actions to meet the expectations of our citizens.” Fine words from a committed European leader. But how are such aspirations to be made a reality?

So far, what we have seen is delay, debate about which “top” politician should take charge of this “bottom up process” and the absence of any perceptible attempt to really engage the citizen. And yet we live at a time when citizens are taking charge of the debate about the Future of Europe, from calls to action on climate change to new ideas about how to reshape the world of work.

The pandemic has brought us together. We are no longer passive spectators as others face life’s challenges. COVID is for everyone. As Laura Bell, Director of Communications at Volonteurope, one of the founding members of Europe Future Fringe has commented: “Civil society organisations and NGOs must be able to claim their right to be part of the solution.”

The curtain is rising. We all stand together on stage in a play which is about to have a record-breaking run at the “Great Theatre of Life”. And as Oscar Wilde once said: “The theatre is the greatest of all art forms, the most immediate way in which a human being can share with another the sense of what it is to be a human being.”

One of the key lessons to take from the crisis is the vital importance of all who keep our hospitals working, supplies moving and daily life ticking over including many volunteers.

We need to listen to what they have to tell us about how things need to change in the future. Here’s Maria Karra again, from the Emfasis Foundation in Greece: “Let’s showcase our volunteers, the true heroes and role models for the younger generation. Inspiration comes from real life stories. When we work together, lives are enriched and society gets better”.

We should also recognise consensus is building in Europe behind bold new ideas such as a minimum income or a shorter working day. Such initiatives point to the opportunity for transformative change in how we live and in the way our societies are organised in Europe. Dominik Kirchdorfer, from European Future Forum, one of the co-founders organisations of Europe Future Fringe, put it this way: “Overnight, remote working has not only been shown to be feasible, but actually necessary and in most cases desirable.  We can learn so much about reshaping the future of work from those experiences.”

Cities are being transformed by the need to find new solutions to the transport and infrastructure needs of citizens.  This offers  new avenues for participatory democracy at local level and invites us to crowdsource the wisdom of the crowd.

Europe Future Fringe will tap into that.

As US Senator Mike Enzi famously remarked: “if you’re not at the table, you’re on the menu.” Ultimately, the key test for a democracy is who belongs at the table. The Black Lives Matter movement has brought this again into focus.  “The racism-driven tragedies in Minneapolis and other parts of the US, but also in Europe, this year, have been a stark reminder that as part of the civil society sector, we need to redouble our efforts to address our own responses and practices” commented Paul Reddish, CEO of UK based Volunteering Matters.

Meanwhile the burning of the Moria camp and the appalling state of others, begs the question as to whether Europe is still able to live up to its self-image as a safe space for human rights.

As Europe struggles to rebuild in the aftermath of the pandemic, it is well to recall that we need to work not just on the next floor of the European House but also repair the foundations.

Strengthening the bond between citizens and the European Union by energising participatory democracy will also make Europe more resilient in the face of significant foreign policy threats, not least from Turkey in the Eastern Mediterranean and Russia.

We only need to look at what is happening in Belarus to understand how lucky we are to live in a European Union where for all its shortcomings, the rule of law, democracy and human right still prevail.

Citizens and civil society are well-placed to point to the key challenges that need attention, and generate the policy ideas, the energy, and the consensus that will be needed to meet them.

At the same time, as Piotr Sadowski, President of Social Platform, the EU’s largest civil society network advocating for a social Europe told us: “We must be free to speak out for all who face discrimination and to remind politicians they are servants of the people.” Facilitating that engagement is what Europe Future Fringe is all about.

More : The case for a citizens-centered Conference on the Future of Europe

For more information on the Europe Future Fringe (Voxeurop is a partner, btw), 👉 click here.

Categories
Conference on the future of EuropeEurope at large