Report Eurozone crisis
The sale of indulgences in "A Question to a Mintmaker". Woodcut by Jörg Breu the Elder (ca. 1530) 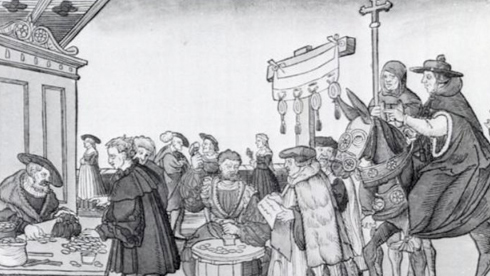 The religion of bribes

Corruption is a key factor in failure of the Eurozone countries facing economic difficulties. They are for the most part, Catholic countries, a religion that has always shown a higher tolerance for corruption than for other sins.

The sale of indulgences in "A Question to a Mintmaker". Woodcut by Jörg Breu the Elder (ca. 1530)

"In today's Europe, corruption is the greatest threat that individuals can pose to democracy. The number of people losing faith in the rule of law is growing," said the Secretary General of the Council of Europe, Norway's Thorbjørn Jagland in January 2013. It is difficult to prove him wrong, especially if you consider that the most corrupt countries in Europe are those that are in crisis – or those that are not democracies (as is the case with Vladimir Putin's Russia where corruption, according to some estimates, corresponds to 20 per cent of GDP).

Portugal, Italy, Greece and Spain. These form the acronym PIGS or, if you include Ireland as was once the case, PIIGS, which was much used by a certain press – mostly English-speaking – to crudely designate the weakened economies of southern Europe.

In short, those countries responsible for the Eurozone crisis. This, of course, is an oversimplification. An industrial region like Lombardy seems to have little in common with the touristic region of the Algarve; a world-class city such as Barcelona appears light years away from the chaos of Athens. Yet there is some truth in the PIGS acronym: the corruption of the ruling class. Is the Milan of the scandals that different from Lisbon? Does nepotistic Catalonia really have nothing in common with Greece? With the press in southern Europe each day reporting the name of another political leader accused of corruption, is the rise of anti-establishment, populist forces so mysterious?

There exists a two-fold risk: of corruption being considered a cultural trait in all of southern Europe, and of falling into the stereotypes of northern tabloids, which describe the Italian, Greek, and Spanish people as layabouts living in debauchery and corruption. Considering that the PIGS are all Catholic countries (except for Greece which is Greek Orthodox), while the least corrupt nations in the world are all Protestant (except for Singapore), the threat of cultural determinism is as strong as ever.

"Cronyism and the neo-patrimonialism of political culture are characteristics of the countries of Mediterranean Europe. In Catholic countries, religion is an important factor for explaining voting behaviour and how the dominant political culture operates," says Luís de Sousa, a research fellow at the University of Lisbon's Institute of Social Sciences and the President of the Portuguese Branch of Transparency International.

"Having said that, excessive importance must not be accorded to religion to the detriment of other structural factors that could influence people's perceptions of corruption and their behaviour towards it. It is said that the least corrupt nations in the world are Protestant but if one looks at the bottom of the ranking, one notes the presence of many sub-Saharan African countries that were colonised by Protestant nations," he adds.

This opinion is shared by Gianfranco Pasquino, professor at the Bologna Centre of the Johns Hopkins School of Advanced International Studies. "Religion counts, of course, but Catholics in countries with a Protestant majority, for example, are not more corrupt than their Lutheran or Calvinist fellow citizens. It is the entire structure of the system that corrupts. Perhaps more than religion itself, the attitude of the [Catholic] Church towards corruption plays an important role. It tolerated it for too long considering that sins of a sexual nature were more serious than those involving money," he explains.

As mentioned above, Ireland was also once included in the PIIGS acronym. But it was actually in this profoundly Catholic country that an astonishing idea to fight against cronyism and to break the ties between politics and finance was born: entrust foreigners with the management of the local banks, blamed for the financial crisis that hit the country in 2008. That is how a British citizen, Matthew Elderfield, the former Chief Executive of the Bermuda Monetary Authority was appointed Chief Regulator of the Irish Central Bank. According to the Financial Times, which published an article on this issue, "The appointment of a foreigner to such an influential position was a watershed moment in Ireland, a small country where family ties, political connections and cronyism have dominated the financial sector."

Mr Elderfield is in good company. The Deputy Governor of the Irish Central Bank, Stefan Gerlach, is Swedish as is the Bank's Chief Economist, Lars Frissell. Dublin thought it was a good idea to exploit the image of the Scandinavians – reputed for their honesty – to give the ruined banking system an ethical burnishing.

Perhaps this idea could be imported, with a few improvements, to southern Europe. Greece and some regions of Italy and Spain could be governed by Nordic technocrats. Denmark, Finland and Sweden are first, second and fourth respectively on the Transparency International's honesty ranking. For them, a society without corruption is possible.