Every year, towards the end of the summer, the same question is routinely raised in several European countries: the cost of gas for heating and light throughout the winter. And 2012 is no exception. For once, Brussels has opened the hostilities, by launching an investigation to establish if Gazprom is abusing its dominant position in the gas market in Eastern Europe. The Russian energy giant also supplies 25% of the gas used in Western Europe. However, its role is much more critical in certain countries like Finland, Slovakia and the Baltic States, which are 100% dependent on Russian gas.

As always, this question highlights the urgent need for a European energy policy, as well as the importance of the quest for alternative supply sources. At the same time, it boosts the temptation to explore options involving “unconventional” hydrocarbons: among them Europe’s reserves of shale gas, which are mainly concentrated in France and Poland, and estimated at 14 trillion cubic metres. As the EUobserver notes, that is enough to satisfy European “gas demand for almost 30 years without buying a drop from Russia.”

This temptation becomes irresistible when we consider how, over the last ten years, the development of shale gas has enabled the United States to cut imports (88% of gas is home produced, and 58% of production is sourced from shale gas) and howthe price of gas in the country has fallen to 1976 levels. So it is no accident that exploratory drilling has gone ahead in Austria, France (notwithstanding the moratorium confirmed by François Hollande), Germany, Poland, Netherlands, Sweden and the United Kingdom.

The trouble is that hydraulic fracturing or fracking, which is the most widely used technique in shale gas exploration and extraction, requires a lot of energy, and is, in its current form, highly polluting — which is why, along with France, Bulgaria, Romania and the Czech Republic have decided to discontinue exploration of known and supposed fields.

Faced with this question, European institutions have adopted an attitude that is at the least schizophrenic, which can partly be explained by the size of the interests at stake and the influence of their representatives in Brussels.

In early September, the Commission publishedthree reports on the subject in which it affirms: 1) that “unconventional gas” could cover 60% of consumption in Europe; 2) that the environmental risks and harm generated by extraction are elevated; 3) in consequence, shale gas must be extracted within a strict legislative framework, even though it does not believe that further regulations are currently necessary.

On 18 September, the European Parliament’s Industry Committee approved a preliminary report in which it affirmed that the EU should not interfere in national energy policies, and that the utilisation of shale gas would reduce Europe’s energy dependency and offer 29% to 41% lower CO2 emissions than coal. The next day, the Environment Committee approved adraft resolution that aims to reinforce regulations to protect health and the environment, and make the industry more accountable for any damage it might cause.

However, it will be hard to reconcile a rush to make use of shale gas with the environmental goals that the EU has set itself: to reduce emissions by 20% relative to their level in 1990, and to source at least 20% of energy from renewables — a category that naturally does not include gas — by 2020, and more thereafter. Like other hydrocarbons, shale gas is not an energy source with a future in the mid- to long-term. Its exploitation will hinder the development of renewables, which are only economically profitable and politically interesting in the context of an energy market straining to meet demand.

If we take into account the progressive phasing out of nuclear power in several countries, the equation that aims to maintain a constant level of energy production, while augmenting the share of renewables and reducing CO2 emissions and dependency on foreign sources, appears increasingly difficult to resolve. It also makes it increasingly difficult to resist the temptation to wait for “a more opportune moment” before moving ahead with what is an urgently needed energy revolution. 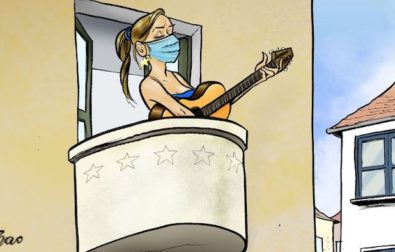 Voices from the confinement