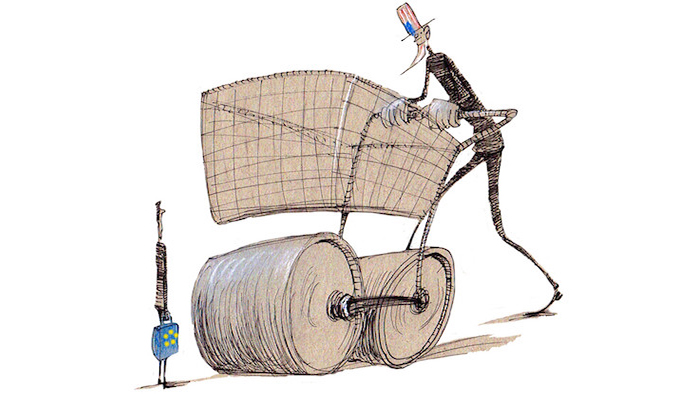 The silent revolution of the TTIP

“Civil society groups are attacking the European Commission, which they accuse of stifling the voices of citizens, and protesting the free trade agreement with the United States,” reports i.

The Transatlantic Trade and Investment Partnership (TTIP) under negotiation between the EU and the US would “harmonise laws on both sides of the ocean to allow major European and American companies to invest and increase their profits on an equal footing in a larger market”, writes the paper.

Stop TTIP, a platform of more than 300 civil society groups, was formed to oppose what it calls “a threat to democracy, the rule of law, the environment, health, public services and rights of consumers and workers”. It has launched legal proceedings against the European Commission in the European Court of Justice, accusing the Commission of “stifling the voices of citizens” after the rejection of a European citizens’ initiative request against the TTIP. The campaign also launched a petition that has racked up more than 850,000 signatures in less than a month.

Carlos Gaspar, director of the Portuguese Institute of International Relations, tells i that “the discussions have happened behind closed doors” and that “journalists and citizens are excluded”. The paper writes —

”The most important thing”, he says, “is to ensure there is effective democratic control over the negotiation process, which is essential for the governments and parliaments of EU member states and of the European Union itself, which will have a greater potential power to intervene in order to defend their interests.” However, the Republican victory in the midterm elections in the United States and their control over Congress will complicate the conclusion of TTIP. Considered a priority by President Barack Obama, [...] it is seen with less enthusiasm by Republicans, who believe it would threaten social protection and labour law.