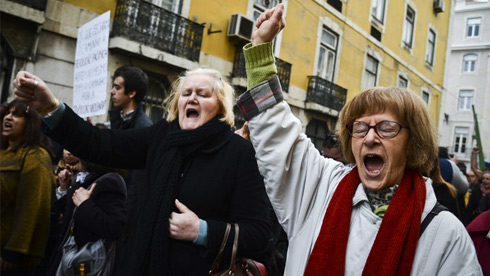 The social earthquake rumbles ever louder

More than a million people of all ages took to the streets of Portugal on March 2 to demand an end to austerity. The growing discontent could bring down the political system that has been in place since the fall of the dictatorship.

Anti-austerity protesters in Lisbon on March 2

Ultimately, September 15 was just a passing episode. In the end, everything did not boil down to just the Single Social Tax, which was followed by the fiscal massacre. Ultimately, the vast majority of Portuguese are not waiting on the mood swings of the CDS [Christian Democratic Party, a member of the coalition] or waiting for the president of the Republic, Aníbal Cavaco Silva, to shake off his profound lethargy, or for what has come to be called the internal opposition of the PSD [the centre-right Social Democratic Party of Prime Minister Pedro Passos Coelho] to believe that its time has come. Ultimately, people took to the streets in the middle of an inspection by the visiting troika to show that they are not the "good people" that one of its bureaucrats seemed to believe live here.

Despite the obvious antipathy that the entire political class appears to deserve these days, the protests of March 2 were not anti-political. They were, rather, marked with more sadness and blighted hopes than those of September. But they are not - not yet, away - desperate. They were entirely political demonstrations, framed in all their symbolism by democratic sentiments. And that, considering the social situation we are living through and the institutional stalemate we are facing, is extraordinary. This may be explained, perhaps, only by the fact that our democracy is still relatively young.

I say “still” because, if the opposition fails to provide an answer to this revolt by coming up with a credible alternative - and not restricting itself to preparing for another spell in power or trying to capitalise on the support for the next elections - the next step could be quite different.

I am convinced that if something new appears on the electoral spectrum next year and proves able to enthuse the Portuguese or to capture their attention, the result would be surprising. That "something" could be positive - but it is more likely to be inconsistent, or even politically dangerous.

One thing leaps out when you look at the Saturday demonstrations: their make-up in terms of age groups. Observers noted a lot of retirees in the crowds, more so than in the protests of September 15. It is on the retirees that the problems of the country concentrate most forcefully - the problem of having been born and raised in a country that is socially, economically and culturally backward. And the problem of carrying, more than all the others, the burden of this backwardness.

One such burden is the miserable pensions, which most of them take as overwhelming evidence of the line that Passos Coelho follows, and that he wants the country to stick to - that we have a welfare state that is far too generous. It's an idea that can spring only from the mind of someone who knows the country only through his party headquarters and the corporate offices of his friends.

One of the things talked about most on Saturday was the children who emigrate, who are unemployed, who are desperate. And the lack of prospects for their grandchildren. In a society such as Portugal, where the family is a kind of complementary welfare state (or even the main one), the old gather the suffering of all the generations under their roof. And they are, themselves, the most sacrificed.

Propelled into the street

Some of the retirees who took to the streets Saturday were participating in a demonstration for the first time in their lives. In other words, they lived through the dictatorship, the 1974 revolution, the PREC [Processo Revolucionário Em Curso], the ongoing revolutionary process - that is to say, the transition to democracy] and through our young democracy without ever having made use of this right. And it is only now, at more than 60 years of age and after almost 40 years of democracy, that they feel propelled into the street.

We live in a time of peaceful revolt that still fits inside the political system, as we know it today. But that system has entered its decadent phase. If the political world persists in not responding to the mood of the country, unpredictable events will take place. I believe (or at least I hope) that they will take place within the spirit of democracy and without imperilling it. After two years of austerity and misery, however, everything can change. In the social protests, much has already changed. It is not only merely a corporatist embodiment of union and partisan structures, and it is no longer even dominated by them. Whether this is good or bad I do not know. It's just how it is.

If the opposition fails to embody a credible alternative, and if the main party of the Portuguese right starts to fall apart, then the first to seize this moment, whether they are serious players or populists, comedians or statesmen, may provoke a political earthquake. Because the social earthquake is already here. Without, apparently, stirring the institutions and parties to react.

“The Portuguese believe the government is preparing to make cuts in health, education and social security,” but instead, they want cuts in public-private partnerships, debt interest and defence. These were the results of a Portuguese survey published on March 5, by Diário de Notícias.

The Portuguese government and the troika of lenders – the European Commission, European Central Bank and International Monetary Fund – which will be in Lisbon until the end of this week for the seventh review of the bailout programme - are preparing new cuts in public spending, totalling around €4bn.
A total of 57 per cent of respondents believe these cuts should be in public-private partnerships, while 36 per cent want a reduction in on the debt interest repayments, and 33 per cent want a drop in national defence spending.