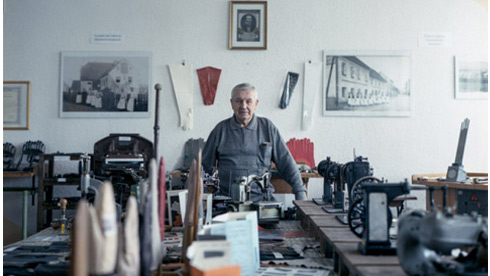 Despite many Sudeten Germans being forced to leave at the end of the Second World War, a small German community survives in country’s west. As their culture slowly disappears, those who remain look back at the decades of coexistence with the Czechs.

It’s well below zero in Abertamy. The side street is covered by a thin layer of ice and the heaps of old snow are piled in the square. In the centre stands the dilapidated Hotel Uran, missing a few windows and some bricks. Two grey-haired men are walking on the pavement in front of the hotel. The Abertamy in which they grew up was very different: three times the population, dozens of bakers and craftsmen, and carefully upkept houses.

Gerhard Krakl, 73, and Paul Schreiber, 79, still talk with each other in the Albertamy German dialect that was spoken by their ancestors for centuries. Not only will that dialect disappear from the streets of Abertamy with the passing of their generation; the entire culture of the Germans of the Ore Mountains will disappear too. For 500 years it shaped the inhospitable borderlands, and it outlasted the expulsion of most of their Sudeten compatriots. Today, what is left of this community will melt away forever into the surrounding Czech sea.

“Gerhard and I once walked through Abertamy and thought about what will actually remain here after we’re gone,” says Paul Schreiber. They don’t want their generation to leave behind only German-sounding surnames and graves in cemeteries carved with German lettering. And so on their walk the old friends came up with the idea of establishing a glove manufacturing museum, which thanks to them, stayed on in Abertamy after the war.

Roughly 150,000 of the 3m Germans in the Sudetenland avoided the post-war expulsion. Most often they were irreplaceable workers, without whom the nationalised industries in the borderlands would have collapsed. There were also peasants who simply could not leave, because Germany, devastated by the war, was unable to take them in.

The Western Ore Mountains became the last territory where Czech Germans were seen and heard.

The family of Paul Schreiber was not given the official stamp of “specialist”, and had to leave in the transports for Bavaria. Under the new laws, the Schreibers had to wash the floor, set the table in the kitchen, and hand over the key to the front door to the national administrators. For a month they then lived in a camp in Nejdek, 12km away, and waited for the train to transport them to Germany. But that train never came, because Bavaria had stopped taking in new exiles.

The Schreibers returned to Abertamy. Their house, though, had already been taken over by another family. Officials assigned them to empty buildings elsewhere in the village. Up in the attic they stored away the wooden box marked with their name and original address, in which they had taken away from their home the 50kg of necessities they were permitted.

In the Abertamy glovemaking factory, internal company correspondence was in German until the end of the 1950s. Even in the early 1960s, more than half of the children entering grade one did not speak Czech. Their parents could not teach them, because they themselves did not speak Czech. At home they spoke German, and somehow always managed to speak it factories, in offices, and at the doctors. They tuned into Bavarian radio stations and trusted to their news broadcasts and weather forecasts. Up to the beginning of the 1990s, salespersons commonly spoke German with their clients. And even today, now and then, they greet each other over their fences with a “Grüss Gott”.

A haven for Germans

Their churches and the Catholic faith also remained as havens for the Germans, which set them apart from most of the new settlers in the area. Up to the 1960s, masses were crowded with German believers, but their number is gradually shrinking.

The Ore Mountain Germans did not live quite in the Czech Republic, nor in Germany. This was not such a ground-shaking change for the Germans as it might seem, though. Even before the war and under the Austro-Hungarian Empire they lived mostly in their mountains, did not worry too much about the political centre of the State, and very rarely left the village they were born in. Home was a place they left only under the most dire necessary, and its simple irreplaceableness was the theme of most of their folk songs. The old inhabitants who escaped the deportations were especially pleased that they could stay put and simply carry on with their lives.

It was 1948. Razor wire began to be strung up along the borders between East and West, the era of the expulsions was over, and it was clear that the family of Berta Růžičková would remain in Czechoslovakia. Half of her neighbours vanished before her eyes, and the Germans who were left were a small minority in a state that was overwhelmingly ethnically Czech. “All of them were gone and we were left here alone. We were used to each other, and all of a sudden there was silence,” she says thinking back to the time when overnight they became members of a national ethnic minority. “To feel foreign in your own homeland was terrible. Nothing was any longer ours. It’s hard to describe. I can’t complain about anything at all, though; no one ever held it against me that I’m German.”

The old Ore Mountain inhabitants and the new settlers from other parts of the Czech lands, however, quickly stopped being foreigners to each other. Love also took no account of ethnic boundaries. “My husband spoke Czech, and I answered in German. We didn’t know exactly what we were saying to each other, but we understood each other without those words. And much later I learned Czech from him,” Berta Růžičková laughs.

End of an era

The generation of people now in their seventies, eighties and nineties gradually got used to the new society. They adopted the same strategy as most Czechs in the era of communism: withdraw into one’s own private world, try not to be provoked too much, and accept fate.

It was as if there a culture of silence set in among the last of the Sudeten Germans – so different from the culture of nostalgia cultivated by their former fellow countrymen now on the other side of the border. Those often set up a “homeland room” (Heimatstube) at home and decorate it with mementoes of their Sudeten past. When they get together they sing folk songs and listen to talks given in their vanishing dialects, which differ slightly village to village. From the early 1950s exiles from the mountains began to put out the Neudecker Heimatbrief, which still finds more and more memories of pre-war life in the homeland to publish.

At the end of the 1960s the [Sudeten Germans who had stayed on] were permitted to ask to be allowed to leave [for the West], on payment of a few tens of thousands of crowns. As they left, the number of local Germans fell below the critical limit that a distinct culture needs if it is to survive. They still talked to each other in the streets in their dialect, but it was becoming harder and harder to pass the language down to the next generation. German was not particularly popular in the society around them, and indeed, during the Cold War few realised that the borders would be open again one day and that knowing German would be a good thing once again.

In the 2001 census, one in seven people ticked the box for German nationality. In theory, the municipality should qualify for bilingual signs. By now this no longer applies. Within 10 years, the number of Germans fell from around 200 to 70.

A man with a very deliberate way of speaking, whose Czech has no trace of a German accent, grasped clearly that something with a long history was coming to an end. In the 1990s he was the last director of the glove factory, which was unable to deal with the waning popularity of walking gloves and could not compete with cheap gloves from Asia. The proud glovemaker, as head of the factory, oversaw the inevitable end of the manufacturing tradition, which before the Second World War had employed over 10,000 people in the Ore Mountain villages.