The temptation to retrench

Battered by the crisis between France and Italy over the north African immigrants who landed on Lampedusa and were blocked at the French border, the Schengen agreements are now being openly questioned by Paris and Rome. On April 26, Nicolas Sarkozy and Silvio Berlusconi announced they are in favour of “changes” to the accord on the freedom of movement.

Rome’s decision to grant temporary residence permits to migrants, which allows them to travel within the Schengen area, has pushed Paris to restore border controls with Italy to block those attempting to join friends or parents in France, sparking a diplomatic mini-crisis that Nicolas Sarkozy and Silvio Berlusconi are trying to defuse. But the damage is done: incapable of finding their balance faced with the consequences of the ongoing revolution in the Arab world or of resisting pressure from domestic anti-immigrant parties, EU leaders are succumbing to the temptation to retrench.According to La Tribune - 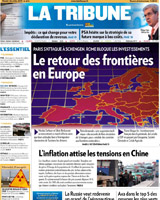 “It started in Rome with the founding treaty of 1957, which guaranteed the four European freedoms: unimpeded movement for goods, services, capital and people. And it is in Rome where we are beginning to unravel the joint work of two generations of Europeans”.

It also notes that -

“... the meeting between Nicolas Sarkozy and Silvio Berlusconi is likely to signal a reconsideration of the Schengen agreements and point to the dramatic resurgence of economic nationalism on both sides of the Alps. Certainly, illegal immigration is a real problem: the arrival of illegal migrants penalises the societies that have to absorb them, starting with those immigrants who have already been legalised. In seeking to contain the illegal influx, defending national borders that just yesterday were the borders of Europe has become a sign of the times. Following the euro crisis, which has every chance of blowing into a major financial disaster, it is now the single market that is under strain. What a fiasco!"

“Given the half-heartedness of opinions and the approaching election hurdles, resurrecting European borders to stop illegal immigrants from North Africa was just a matter of time,” writes Le Figaro in much the same vein, adding that -

“... the Berlusconi/Sarkozy compromise [...] will undoubtedly precipitate reform…. After the Franco-Italian summit, the schedule of Twenty-Seven has already come to a stop. In ten days, on May 4, EU Commissioner Cecilia Malmström should announce the new deal, including the possibility of shifting or duplicating the Schengen borders inland, depending on the threat. Eight days later, on May 12, an extraordinary meeting of interior ministers will prop up the reform. And in late June a European summit will have to implement it.

“Having bet too much on the external border, Europeans have been left without national protection once the Schengen armour has been breached or submerged. [...] Paris wants to broaden the range of countermeasures, Brussels is reflecting on them, and Italy remains to be persuaded that the others are indeed lending a helping hand. The Schengen countries as the point of first entry for illegal immigrants are entrusted with defending the entire system. Italy, Cyprus, Spain, Greece and Malta, are the ramparts overlooking the Mediterranean. These five countries are calling for “operational and financial support” from their partners.

"In the meanwhile, however, the treaty has no fall-back plan in the event this first line fails. An “elastic” European defence perimeter and more resources for Frontex, the agency that ought to monitor the 50,000 km of borders of the Union, should be hastened along as a matter of urgency.

"Apart from that, it is clear to all that the only permanent solution lies on the southern shore of the Mediterranean [...] For the 2011-2013 period, Brussels is planning to redirect all aid to its southern neighbours, or four billion euros, with an additional envelope that could reach 140 million for Tunisia. The EU summit in June may decide on further extensions. Subject to conditions, of course."

Another French newspaper, Libération, reports that - 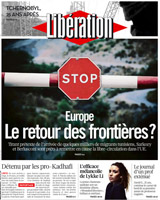 “Free movement within the Union is on a different level from the euro or the Erasmus university exchange program: it is a revolution that has profoundly transformed the lives of tens of millions of people, who can now come and go without passport or visa. It is proof that Europe, which is sometimes a monster of bureaucratic abstraction, also knows how to substantially increase freedoms and transform the Utopian ideals of yesteryear into new rights for citizens of the member states. That is the significance of the Schengen area: and it is that progress, which is both historical and democratic, that is sticking in the throats of the nationalists and opportunistic politicians of all stripes who dream of recovering, at the earliest opportunity, the old attributes of sovereign Nation States”

Which is why, according to the leftist daily -

“... ‘going back over’ the safeguard clauses of these agreements is in reality an attack on what is left of the European dynamic. It flatters the xenophobic fractions and the Europhobes among the national electorates by pointing to the negligence of Brussels – the classic turn that still wins rapturous applause. Finally, it knowingly confuses the real threats, for neo-populism is far more dangerous than a few thousand Tunisian migrants”.

That is why, too, La Tribune is beginning to wonder if -

“... imperceptibly, the far right” is not “trying to set the political agenda of the continent, building on the immense fatigue that has invaded the peoples of Europe.”

This far right, embodied in France by the National Front (FN), whose popularity threatens Sarkozy’s reelection in 2012, and in Italy by the Northern League, a key member in Berlusconi’s majority government, has haunted the Rome summit, writes Massimo Nava of theCorriere della Sera:

“The FN and the Northern League are true ‘guests of stone’ (harking back to a supposedly illustrious past) at the Rome summit, in company with the spectres of nationalism (from the ‘true Finns’ to the ‘real Dutch’) that have ghosted across Europe and are starting to shape the responses of living governments.”

The intention to reform the Schengen agreement, announced April 26 by Sarkozy and Berlusconi after their meeting in Rome, leaves European integration a little the worse for wear, emphasises Nava -

“In practice, as with the Stability Pact, national demands and sensitivities require a watering down of the rules that make up the building blocks of Europe. According to this logic, Europe will continue to be a formidable crucible of internal tensions and a weak engine driving the common policy. The problem is that questioning the Schengen rules will not halt the flow of desperate migrants. The revolution in the Maghreb, like that in communist Europe, is playing out in historical time, not that of television”.

Once again, echoes Cesare Martinetti in La Stampa, Nicolas Sarkozy and Silvio Berlusconi, “two leaders going through an identity crisis”, have “together placed their hands on the head of the scapegoat meant to deflect onto itself the discomfort of a public opinion disturbed by the same malaise: Europe”. As announced by the head of Italy’s government, they have sent a joint letter to Brussels in which they ask “the European Commission to come up with the mediation that they themselves do not want and are unable to find. A common European policy is absent. The EU has run out of steam not just in Rome, but in Paris and Berlin too." After the Rome summit -

“... each will go back to working out his own political puzzle. The Prefect of the Alpes-Maritimes will block Tunisians coming from Italy, Italy will issue unnecessary permits, Brussels will promise to step up Frontex activity in the straits of Sicily, and Berlusconi and Sarkozy will try to get through this rough patch. Until the next crisis.”

An agreement that penalises us

“France and Italy insist on Schengen reform” makes the front page of the Bulgarian daily *Dnevnik*, which illustrates the story with a photograph of the French frontier post at Menton. Following the postponement of Bulgaria’s accession into the Schengen area, at the sole initiative of France, the issue is a particularly intriguing one for the Bulgarian press. According to Dnevnik, Paris and Rome are responding to “pressures from populist and xenophobic movements” in France and Italy. The analysis is shared by Bucharest’s Romania liberă, which holds that by reforming the freedom of movement, France, which also opposes Romania’s accession to the Schengen area, “will be able to push aside one of the key tools of European unity.” According to Poland’s Dziennik Gazeta Prawna, Germany has also agreed to reform the Schengen agreements and to draw up a special cooperation fund for north African countries amounting to ten billion euros. Diverting that much money would be to the detriment of the finds that help Poland and other central European countries, writes the Polish newspaper with some unease.