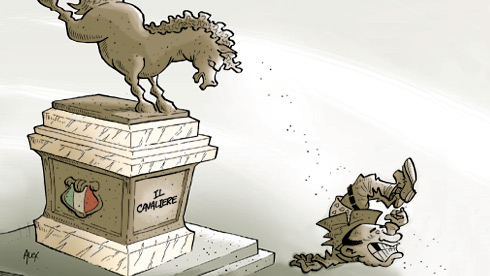 The twilight of Il Cavaliere

Silvio Berlusconi, repudiated by some of his associates, who forced him to back the vote of confidence in the Enrico Letta government, and in the process of being ousted from the Senate – a committee is to decide on October 4 whether he should be stripped of his seat – Il Cavaliere is moving towards an inevitable exit from the political stage.

For the first time in 20 years, a political crisis has been averted not thanks to or in spite of Berlusconi, but in a spirit of absolute indifference to what Il Cavaliere, trapped for days now in a downward spiral that has seen him flip-flop on his position at least a dozen times, could do or could not do.

The fact that at the end a turbulent parliamentary day, the leader of the centre-right, standing almost petrified, announced personally to the Senate, to general surprise, that he would back the vote of confidence – after ordering his ministers on Saturday to pull out of the cabinet and after asking his Senators to vote against the motion only shortly before the vote – has had no impact on the outcome of the complex game of poker that is being played out these days.

The cards had already been laid down, ever since the dissidents in the PDL announced on Tuesday night that they would not be abandoning the government, which left the government with the support of a sufficient number of parliamentarians to assure it a new majority in the Palazzo Madama [the seat of Italy’s Senate].

The man who had been the symbol of the second Republic, the linchpin of all the political transitions during the last 20 years, the leader who had always managed to play a pivotal role not only in his own camp, but in the opposing camp as well, has become superfluous everywhere. Berlusconi did not return to his bench, and it took him a few hours to grasp what had happened. Then, when he had grasped it, he resolved to be useful and to vote for the government, to avoid seeing his party split up. His charismatic leadership, which until Monday had enabled him to avoid any form of internal debate, collapsed very suddenly.

‘Confused, to say the least’

[[In the blink of an eye, gone, laid low by a storm of insults and ridicule posted on Internet message boards by centre-right voters]], who were confused, to say the least, by the incomprehensible confusion with which Berlusconi had steered his failed foray at bringing down the government.

Everyone now agrees that the new majority – almost equal in numbers to the previous majority, but anchored by the agreement between the prime minister and the most responsible fraction of the centre-right – has given birth to a new leader, in the person of the vice-president of the Council.

And there is no doubt that [vice-president of the Council and number two in the PDL] Angelino Alfano has played a key role in this crisis, refusing from the start to provoke a split in the PDL, working until the last minute to persuade Berlusconi to back down, and managing, not only through his power of persuasion, but also thanks to the consensus that in the meantime he managed to reach within the parliamentary groups, with senators and deputies who were now willing – for the first time – to disobey Berlusconi. Alfano, perpetually criticised in the past by close colleagues for a certain lack of courage, this time showed some muscle.

Birth of an ‘emergency axis’

Beyond the contortions and the crisis of a leadership that had grown weary a long time ago – despite the robust showings in the elections, the chants of “Silvio, Silvio!” and the emotional connection of the Italians to Berlusconi’s personal setbacks – what culminated so spectacularly yesterday was already in place at the very start of the political overture. Not peace-making, which Berlusconi mistakenly saw as the end of his troubles – and that all of his latest manoeuvres had helped prevent – but rather [[the birth, with the blessing of the president of the Republic, Giorgio Napolitano, of an “emergency axis” between Letta and Alfano, the Castor and Pollux of the government]] – an axis that proved to be made of stainless steel.

It is too early to say how far a shift of this magnitude, which only appeared to be sudden and surprising, will take us. Among other things, we are living through the end of a changing of the generations, with all the repercussions that can logically be expected. It may be that, leaving behind the economic crisis and at the end of a legislature that at this point has won at least one more year of life, we are witnessing a new standoff between a centre-right and a centre-left that have been deeply changed, and now more closely resemble the centre-right and centre-left parties of most of the other countries of Europe. It’s pointless to deny it, though: the weight of Italian tradition and the roots of the protagonists of this new phase should not be underestimated. In other words, it is possible and perhaps even likely – and fear-inspiring, depending on the point of view – that the Christian Democrats may not survive the coming of the Third Republic.