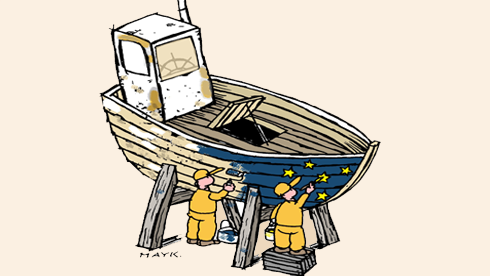 The upside of the crisis

In this climate of recession, EU member states have managed to find common ground on longstanding divisive issues: overfishing, asylum rights and the management of borders. Proof, says a Swedish columnist, that Europe is capable of speaking with one voice.

The European Union is still mired in economic decline, but the larger picture is not quite so grim. Member states have recently displayed a greater will to overcome deep-rooted and long-standing disputes.

In this regard, the agreement reached at the end of May on reform of fisheries policy is much better and more pro-active than many feared it would be. If the signatory states implement the provisions that they have accepted, halieutic reserves could be restored to a level that will guarantee their stability. On this issue, Europe has shown that the union can function as a vector for positive energy. There is no other international structure that deals with the question of overfishing. And given that most oceans are not subject to regulation, it is hard to prevent their shortsighted exploitation elsewhere in the world.

At the end of the day, we always agree…

A few weeks ago in Brussels, the hitherto burning question of the restoration of border controls between member states was also resolved by a new legislative package. Only a few years earlier, France and Italy attempted to push through new rules that aimed to give member states the right to reintroduce passport controls, and Denmark was also demanding permanent checkpoints on the Øresund Bridge [which links Denmark to Sweden].
However, European Commissioner Cecilia Malmström, who is herself from Sweden, took a stand against the impulse to restrict the mobility of citizens and succeeded in imposing her point of view. The precise rules are worked out in the new package, which even proposes to limit member states’ authority to establish border controls on their own initiative.

On the question of asylum policy, member states have also finally succeeded in establishing common ground. After endless negotiations marked by profound disagreement, a year ago, hardly anyone believed an agreement was possible. Then suddenly last spring, the divergences were transformed into convergences.

On June 12, the European Parliament voted in favour of a new asylum system, which will impose stricter rules on the welcome granted to refuges and the processing of asylum applications. According to Cecilia Malmström, the introduction of these new measures in all member states will result in general improvement on current practice. Of course, we are not quite there yet. And it should also be pointed out that not all of the provisions of the agreement are equally praiseworthy. In particular, the storing of asylum seekers’ fingerprints in the Eurodac database implies a centralised management and surveillance of individuals that is excessive.

Sudden will to compromise

Nonetheless, the agreements on fishing, borders and asylum policy amount to so many steps in the right direction. It is also worth bearing in mind that just some days ago, the European Court of Justice ruled that, in accordance with the terms of the Dublin II regualtion, unaccompanied refugee children cannot be transferred [from one country to another], which is a testament to the humanisation of Europe.

How has all of this come about? One source told me that the Commission succeeded in grinding down member states: after years of talks, they simply grew weary of holding out and moved to find common ground. Others put forward a political explanation: Nicolas Sarkozy and Silvio Berlusconi, two leading proponents of the re-establishment of internal European borders in recent years, have both lost control in their respective countries.

But there is a further explanation of member states sudden will to sudden will to compromise. Although divisive and on occasion the cause of disputes, economic difficulties can also be vectors of unity: the crisis has shown that countries are both vulnerable and dependent on each other, which has added to the drive to stick together.