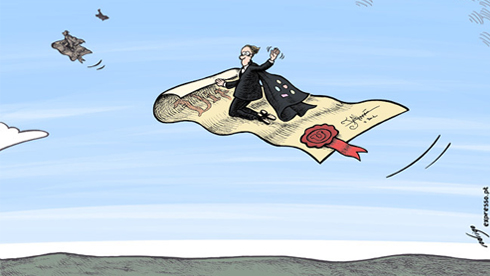 The writing on the wall is Mandarin

One out of four Portuguese young people is unemployed. To find work, these youngsters are ready to become expatriates, and the languages they learn before leaving – German, Russian, Chinese or Arabic – draw a map of their new promised lands.

These days, there is not a single Portuguese business hiring experts in robotics programming. Gonçalo Gomes, 30, saw his fears become a painful reality as each job application he sent out remained unanswered. To make matters worse, his wife Marta, a 25-year old nurse, is only offered short-term or part-time contracts bouncing from one clinic to the next.

"We then decided to broaden our horizons and to send our applications abroad. And last June, we obtained encouraging answers from some German firms. The only problem was that they demanded we speak German," Gonçalo says. He and Marta signed up for an intensive German course at DUAL, the training department of the Portuguese-German Chamber of Commerce and Industry in Lisbon.

"We receive many requests from German firms seeking skilled labour in different sectors," confirms DUAL head Elísio Silva. "In most professions, knowledge of the language is essential. Thus, learning German can’t hurt anyone," he adds. This does not mean that English is losing ground. But speaking today’s lingua franca is not enough to distinguish oneself from other applicants. In most professions, knowing the native tongue is obligatory.

Meanwhile, Portugal is going through a serious crisis and is setting a record high unemployment rate, especially among young peolpe. It is close to 40 per cent for those under 25, and many Portuguese understand the growing influence of some countries in the global economy – countries in Central Europe or Germany which continues, against all odds, to post positive growth, but some further afield as well. In recent years, the rise in demand for classes in Russian, Arabic and Mandarin clearly shows where today’s economic powerhouses lie.

Given China’s continued growth, no one will be astonished that Mandarin is most in demand. Various courses have appeared in recent years. Among the most sought after are those aimed at children. These are chosen by parents particularly worried about their children’s futures.

China represents more than the future. It’s robustness in all economic sectors is already a fact. And if English is taught in the schools of the Middle Empire, the lack of practice and especially the cultural differences are such that foreigners are forced to master at least rudimentary Mandarin.

"The Chinese are always pleasantly surprised to discover that we speak Mandarin," says 21-year old Sara Veiga Silva, who holds a degree in Asian Studies but also a Mandarin proficiency certificate from the Confucius Institute.

If China is the major economic power of the moment, it is not alone. Recently, faced with a diminished national economy, Portuguese firms sought money wherever it was to be found, notably in the Arab countries which welcomed, with open arms, their expertise in a wide variety of sectors.

"There are already 100 [Portuguese] companies and 6,000 to 7,000 Portuguese workers throughout the Arab world; these are the most dynamic markets," says Alloua Karim Bouabdellah, General-Secretary of the Arab-Portuguese Chamber of Commerce and Industry.

"But knowledge of English or French is not enough. Many Arab business executives barely master their own language and it is always much easier to do business when you speak the same language as the client," he adds. Although their country is deep in the doldrums, the Portuguese seem enthusiastic in this area, claims Professor António Dias Farinha, Director of the Institute of Arabic and Islamic studies at the University of Lisbon. "In my university alone, we have over 100 students studying Arabic and there are many other programmes here and in other cities," he says.

Forsaken for many years, the language of Tolstoy and Dostoyevsky is attracting more and more practitioners. And with good reason: Russia is in full economic expansion buoyed by energy reserves on which the countries of northern and central Europe depend.

"We noticed a growing interest in the language three years ago. Currently we have over 200 people registered for the two semesters of Russian," says Rita Marnoto, Director of the Languages, Literature and Culture Department of the University of Coimbra. Students are aiming for jobs translating or with Russian firms working in Portugal. But emigration is also an option considered by many students.

Among wealthy Russians, Portugal is trendy. Many Muscovites with well-garnished portfolios go there on holiday, preferring it to other resort locations such as Greece, Egypt or Spain, precisely because it is more expensive. This allows them to show off just how healthy their personal finances really are.

In addition, these communities from the East, Russian-speakers settled in Portugal, constitute a major market for some sectors, even if a large part of these immigrants speak Portuguese.

But one does not always have to look on the other side of Europe or of the globe to find a solution. Just on the other side of Spain, also deep into a crisis almost as bad as ours, is a country with apparently healthy finances. That is the gamble made by 23-year old Joana Rodrigues, who has a degree in biomedical engineering.

"Because I want to work abroad and English is not enough, I decided to improve my French," she says. "There are also Belgium, Luxemburg and Switzerland," she adds. If France lacks the economic dynamism of Russia, the Persian Gulf or China, it has a definite added attraction – it’s not too far from home.