White paper on the future of Europe 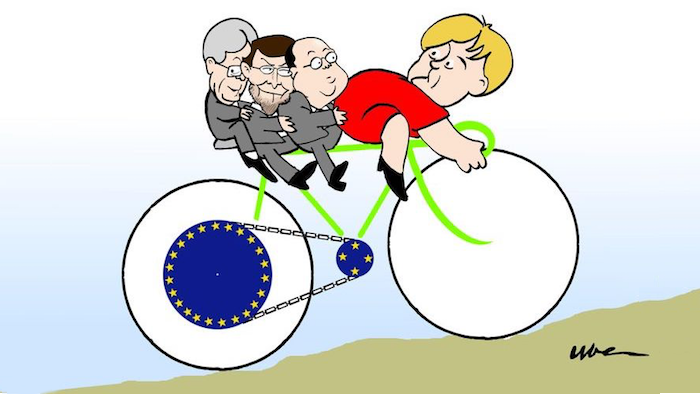 White paper on the future of Europe

On the eve of the 9-10 March European council meeting, French, German, Spanish and Italian leaders held an informal mini-summit at Versailles, where they approved the idea of a “multi-speed Europe”.

This was one of the five possible directions suggested by Jean-Claude Juncker— president of the European Commission—in his white paper on the future of Europe. For European editorialists, this is not enough to revive the EU, which celebrates it's sixtieth anniversary on the 25 March.

The mini-summit at Versailles did nothing to calm the tension between EU member states, argues Eric Bonse in the Tageszeitung:

Things are going full-speed for European politicians. In two weeks' time they intend to celebrate 60 years of the EU's founding treaties at Rome. But the mood among the twenty-eight member-states is hardly celebratory. Many are angry because Angela Merkel has pushed forward with the debate on a “multi-speed Europe”. They feel excluded. Criticism doesn't just come from the Visegrád group. Finland and Austria also have major reservations. Even the EU Commission is unsatisfied with the debate on the future of the EU. A week ago it presented five scenarios for a reform of the EU, but these haven't occupied much of the discussions. Only the third option, according to which Germany and a few partners would move ahead, leaving “slower” member-states behind, seems to have any attraction for Merkel. At a mini-summit in Versailles, France, Spain and Italy were also favorable to this option. When it comes to the Euro or taxation, they want to take the fast-lane. But nobody knows what direction Europe will take after Brexit, not even Angela Merkel. There is therefore still plenty to be done before the summit in Rome. And instead of joy, there's trouble in the air.

Jakub Majmurek explains that “in a 'two-speed Europe', the illusion that all member- states want closer integration will disappear. The divide between the central core and the rest of the EU will grow ever wider.” A trend which will have no small consequence for Newsweek Polska's editorialist's homeland –

The countries that are currently integrating will be less inclined to ally themselves with those countries that are less well off—like Poland—which will be progressively pushed away from the centre. In a two-speed Europe, it will not only be more difficult for us to access European funding, but also to argue for our interests. Outside of the main circle of integration, we can forget our dream of playing a central role in shaping EU policy on energy, defence and Eastern politics. This is all the more troubling since, in the case of tensions between the US and Russia, we'll need European solidarity to ensure our security with regards to energy and the military.

What effect will Brexit have on the rest of the EU? Will it lead to disintegration or a new push for cohesion?”, asks La Stampa editorialist Stefano Stefanini –

The four at Versailles have no doubt that the Union should proceed along the lines of a 'multi-speed Europe'. This is not a new idea. [...] The uniform response of the 27 to the June 23rd referendum [on Brexit] shouldn't deceive us: it is defensive and essentially guided by the protection of national interests. Unity is more apparent than real; it is inexistant when it comes to the future of the EU; everyone has their own preference. An EU à la carte might be an expedient tactic and an exercise in consensus, but we still have no idea where the EU is heading. There are four directions too many in the five proposed by Juncker in his white paper on the future of Europe.

“The EU white paper is rather gloomy”, claims the Dagens Nyheter/ “Signs of internal conflict and an aging population are evident. And the global influence of Europe is dwindling.” The five scenarios proposed for avoiding a two-speed Europe hardly fix the problem, the editorial claims, recalling that an à la carte EU already exists, since not all member states are in the single currency. On the contrary, there is a risk that, under many of the directions proposed,

important values will be lost when the directives of the EU become an entanglement of various rules and engagements. Further, it is likely that the smaller countries will lose their influence in a multi-track EU.